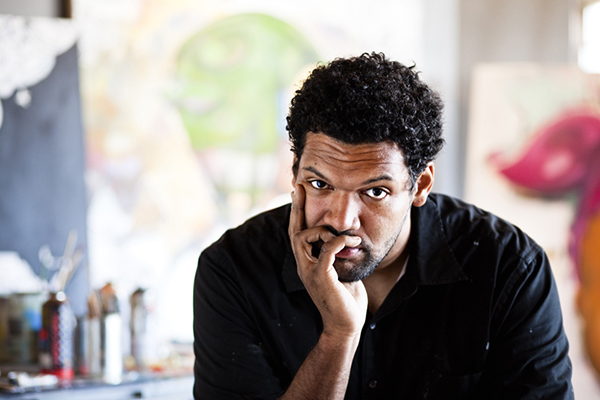 Hebru Brantley is a rock star in the art world. He has drawn comparison to the revered and iconic Neo-expressionist/graffiti artist, Jean-Michel Basquiat. He travels the globe exhibiting his work in premier art shows like the famed, Art Basel, and he has a diverse collection of high profile celebrities and peers that laud his work. Brantley, though, neither eschews the notoriety nor measures success by such merits. At his core, Hebru Brantley is a griot, a bard, an allegorist, a provocative visual storyteller armed with a kaleidoscope of colorful images and limitless life inspired anecdotes. His canvases range from the brick walls and concrete streets of the urban terrain all the way to the digital landscape. Ultimately, the main place he seeks to paint is the canvas of the mind. 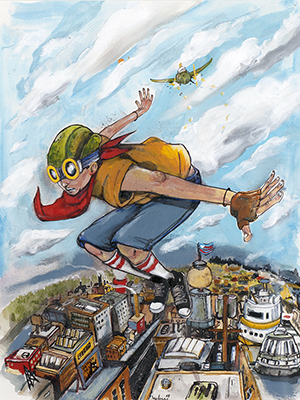 On a mission to engage audiences and spark a conversation in all who bear witness to his art, Brantley’s explosive trajectory thus far has provided a space to see that mission manifest. In between paint brush strokes of genius, iRock Jazz caught up with the Chicago native to talk storytelling, Afro-Futurism, and how his mother’s doodling helped create his unique style.

iRJ: How would you describe your artwork?

HB: Very heavy in narrative. It’s storytelling. It’s single frame animation. It’s Afro-Futurism. Some of those are probably the easiest ways to quantify what I do. It’s hard because I work in layers and many styles, so it poses a challenge when someone asks me that question, but nevertheless, it’s heavily narrative based.

iRJ: How early in your life did you start creating?

HB: I don’t know the age, but as far I can remember I’ve been in it and doing it. From a very early age I always had an affinity for art. 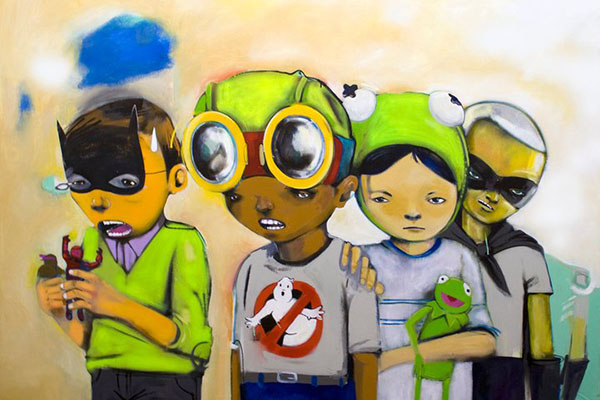 iRJ: Does music help you create? Who are your favorite music and visual artists?

HB: Music plays a large part in my creative process. My favorite musicians are Sun Ra, Flying Lotus, and Chance the Rapper. My favorite visual artists are Trenton Doyle Hancock and Fahamou Pecou.

iRJ: Was graffiti a big influence on your art?

HB: Oh absolutely. That is sort of where my style came from initially. I always idolized my older step brother and the older kids. Hip-hop and graffiti culture definitely played a huge role. I used to do it more often than I admitted to. But, yes, it played a role. The times have changed so drastically, that before finding certain images or finding out about certain artists took some effort. You had to either hear about them and do your due diligence through magazines or whatever means were available at the time because there was no internet and it wasn’t as simple as typing in artists’ names and  finding them. So, it felt more rewarding finding certain artists and styles when I was younger because you felt that gratification. You had worked to find them. That’s what made the journey so rewarding for me as a kid.

iRJ: Your art is laced with a lot of social issues and subliminal messages. Where does that derive?

HB: Just being astute to the happenings of today and yesterday. I don’t try to be over political or overly conscious. I don’t try to force feed a message to the audience. It kind of comes about in the way that I create. It’s sort of a natural thing. I think I’m directly influenced by what is happening around me and it comes through in the work. It finds its way through the work. 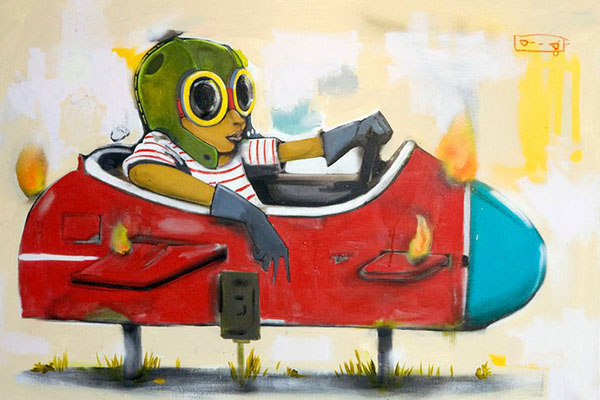 HB: I think that remains to be seen just given my time. I’ve been creating my whole life so it feels like forever. But as far as the recognition that I aspire to obtain, that remains to be seen. I know that one of my goals is to definitely affect culture on a state level first and foremost to affect those in Chicago that wouldn’t otherwise look at art or step into a museum. My goal is to garner their attention – people on the South Side (Chicago), the West Side, East Side, wherever. I want to engage those that aren’t otherwise with the music and the arts. I want to engage those who live one sided lives and little microcosms that they are born into. From one block to the next, that’s their stomping ground. That’s my mission. I’m not certain how it’s working because I think that a lot of my time is spent traveling or in the studio working. So I don’t really get to see what the art has done other than what’s being told to me or what I see on social media. From what I’m seeing on social media there is definitely a response and the response is growing and I want it to continue to grow. Romare Bearden said basically, ‘An artist’s job is to report the times; to be a documentarian’. That’s what I aspire to do. When someone looks at the gamut of the work that I have created through my life it can directly correspond with the times in which I lived in.

iRJ: Is there a responsibility that you have to use your medium as a platform to show what is going on in the world today?

HB: I don’t feel responsible to do so. I don’t feel a weight or burden to do so; I mean I think it’s a natural thing. I don’t think about it or feel obligated to do it. It’s a call and response and something that has happened over time, but I don’t feel a responsibility. I don’t pretend to be a teacher or pretend to be anything other than what I am. It’s sort of introducing certain equations or questions into the conversation and not necessarily sitting back while the conversation is going on, but sort of pulling myself away and seeing how the conversation takes hold and seeing how what I’ve done is digested and processed.

iRJ: You have developed a certain amount of things that is your style. How would you define what you define as “Afro-Futurist”?

HB: Well, I am a child of pop culture whether I wanted to be or not. It’s who I am and I think that with Afrofuturism, obviously to be a futurist is to predict and talk about certain things, not necessarily otherworldly, but projections upon the way that you see the world becoming, shaping, or being. And there is a lineage of very popular futurists that have come before me whether in music or animation or filmmaking and so forth. There wasn’t a definitive term that was coined to talk about these people, so you have people like Parliament Funkadelic. I mean they were some of the biggest, commercially successful Afrofuturists. Obviously there was the whole thing with the mothership and very much about the free love, drugs, and so forth on down to their costumes. It mimicked that time in which they were coming out obviously. Even today, you have Janelle Monae and Andre 3000 and guys like Flying Lotus. Back in the 1940’s and 50’s you had Sun Ra, who was a very notable jazz musician that was definitely ahead of his time. That’s another part of a futurist too – sort of being and existing in a time where your audience isn’t even born yet. You are sort of playing for the future in a sense.

iRJ: You have a creative process that is your free form way of journaling. Explain what that is and how you came up with that?

HB: My mother was a notorious doodler that lacked artistic ability. I think it was something inherited from her as far as my approach to the work. When I’m going to a canvas or approaching a piece that I may have an idea of where I want to go, I do these little sketches and illustrations and it developed and became its own style. 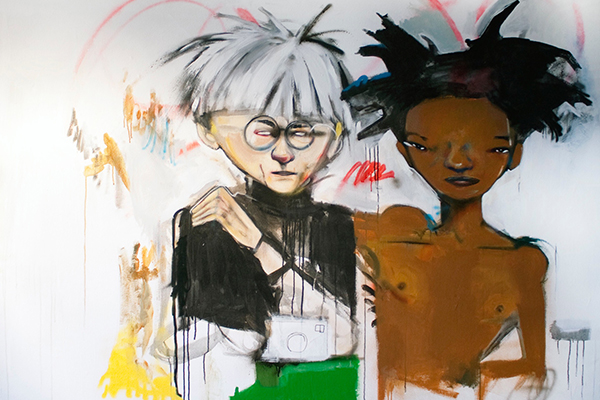 iRJ: You have been compared to Jean-Michel Basquiat a lot. He was iconic in his work. How do you feel about being compared to such a great artist today?

HB: I feel like it’s unfair to Jean-Michel. People are always quick to compare someone to someone else. That’s just due to a lack of explanation or a lack of resources. I don’t aspire to be Jean-Michel. He is definitely someone that inspired me and still does, but I think the comparison exists because there is a lack of African-American artists that are very non-traditional that paint in a certain style or create in a certain way and I just happen to be one of them. I work in a feverish pace. I work fast at times and slow at others. The work doesn’t have a boundary, the themes are sort of scattered. They go from right to left and left to right. And in that way it’s very much similar, but I don’t think the comparison is fair. I’m definitely no Jean-Michel Basquiat. It’s still appreciated; obviously to be compared to one of the best is flattering for sure.

iRJ: In Miami you sold a piece to Jay-Z and everybody made a big deal of it. Tell me the story on how that happened?

HB: I don’t really talk about the Jay-Z thing. That is a moment that happened, but it’s not a moment that defines my career nor do I want it to. I was lucky and fortunate enough to get a piece in a very, now, reputable art collection, which is the Carter’s Collection. I think that is great for any artist. It’s something that I’ve always wanted as an artist, for the art to be in good collections. And so it is. 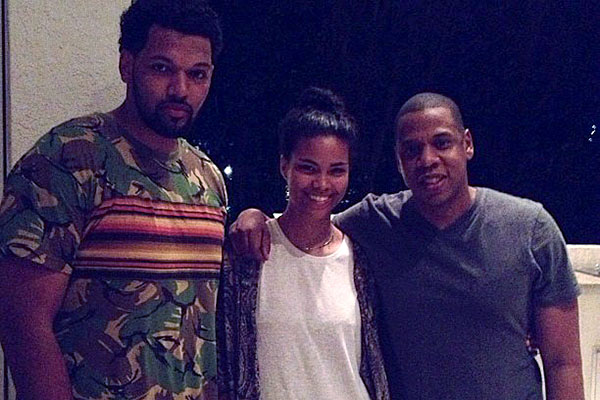 iRJ: How does the Chicago art scene compare with the rest of the world and what is your favorite city for art after Chicago?

HB: Comparing Chicago with other cities is hard. Chicago is a growing arts market that has yet to truly define itself. It is complex with many facets, yet an arts network that is still burgeoning. My favorite city, especially for public art is Miami.

iRJ: Life as a creative can be a struggle in the beginning and sometimes scary. What was the turning point that helped you decide to be a full time artist?

HB: I’ve always been an artist so it was only a matter of time before I became a “full-time” artist. Creativity for me happens constantly and I’ve had the opportunity to do it full-time and create on my own terms.

Producer John W. Comerford: The Making of "Icons Among Us"