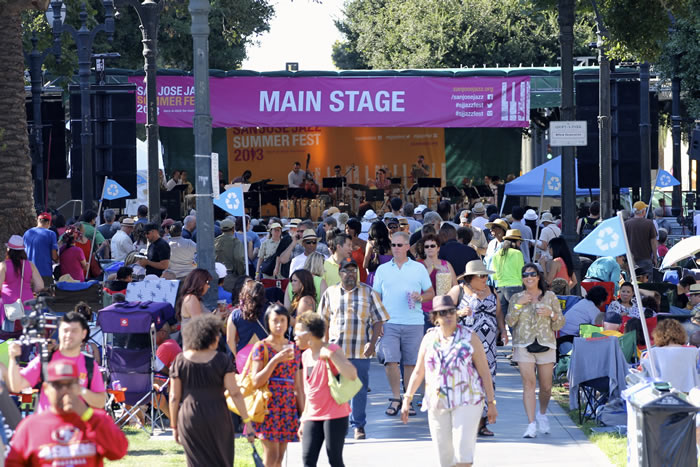 San Jose, one of the most advanced tech hubs in the world—home to tech giants like eBay, PayPal, and Cisco—usually marches to the beat of 0’s and 1’s, but August 8th-10th, the heart of Silicon Valley beat with the pulse of the harmonic melodies, venerable voices and musicians, and the rising sounds of local and regional talent during the San Jose Jazz Summerfest.

This year marked the 25th anniversary of the Summerfest, the most expansive outreach effort of San Jose Jazz, which also produces over 150 live events every year including the increasing popular, Winterfest which takes place in late February.  The fest is well positioned both in terms of location and timing, as the Silicon Valley rapidly becomes one of the most desired locations for work and play in the United States.  Festival attendees ranged from loyal concert lawn dwellers with coolers, blankets, wine and cheese in tow, to mobile music lovers bouncing from stage to tavern to hotel armed with camera phones and streaming music apps launched and ready to discover new music.

The fusion of established artists and new artists was characteristic of a modern jazz festival.  The programming, though, was not heavy laden with one particular genre, and gave the fest considerable depth and variety.  A diversity of styles and genres reflective of the regions eclectic mix and cultural blends complemented the colorful multiculturalism of the Silicon Valley.

The first night, the shortest day of the three day affair, was kicked off with a funk fest led by funk pioneer Bootsy Collins and followed by Bay Area natives, Con Funk Shun at the Kaiser Permanente Main Stage.  The night ended with sets from adventurous bassist, songwriter/producer, Gizmo and versatile pianist, Kris Bowers at the Jazz Beyond Stage curated by Universal Grammar at the Blackbird Tavern.

Saturday proved to be the main draw as the Brooklyn based, Grammy Award winning jazz/R&B collective, Snarky Puppy, started a fire that the Soul Rebels kept smoldering until Bay Area native, Grammy nominated, Ledisi, finished the night with a memorable set where she covered Al Green’s classic cut, “Let’s Stay Together”, the title track to her 2011 release, “Pieces of Me” and other songs.  Her nearly unlimited range and clear tone in a live setting once again proves why she is one of the most sought after and acclaimed vocalist today.   Fans of Snarky Puppy formed a line around the Blackbird Tavern that stretched nearly a city block, for an opportunity to hear the band perform in smaller, more sonically intimate setting in which Snarky Puppy has mastered their groove.  Band leader, Michael League, organist, Cory Henry, drummer, Robert “Sput” Searight, a dynamic duo or guitar players, and a brass trio treated the wall to wall crowd with cuts a variety of cuts from their vast catalog.

Sunday’s headliners included Monty Alexander and the Harlem-Kingston Express, Poncho Sanchez Band and Guests with a Tribute to titan Latin jazz percussionist, Armando Peraza.  David Sanborn, Joey DeFranceso, Warren Wolf and Byron Landham closed out the Main Stage.  In line with the San Jose Jazz educational mission, the Summerfest featured a host of high school, youth, and county bands at the Next Gen Stage.  A host of special events, film screenings, after parties, a gospel brunch, and even a Jazz Mass rounded out the fest.

As the Silicon Valley continues to grow and diversity, the San Jose Jazz Summerfest is perfectly positioned to be an outlet of vital cultural, artistic and educational expression.