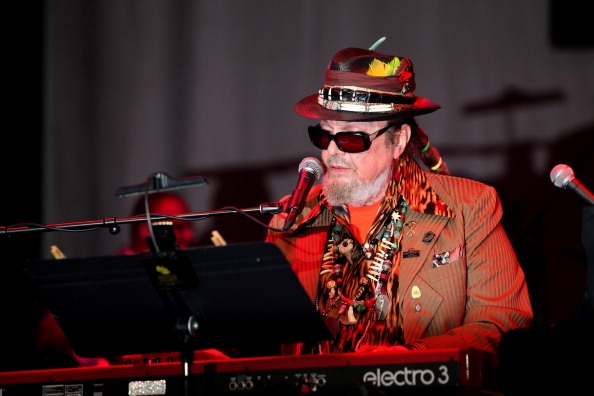 The most difficult part of discussing Dr. John is deciding where to start. It’s hard to track a man that has lived more than most. And when I say that, I don’t mean years; I mean experience. When you think of Dr. John, what comes to mind? Voodoo? Drug addiction? New Orleans? All of the above? I can’t answer that question for you, but I can tell you what he means to me. When I think about Dr. John, my mind moves well beyond music. For me, Dr. John exists in this ethereal realm of legend and Louisiana folklore. As much as Dr. John is a part of the tradition, he has become one himself.

“Louis’ spirit came to me and told me to do something; that’s how this whole thing started. Louis told me, ‘Take my music and do it your way.’ It was the most unexpectable thing in the world to me, to have Louis’ spirit show up like that, but he gave me a concept of where to roll with it that was spiritually correct.” – Dr. John

This sort of mystical language should not come as a surprise when you consider the source, but even in all of its airiness, the statement relays an important message: This is the music of Louis Armstrong, but Dr. John is going to be Dr. John. The actualization of this is thrust upon us almost immediately. The very first voices you hear are not that of Dr. John, but instead the Blind Boys of Alabama. As their voices come together in harmony, a precedent is set. While many, including Armstrong, have approached, “What a Wonderful World” with a certain sentimentality, almost drawing its listener to tears, with a splash of horns and some vibrant piano play for Dr. John himself ,and we’ve got a party. In Dr. John’s world, life is a celebration, and in it, he’s making not so standard standards.

Recreating a tradition is something to which Dr. John is no stranger and that doesn’t stop after one track. Take for example his reinterpretation of “Tight Like This.” Enlisting the talents of trumpeter Arturo Sandoval and lyricist Telmary Diaz, the record is turned into a slow-winding sensual adventure. It’s the right temperature for a hot summer night, and Dr. John nails it. This is not what Armstrong had in mind in ’28, but it’ll do just fine with a contemporary audience.

And then there’s his engagement of “Sometimes I Feel Like a Motherless Child.” A song that more often than not conjures memories of solemnity and tightly bound choral arrangement, Dr. John makes it modern R&B. Assisted by Anthony Hamilton, the song works to the point of almost not even feeling like a standard, but instead a cut from the latter’s next album.

Not to be outdone, Dr. John throws his infectious vocals alongside those of Shemekia Copeland on the colorful duet “Sweet Hunk O’Trash.” Of the many records explored on this album, it’s the closest to matching its historical counterpart, and yet the arrival of some incredibly pronounced guitar play almost completely contradicts that notion. Louis Armstrong may have written the story, but it’s Dr. John who’s telling it.

Even as I wax poetically on the merits of these cover jobs, perhaps the strongest selection comes from a composition not actually written by Armstrong. Growing up in the black church, “Nobody Knows the Trouble I’ve Seen,” is a song I’ve known my entire life. Just about everyone has tried their hand at it, from the Sunday morning singer to Louis Armstrong himself. It’s beyond timeless. Dr. John knows that tradition and even goes to the extent to embrace it wholeheartedly, but this isn’t that old time religion my grandmother grew up with. Yes, it still drips with vestiges of gospel chords and organ play, but it’s as modern as reading the Word from an iPad. It’s got bounce, and it’s got a little flavor, and when you consider the lead vocals contributed by the otherworldly Ledesi, you get the crown jewel of this project.

You’ve got to respect Dr. John. Conceptually, he chose to take on one of the most ambitious projects of his entire career. Playing with the music of Louis Armstrong is like telling the world you can make a diamond shine that much brighter. How do you add beauty to something so flawless? In the case of Dr. John, you don’t try and make it better, you just try and make it you. That’s what “Skee-Dat-De-Dat” means–innovation. It’s about taking the music and making it definably yours, and that’s exactly what Dr. John does. This album is the preservation of the legacy of one of music’s finest artists while making something that is completely Dr. John. It’s technically sound, it’s highly eclectic, but, above all, it’s just really fun in that way only Dr. John knows how to capture. That’s the spirit of Satchmo.