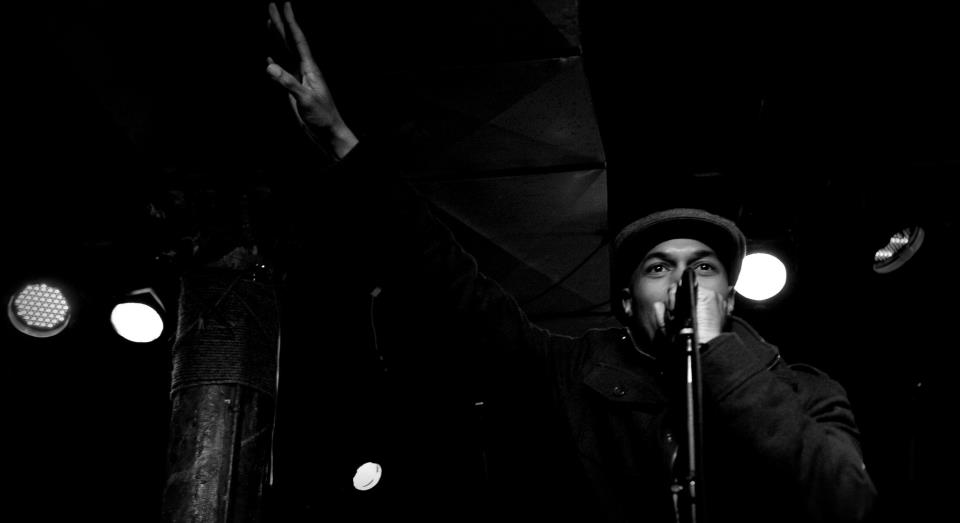 Jazz, born in the narrow streets of New Orleans evolved into America’s original art form eventually finding its way into nearly every boulevard and avenue round the world. Hip-hop, born in the concrete jungles of the South Bronx by youth desiring a creative outlet to combat social ills is now a juggernaut woven into the very fabric of worldwide culture. Like jazz, hip-hop is no longer defined by its origin, which allows people from various backgrounds to use the art form to share their unique experience. Enter emcee, producer, and professor, Brian “Raydar” Ellis. Raised in upstate New York and Connecticut, in affluent communities with corporate executive parents, Ellis is using his experiences to innovate in music, culture, and education. Whether releasing new music, working with music luminaries like Esperanza Spalding and Chris Dave, or teaching students from Berklee College the music and influence of revered hip-hop producer, J. Dilla, Raydar Ellis is doing his part to continue the expansion of jazz and hip-hop to new audiences.

iRock Jazz spoke with the self-proclaimed, “hip-hop connoisseur and jazz aficionado” about why hip-hop needs his voice and perspective, J. Dilla’s monumental influence, and his advice to emerging artists.

iRJ: Tell me about how you started?

RE: I started my hip-hop journey in middle school. I came home from the movies and my dad was flipping through the channels and passed MTV. On the screen there was this guy sitting in between two project buildings strumming an acoustic guitar with graffiti painted on it. The next shot is on a rooftop, there is a sister with twists in her hair wearing army camouflage rapping this ill verse. And this was on the rap show, “Yo! MTV Raps”, but here’s this guy playing the guitar. At the time I was deep into classic rock and roll, I had funk and soul records. I had heard hip-hop and I had been though Harlem in the 80s because my aunt lived there. My first memory of Biz Markie singing, “Nobody Beats the Biz” was on 138th Street. It was dope and cool, but it didn’t really connect with me yet. So, the video was the “Vocab” remix by The Fugees. I was blown away because Lauryn Hill was kicking these ill rhymes and I was like ‘Wow, how is she saying all of these words’? And I am connecting with a bunch of it.

iRJ: What are some of the experiences in your life that strengthened that connection and set you on your current path?

RE: I was a black kid growing up in a white neighborhood with parents trying to climb their way up in the ladder of corporate America. My parents always made it a point to keep a balance of my history because when I walked outside of the door I wasn’t going to get that at my school. The most my school gave in terms of Black History was a few weeks in February to talk about Martin Luther King. So, when I saw The Fugees rapping about it I was like, ‘Wait a minute, those are the people that I understand’. I’ve read articles about this. That kind of set me off. It blew me away. So, I was like, ‘I’m in it. I’m totally going to do it’. I started buying hip-hop records, started dressing in baggy clothes, and started listening to the beats. I then began to notice a lot of the records had beats that were sampled from many of the records in my dad’s collection. Like Black Moon’s “Who’s Got the Props”, I have that jazz record, so I understood the samples. I wrote my first rhyme on the school bus. I rapped for my friends. I was nervous, but they were like, ‘Yo man, that was awesome, you should keep rapping’. So every day during the ride to and from school was a chance to turn the back of the bus into my stage. I was in it from them. 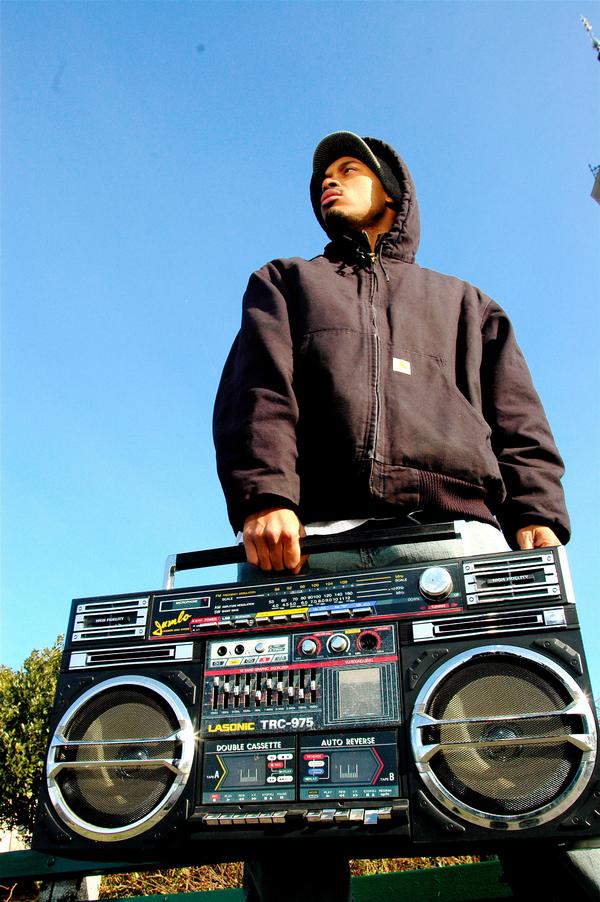 iRJ: Your parents were executives with IBM and you grew up in an affluent residential neighborhood. At the same time early rap chronicled the hard times of the African-American experience. Do you think you had the credibility to talk about those things when they were not a part of your world?

RE: That was the same thing that my dad said. He told me straight up, ‘What are you going to talk about? All these rappers are rapping about how hard their life is and you are living in this great neighborhood in western Connecticut. So, what are you going to talk about’? So, yes I did feel a little bit of a disconnection. There would be certain subject matter in hip-hop, because I wasn’t in Brooklyn or Compton or wherever, that was foreign to me. What kept me going was the underlying fact that – and this is something that my parents showed me and I also experienced – no matter where you go in America, you are still black. So, there were certain things that no matter what level I was – economically or socially – that I was still going to be lumped in with the things that my people dealt with. And looking back I realized that I should be rapping my experience. I feel like our people should hear someone who has had two parents and lived in a nice neighborhood. I mean, the whole goal is making this music and singing these blues not to feel the blues. I think KRS-1 said it best on his 1997 album, “I Got Next”. He said, ‘You can love your neighborhood without loving poverty’. When he said that it was like a light bulb went off. I thought to myself, ‘I can do this’. I can rap and be the glorious example of black affluence, triumph in academia and education, and talk about the good – about black people and the community and not have to feel ashamed about that. I don’t have to be a drug dealer or a thug or have to have a jail record. I can be an educated person and entertain people while standing on those merits by themselves and do my people proud.

iRJ: What is the connection people have with J.Dilla? What are the principles you teach in your class?

RE: The thing that people connect with about Dilla is his musicianship. I don’t mean musicianship in the sense that he plays the right notes at the right time – that’s part of it – but he knew how to mold a sonic texture. And that’s something more subliminal and not as direct. Different producers in hip-hop have different sonic textures that they work with. If you listen to the first Wu-Tang Clan album and compare it to a Dr. Dre record, which is super clean, the first Wu-Tang Clan album sounds dirty. It’s mixed horribly, has muddy baselines and filters, there’s chords flying everywhere that don’t really work traditionally with the structure of the arrangement, but it’s perfect. The sonic texture that RZA made is part of what makes it sound that way. On a Dilla record I think people connect with his sonic texture – the way that he mixed his drums, the way that his bass lines emerged from the kick. He just studied so many techniques. He was able to take what people like Marley Marl, Pete Rock and DJ Premier – even the people that he sampled – listen to and study their records, get inside their techniques, apply it and make it his own. He had an incredible range of dynamics too. He understood how to build a song to a climax. So, I think its stuff like that the people connect with. 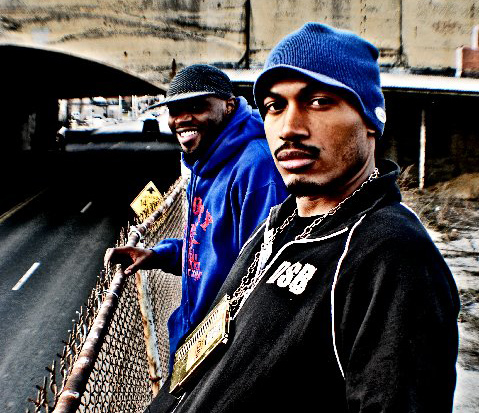 iRJ: Some of the jazz artists are now merging genres like [Robert] Glasper, Roy Hargrove, and others. From a hip-hop standpoint how are jazz musicians embraced. What’s the attitude?

RE: I don’t really think there is too much friction if any at all. I was in New Jersey recently at an event and there was this incredible emcee named John Robinson. He’s been a mainstay in the independent hip-hop scene for about 20 years and rocked with everyone from Talib Kweli, Mos Def and toured the world. He totally understands the lineage of hip-hop. He told me, ‘We are carrying this tradition of what our forefather’s did’. He was rapping about Miles and Coltrane. What Glasper is doing and what Roy Hargrove was doing is not really anything new. Miles did that with Easy Mo Bee on the “Doo Bop” record back in the early 90s. Even going as far back with what Miles was doing with “Bitches Brew”, just blending different funk elements with jazz. I never really run into anyone who had a problem with the musicianship of an artist wanting to step into another world of music. I think all people really want is dope music. I think the innovative thing is that a lot of hip-hop cats that I meet might not be traditionally trained to read sheet music, but when they hear great music they respect it. 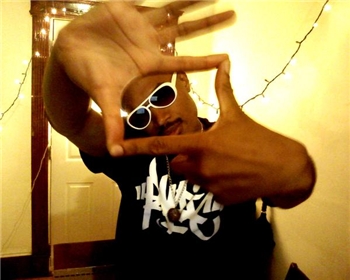 iRJ: As a producer when you look at producing new music what are the characteristics of the artists and how do you define the “it” factor in an artist?

RE: One of the things that I see in regards to the “it factor” is a vulnerability and I mean that in the sense of having a vision and understanding that involving other people in the journey of that vision means it’s not always going to come from what’s in your head. I find that the artists that I know – people like Robert Glasper, Esperanza Spalding – people that I have been in the studio with that I’ve seen the success of their records come from the understanding that they can open up and receive influence from their surroundings and know how to embrace it without feeling a personal disconnect from it. So, I think in terms of advice to artists, I would say be open to that. Everything I’m saying is what I do as well. I am completely my worst critic and I’m always looking for what is the worst thing about this song because I want to fix that. I’ll always look at what’s the best part too, but like Public Enemy’s “Don’t Believe the Hype”; I don’t ever want to believe the hype of my own records to the point where I can see past the blunders and the obvious mistakes.

RE: Right now I have two projects that are finished. One is an EP with Marcus Strickland entitled, “The Lost Salvage”. He did all the beats and I did all the rhymes. Marcus is an incredible producer, but not many people have heard him get down on some samples and chopping up loops. I’m honored to step out with his production. Then my album is coming out called “B.A.N.G”. It is an acronym for “Building a New Generation”. On B.A.N.G I’m doing most of the production and I’m rapping too.