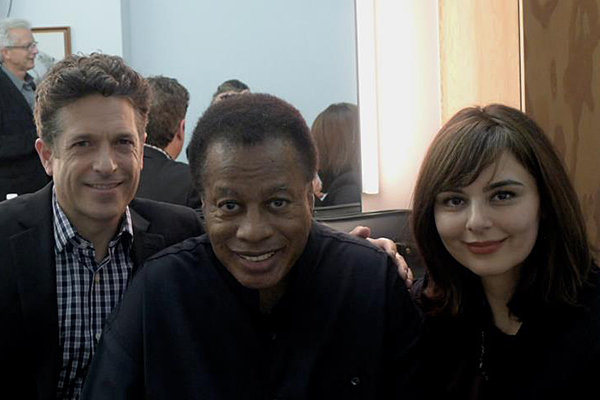 Wayne Shorter: Zero Gravity is an upcoming documentary chronicling the life of one of music’s most dynamic figures. Directed by Dorsay Alavi, the project will be comprised of concert footage, personal interviews, and candid behind-the-scenes moments. The resulting endeavor will provide a composite sketch of Wayne Shorter – as a man and a musician.

The musings of Wayne Shorter are delivered with an unfailing optimism and a dash of wit. Embedded in his words is an underlying provocation:

When Shorter speaks these words, he does so with a smile on his face. The sentence, simple in form, represents the greater theoretical framework under which he operates. With every sentence, he moves from the abstract to the finite, always deconstructing accepted norms in and out of his profession. That is “zero gravity.” It is the challenge to not just think on an entirely different plane, but to disregard the plane itself. Shorter has made a career of eschewing the limitations placed upon people in his position. It is because of this we find him to be such a compelling figure, one whose story deserves to be told.

iRock Jazz recently sat down to talk with Wayne Shorter about the interworkings of the man behind one of the most anticipated music documentaries in recent history.

iRJ: Tell me in your words what “zero gravity” means and how you came up with that philosophical term and how it relates to your music.

WS: It’s just an effort to not be tied to anything – to not be handcuffed to something that is very static in your life and to not put walls of boundaries around your life. It’s about not being attached to what you’ve been hijacked from. Everyone’s been hijacked from the cradle, but not completely. If it was complete, we wouldn’t get some golden words of wisdom – words from say, grandparents. A lot of people say, ‘Well grandparents did the best they could’. No. They did a lot better than that. They found how to get hacksaws and take off their handcuffs. In a sense, I think very broadly that everybody was everybody else’s grandfather or grandmother at some point, eternally speaking. I have to speak in these broad terms because the impossible is the thing they’re trying to hijack us from. They exist in every one of us – the other side of us that doesn’t want that negative part. 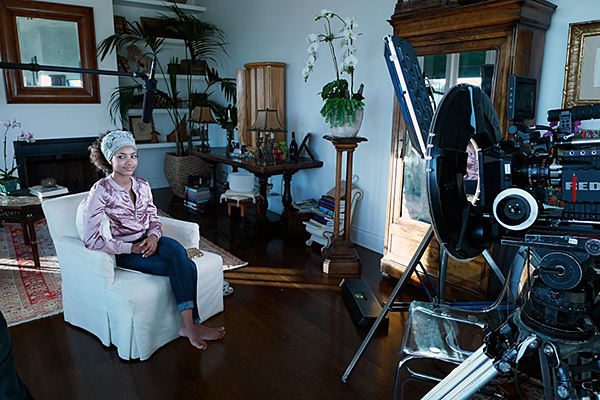 iRJ: You have been talking about making “zero gravity” a movement. What goes into that?

WS: Zero gravity is actually an inspirational phrase. I don’t want that to become in itself a handcuff or be characterized as ‘Here comes another group with this cult thing’. It’s just freedom of thought and freedom of actually investigating what common sense really means. And common sense is still unexplored territory – it’s virgin territory. It’s being able to discern and detach from all kinds of epidemics, generalities. I liked this teacher that I had in social studies. He used to say, ‘Beware of glittering generalities and guttural utterances in life’. [laughs] When we play music or do something called zero gravity on one record and then do it on another, each one is different. If there’s a such thing as a movement, the movement is keeping it from being a movement. [laughs] Zero gravity is freedom to transcend all dogma and confinement. Freedom, if not understood, can be one of the greatest shackles to mankind. Freedom is a living thing. I think some of the great composers knew that. 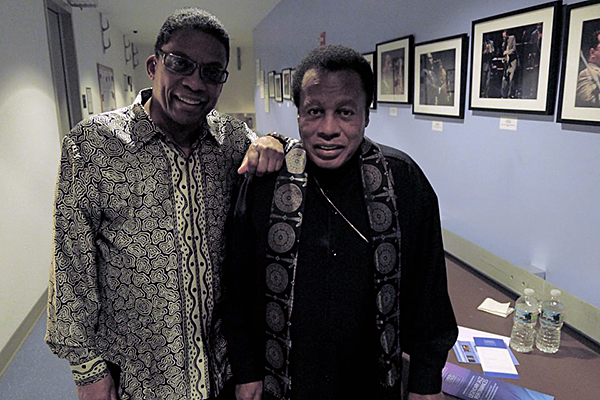 Wayne and Herbie about to go on stage at the DLF Historic night of Jazz at Lincoln Center.

iRJ: How much of your faith in Buddhism reflects your philosophy as a composer and as a musician?

WS: I would say it’s always a beginning. With the teachings of Buddhism, it’s always a beginning. It’s beyond measure. So when I’m doing music, it’s in an immeasurable process of how much it’s inseparable and immeasurable. Because it’s not like Buddhism is something outside that I’m bringing in. It’s something inside that I’m letting out. That’s why we don’t have idols or think about great supernatural power that exists outside of ourselves…that do things to us like, ‘The devil made me do it’ or ‘I can’t do this by myself’. Since I’ve been this way a long time, I have always been a candidate for discovery and I’m still trying to discover this mystical process which is called Buddhism.

Zero gravity is freedom to transcend all dogma and confinement. Freedom, if not understood, can be one of the greatest shackles to mankind. Freedom is a living thing. I think some of the great composers knew that.

iRJ: As the subject matter of a documentary, what is it like to see all of these parts of your life coming together into small segments that begin to shape your legacy as a musician?

WS: It’s almost like when you go on stage and you’re going to play. As this is ensuing, it’s about putting away everything that you think of as a part of your credentials for being who you are. Forget about putting your best foot forward or putting on your Sunday suit when you’re going to make this documentary about yourself. It’s not going solely the other way either, like being raw and unabashedly candidate and shocking this and all that! [laughs] It’s a challenge that’s equal to every challenge you have as a human being. Like they say, you hear a lot of times ‘Why don’t you just be yourself.’? This is what that is like. Not rehearsing to be yourself, but being yourself. It’s like letting go of a lot of things that you know are not a portrayal of what I call vision, without stepping on people who seem to have no vision and just follow. We need more leaders at this point in life. This is how I’m feeling as we go through this documentary. 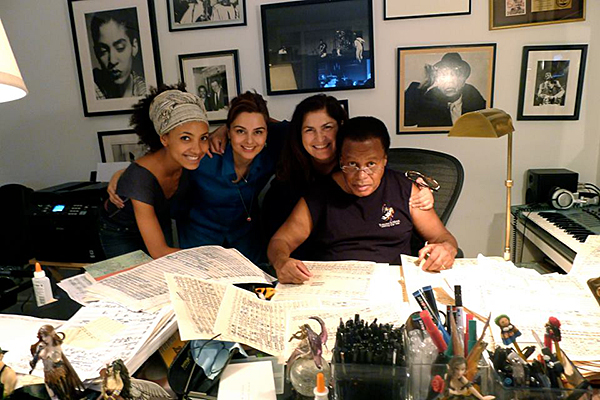 iRJ: As this documentary is being completed and you have to live through your highs and lows, what are you most proud of musically?

WS: What I’m most proud of musically is the fact that I had parents that said, ‘Leave him along. He’s practicing’. That’s what I’m most proud of. Relatives would come over…‘Can you send one of the kids to get me a pack of Chesterfield’s’? ‘No. Leave him alone, He’s practicing’. That is huge. Grammys? No. That is the ultimate Grammy right there. I can see that now. I’m not trying to be cute either. This is hindsight.

iRJ: At the end of the day when you look at your life what do you want people to know about you most?

WS: Like Miles Davis said ‘Five hundred years from now I don’t want anybody to think that I was Norwegian’ [laughs] No, no. I would like people to just think and feel that something was awakened in their minds that enabled them to jump into the unknown without fear. To have the courage to say what they feel. 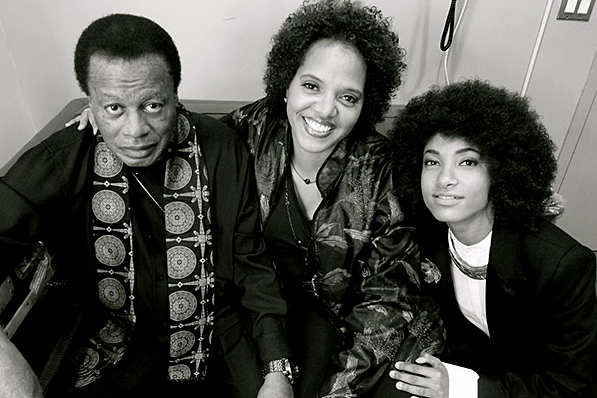 What was to be a brief conversation, turned into a discourse on life. You don’t get that from many musicians. But then again, Wayne Shorter is not just any musician. He is a man with a complete vision. The music simply falls within that. Presented here today is merely a glimpse into the mind of someone who is constantly reflecting upon those things that we often overlook. And that is why his narrative is so important. As a fan of music you needn’t be sold on this project. The value is obvious. However, it’s much more than that. This documentary is for anyone hoping to learn more about not only themselves, but the surrounding world. Wayne Shorter is a master teacher in more ways than one.  For more information on the “Zero Gravity” documentary or if you would like to pledge a contribution to the project, please go to the website www.pledgemusic.com/wayneshorter.

Robert Glasper: Jazz with Hip Hop is Music of the Now