YOU ARE HERE:Home » Reviews » Jazz for Obama: Live at Symphony Space in New York
Reviews

Jazz for Obama: Live at Symphony Space in New York 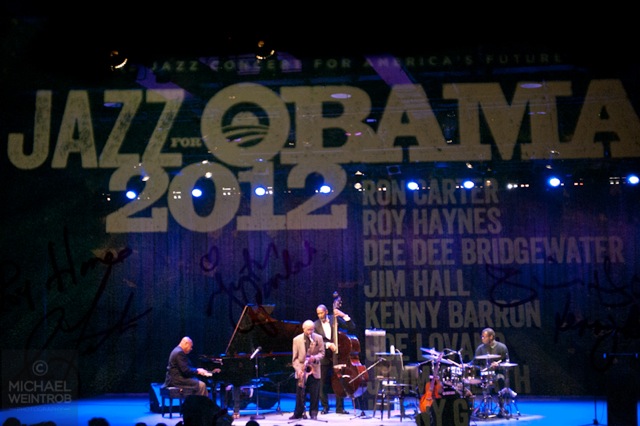 If one keeps good company and/or is mentioned in high regard by others whom are held in such a regard, then that speaks volumes about the qualities and virtues of that person. By simply observing the line-up of musicians who performed at the Jazz for Obama benefit concert in New York City, it’s very clear that our president is highly favored. The fundraising event organized for the campaign for the incumbent, Jazz for Obama was an evening of furious creativity, admiration and celebration. Hosted by Grammy Award-winning singer Dee Dee Bridgewater and pianist Aaron Goldberg (whom organized the event), Jazz for Obama was a back and forth of music legends and legends in the making. Throughout the 150 minutes of the show, there were various amalgamations of the 26 musician lineup. 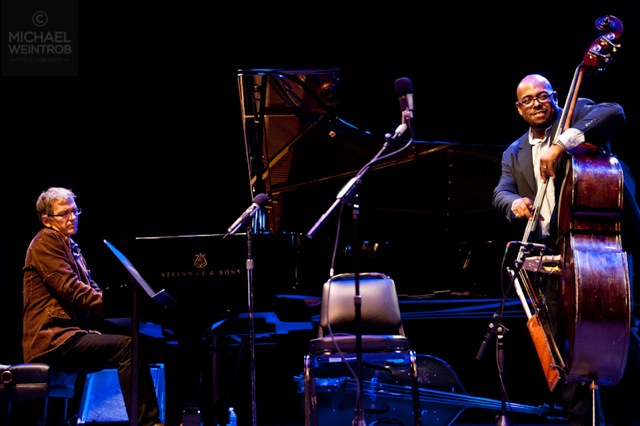 The concert started off on a lovely note (pun intended) with quartet of Ron Carter, Kenny Barron, Jimmy Heath and Gregory Hutchinson. Heath’s sensuous tenor sax soloing on “Autumn in New York” inspired visions of walking hand and hand with a beautiful someone in Central Park as multi-pigmented leaves gently fall to the ground. The quartet of Christian McBride, Ralph Peterson, Ravi Coltrane and Geri Allen on John Coltrane’s “Wise One” was a wildly spiritual exercise, made so by Allen’s story runs on the ivories. Arturo O’Farrill brought out his sons Zack (drums) and Adam (trumpet) along with singer Claudia Acuna to give Van Morrison’s “Moondance” a thick injection of Latin soul. And while each performance was unforgettable, the standout performance of the night was Bridgewater and McBride’s duet of the Isley’s “It’s Your Thing.” Bridgwater’s ultra-flirtatious vocals and gyrations incited McBride to treat his bass the way he’d treat his woman during a flirty-funk romp.

What stood out more than anything was the awe-inspiring virtuosity of the older veterans. It was remarkable to watch as these musicians gingerly make their way onto the stage, some with help, and play with the same fervor and virtuosity they did in their primes. Jim Hall, 81, appeared with a cane and needed to applied baby powder to his hands before plugging in his guitar, but once he and Carter played the first bars of “All the Things You Are,” it was clear that the effect that time had on his legs worked conversely on his hands as he seamlessly shuffled that six string. During his duet with saxophonist Joe Lovano, the legendary McCoy Tyner, 73, pounded that Steinway & Sons grand piano like a blacksmith pounding a horseshoe on an anvil. And 87 years young drummer Roy Haynes stole the show in a finale that saw him tap dancing, bare-hand smack his hi-hat and played a five minute solo full of some many funky break beats that seemed like he was using his drum sticks to swat a mosquito!

President Obama may endure a tight race for re-election, but with such music legends in his corner, the gap between him and his opponent may have widened.