YOU ARE HERE:Home » Reviews » Cassandra Wilson – LIVE at the Old Town School of Folk Music
Reviews 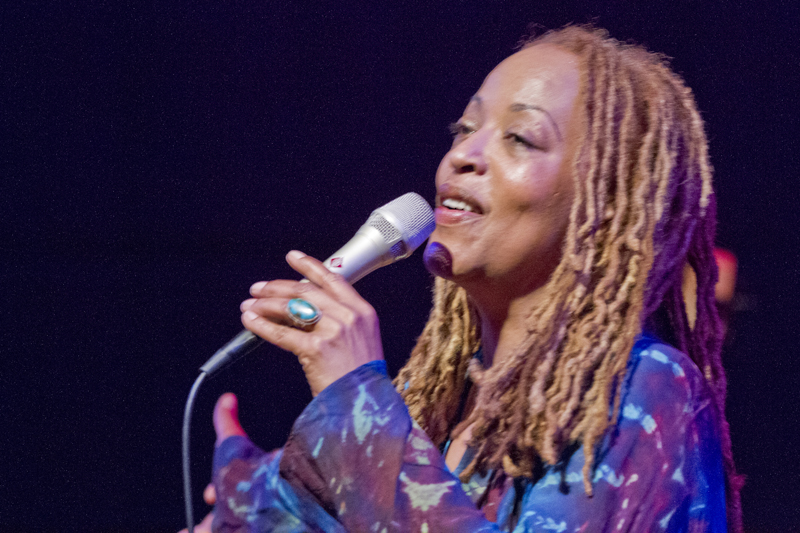 When it comes to her vocalism, there are few who can match the distinctive sound of Cassandra Wilson. She is a giant of her era; a truly gifted talent, who looks to express herself through multiple genres, styles and sounds. Recently, at the Old Town School of Folk Music, Wilson introduced her audience to her new muse. She has just recently released Another Country, a unique compilation that features guitarist Fabrizio Sotti. Time has not dampened her enthusiasm, nor has it hindered her trademark husky, timbre and mahogany tone. She is still as vibrant a performer as she has ever been.

Cassandra Wilson was moved by the energy of the crowd and the warmth of her surroundings. The Old Town School of Folk Music is a cozy environment that brings the audience into the performance. With its high ceilings and deceptively wide balcony, this venue is larger than one might think. Its stage is small, but the sound seemed to reverberate throughout the room. With largely unencumbered views, there are conceivably no bad seats in the house. It makes for a great venue to experience music.

An emotive performer, the songstress dazzled the audience by covering some of her previous songs and others from her new album. Her choices were warmly received, but the audience had a stronger affinity for her more recognizable tunes. At one point, a couple in the audience whispered, “I hope she does at least one standard.” Unbeknownst to this couple was “Skylark”, which appears on her earlier album. New Moon Daughter is a rendition of Hoagy Carmichael’s famous Jazz standard. Beautifully dark and free ranging, Wilson sang this rendition effortlessly, leaving the audience in a buttery hue. The toe-tapping soul of “No More Blues” brought the audience to its feet, begging for more. This was Cassandra Wilson at her best; spiritually connected, artistically entrenched.

Never one to under deliver, her accompanying band is a mixture of old and new, resulting in an incredible performance. Chicago’s own Lonnie Plaxico helped to anchor the rhythm section on bass, with the incredible Mino Cinélu manning the percussion. Cinélu is particularly noteworthy since his genius did not include a snare drum or high-hat elected to use a small conga, a floor tom and a bass drum as his primary instruments of choice. He was able to conjure robust rhythms which drove the performance. Pianist John Coward demonstrated melodic restraint and control during his solos, while longtime group guitarist Brandon Ross moved flowingly, creating subtleties and rich textures in his playing. He was not to be outdone by Gregoire Maret, who showed us how expressive the harmonica can be. The camaraderie between the artists was apparent from the beginning. This was the first night of many performances in several states. Collectively, they will continue to solidify their efforts and redefine their sound. This was an enjoyable performance.

Jazz for Obama: Live at Symphony Space in New York