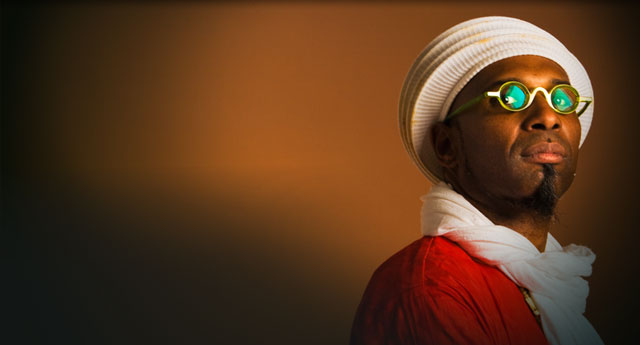 When jazz musicians perform and record “tributes” to the music of another renowned artist, the result is usually prosaic. The player paying “homage” usually performs to the standards the honoree is famous for delivering.  However, when Afro-Cuban pianist Omar Sosa received a commission to take the music of the Miles Davis classic, Kind of Blue and re-arrange it, he deliberately chose the easy route. He  decided to deconstruct the original charts, and create an entirely new canvas of sound, rhythm and color.  The music that resulted was recorded in the groundbreaking Eggun, which means ‘ancestors” in Yoruba. Even though Sosa did not recreate the classic recording note-for-note, the music and themes of the music itself were interwoven throughout Sosa’s work.

Sosa brought a multi-kulti ensemble to play at the Detroit Institute of Arts (DIA), which included players from Germany, Cuba, and Mozambique. In addition, they performed almost every cut on Eggun.  They also played the tunes in order, starting with the hauntingly powerful “Alejet,” which was a mash-up of “All Blues” and a Yoruba invocation to the orisha. (deities). The bassist, Childo Thomas, did the singing, which paid homage to Elegua, Obatala, and other spirits of the Yoruba pantheon. Trumpeter Joo Kraus added enough coloring to evoke Davis from “Blue In Green.” As a matter of fact, Kraus channeled Davis so much that it was easy to imagine what he might be playing if he were creating an Afro-Cuban motif. It was evident, however, the music was entirely Sosa’s. This is especially true when he performed in a more traditional vein on the crowd-pleasing “Rumba Connection.” Sosa even got the audience involved. He and his crew were clapping out clave, while he was dancing at the keyboard.

The next pieces were much closer to Davis’s original music. “Alternativo Sketches” was a direct evocation of “Flamenco Sketches.” You could hear the references throughout the performance. Another standout piece was “All So Freddie.”  Even though it evoked both “So-What,” and “Freddie Freeloader,” the Afro-inflected bass and keyboard work suggested that this was how “Freddie” would have sounded if he were hanging out in Lagos instead of New York.  Sosa’s brooding melodicism on this music did bring to mind the work of Bill Evans on the original.

Even though Sosa’s music placed an emphasis on the interplay between the keyboard voicings, the rhythm section and Kraus’ trumpet work, it would be amiss not to mention the work done by the reed section. Tenorman Peter Apfelbaum, is an accomplished veteran with roots in the avant-garde scene, but with the versatility and  grounding in world music that cross between genres.  The sleeper that night was Sosa’s fellow countryman Leandro Saint-Hill who is an accomplished utility man on alto sax and clarinet.

After years of drawing praise and acclaim from fellow musicians and critics, Omar Sosa was recognized as one of the most talented players to land on the scene from Cuba. His equally thorough grounding in both the Afro-Cuban and modern jazz, is distinguished by his unique ability to transcend both genres while creating new music based on them. It is too early to conclude that “Eggun” will be Sosa’s magnum opus, and is now his stand-out work.