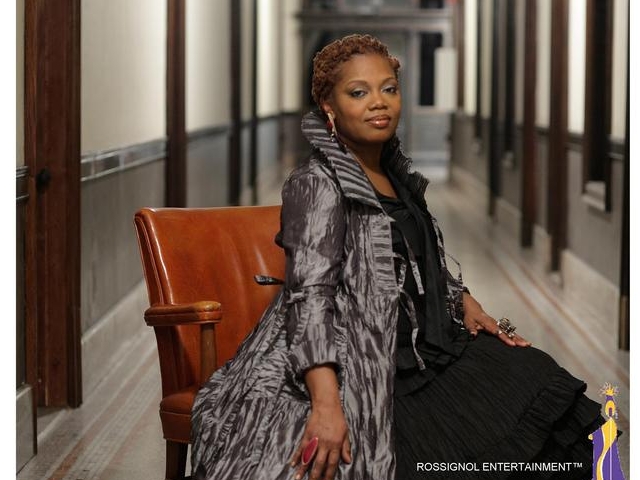 “When a little Italian woman who can’t speak English comes up to me and says, “Bellissima!” with tears in her eyes, that is priceless.” – Dee Alexander

An incredible talent, Chicago native Dee Alexander is to be celebrated for her enormous natural abilities. As a versatile and fearless artist, she is not afraid to wade deeply into the unfamiliar or the travel bravely down lesser creative paths. Her popularity is growing, as she is now the recipient of the 3Arts Awards for artistic achievement. In her interview with iRock Jazz, we discuss her humble beginnings and how music shaped her personal perspectives.

iRJ: What musical category would you put yourself into?

DA:I’m an Aquarian, so I’m kind of like air, which cannot be contained! I don’t like to be pigeon-holed. I actually started off being exposed to R&B, Soul and Gospel. When WVON would go off, the only other station left to list to was WLS. So I was exposed to all kinds of music. Growing up in Chicago, my mother exposed me to Jazz at a very young age. It’s just a lot of music I was exposed to as a child that is still coming out of me today. I don’t know if you were aware of it, but in Europe we did a tribute to Jimi Hendrix. We did it at the Umbria Jazz Festival and they went nuts! They were lighting cigarette lighters! I have this group called the “Evolution Ensemble”, which is basically a string group with percussion and vocals. When I told them to do the tribute to Jimi Hendrix, they thought I was nuts! I’m always thinking forward and ‘outside of the box’ so to speak. There is a method to my madness. As a result, on Dec. 7, we are doing a tribute to Jimi Hendrix and James Brown at the South Shore Cultural Center. And I found out that my concert will be aired on live public radio on New Year’s Eve. We will be simulating New Year’s Eve. This will expose us to a broader audience. You can’t have a party without a little bit of James Brown! Of course, I love doing all types of music.

iRJ: Light Henry Huff encouraged you take risks across boundaries. Why was his influence and encouragement so significant to your development?

DA: There are people that don’t know about him. Every opportunity I get, I’m sure to pay homage to him. Had it not been for the time and experience I had with him, there is no telling where I would be in my life personally or musically. He was a multi-instrumentalist born and raised here in Chicago. He was also a part of The Association for the Advancement of Creative Musicians (AACM). I was doing a performance at Northeastern University, and that’s where I originally met him. He came up to me and asked me to be a part of his group. Needless to say, it changed my life. The group was Yosef Ben Israel and Avreeyal Ra. We called ourselves “Breath”. At first I didn’t understand the name, but eventually it made sense. At the time, I was really the third instrumentalist, but it was really improvisation. And he always encouraged me to think outside of the box, never be afraid to take chances and to be totally uninhibited. And that is the stance I take today, and I thank him! Sometimes when I stop to think of stuff I’ve done, I know I might never have done half of them! This is a work in progress!

iRJ: Versatility is easily your greatest strength. What would you say is your best attribute as an artist?

DA: I would say having an open mind is my best attribute. I love the ability to be creative and not be afraid to walk the plank and dive into the ocean, sink or swim. You won’t know until you jump in there! I’m not afraid to take a chance. 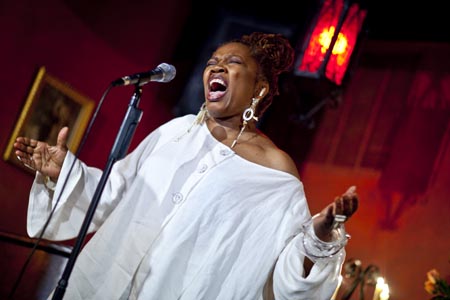 iRJ: When I think of vocal improvisation, artists like Dee Dee Bridgewater come to mind. I just did an interview with Cassandra Wilson and she agreed her voice is an instrument. Talk to me about your voice as an instrument. Do you feel the same way?

DA: Yes, I definitely agree with Cassandra. After all, the voice was the first instrument. Listening is not a lost art. I love listening to the sounds of the city. I love listening to the birds in the morning. It’s just amazing. The things I listen to, many people take for granted. Things like a baby crying or how the bus passes by. I like to emulate different things into what I do vocally to keep things interesting and fresh. I’ve been influenced by great vocalists, but my greatest ones have been musicians. People like Dizzy Gillespie, John Coltrane and Light Henry Huff, just to name a few. I also like listening to percussionists like Ramon “Mongo” Santamaria. I’m collaborating with Neil Clarke, who is Randy Weston’s percussionist. We’re doing a concert called “Primal Rhythm–Voice and Drums”. The voice was the first instrument and the drum is the heartbeat. So, I definitely consider my voice and body as instruments.

DA: This is such a blessing! I am really humbled by it. The most important part about this award, aside from the cash incentive, is the recognition that comes with it. To be recognized for something you’ve been doing for a long time and staying on the path is very rewarding. You have to be nominated for this award. I was nominated anonymously. I have applied three times, so the third time was a charm! I received a phone call from Esther Grimm. I wasn’t feeling well. I had spoken to her in previous years, and I was very familiar with her. She called me to deliver the news. I was screaming! My mom was screaming! It was the best news I could have received at that time. I was just elated! The other nine recipients are outstanding and we’re already talking about collaborating in the future amongst ourselves. Kudos to the 3Arts organization for recognizing artists for what we do. Everyone wants to know what I will do with the money. I have this idea with my mother in mind. Growing up in the inner city, she always had great music playing. I want to finish my CD project called Songs That My Mother Loved. I have been asking her what some of her favorite songs are and I’ve been jotting them down. Miguel de la Cerna is my musical director and we’ve already started arranging and rearranging these songs. I think she will be thrilled and I hope everyone else will be as well.

iRJ: I’m sure they will! Congratulations once again!

DA: It is truly a blessing. It’s an honor and I don’t take anything for granted. I am so appreciative of all the support I’ve received here and abroad as well. In fact, I will be performing at the Newport Jazz Festival next year! The terms are all set and ready to go! I’m very excited.

iRJ: Given all that you’ve seen and everything that you’re about to do, what has music taught you?

DA: Music has taught me humility, grace, patience, love and that it can take you all over the world and back. I am very selective of the music that I do. I’m a storyteller, and I want to tell stories about life, love, truth, reality and just about being a human being with all our faults. I don’t know what I would be doing if I wasn’t doing music. I would probably be a nurse. I believe in helping and uplifting people. When a little Italian woman who can’t speak English comes up to me and says ‘bellissima’ with tears in her eyes, that is priceless. When you touch another human being with music as the language, that is the greatest joy of all about doing this.