YOU ARE HERE:Home » Reviews » Radio Music Society – LIVE at the City Winery with Esperanza Spalding
Reviews 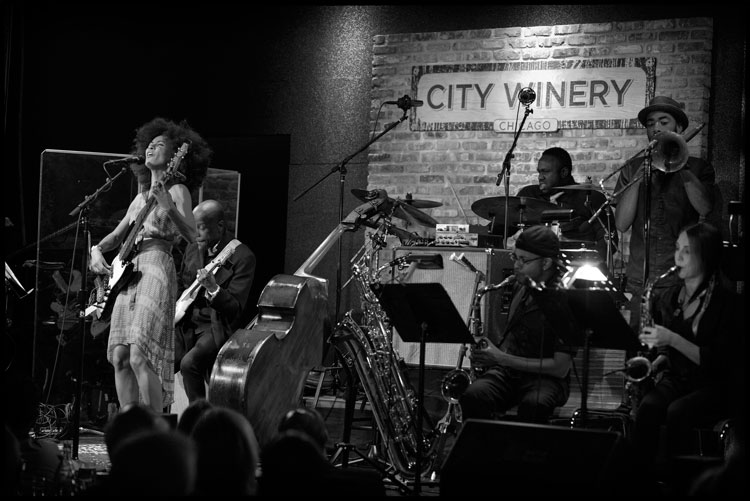 On this breezy fall evening, the crowd sits patiently waiting for her arrival. The wine is being poured as the servers dance effortlessly between the chairs and tables. The new darling of the jazz world, Esperanza Spalding is about to grace the stage with her refreshing and inspirational brand of music.

The City Winery, located at 1200 W. Randolph St., is a relatively new restaurant in the West Loop. It’s the brainchild of Michael Dorf, a successful entrepreneur who wanted to create a space that combined his passion for wine and music. The City Winery is large and spacious, complete with huge wine casks, which they use to ferment and bottle their own custom blends. The wine is made locally from grapes imported from around the U.S. and South America. The large, main concert space has several tables and chairs and of course, a large stage, which makes it an energetic scene with very good natural acoustics. The room walls are exposed brick, with hardwood floors. There is a noticeable din, making it a very lively environment. The City Winery features an extensive wine and food menu. Dinner is served in the main concert space. However, they offer separate dinner spaces for non-concert goers. In addition, they offer sommelier classes, and weekly live entertainment. Ironically, Esperanza Spalding has only played in the Chicago venue. She has yet to do a show in the New York location. To learn more about this fantastic venue, please visit their website.

Esperanza Spalding combined commentary with musical verse during her performance. She is a dynamic singer, with a strong voice along the lines of a young Dinah Washington. Her voice is her secondary instrument that she wields with the right mix of control and dramatics. She seemingly does it all! Esperanza switches skillfully between the electric and string bass with ease. Plucking her notes deliberately, she creates clear and forceful notes, which accentuate the emotion that she is trying to convey. She was accompanied by a roaring 10- piece ensemble, featuring two back-up vocalists that created, a modern big band sound. This was not Ellington’s triumphant swing, but it had similar traits with new and creative twists. The effect was equally as demanding. 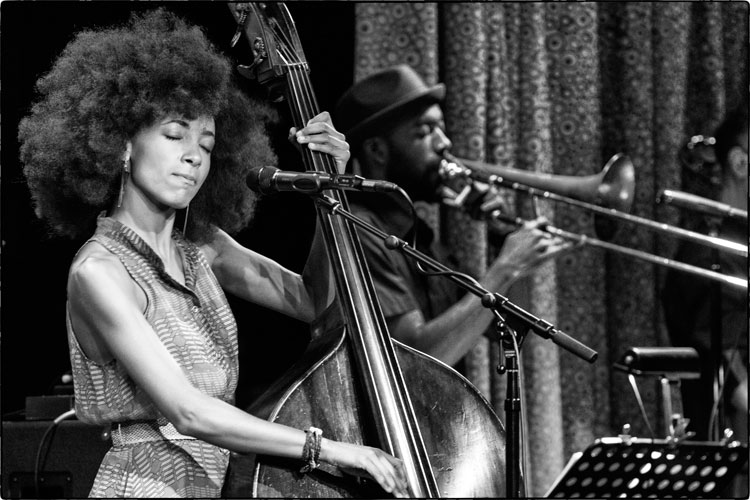 Unafraid to cover the likes of Michael Jackson, Spalding’s creative template was inclusive, yet slightly disorienting. You had to  listen carefully to gather the artful sequences and time changes during certain songs. She is clearly moved and motivated by the world around her as evidenced by her messages and the titles of her songs. For example, she sang freely about issues that seem to plague us as a society, like racism and poverty. Her song “Black Gold” was a manifesto for self- worth, and self- confidence. Back-up singer Chris Turner provided stirring and emotive solos that accentuated the depth of the message and the weight of the song. Jeffery Johnson demonstrated his mastery on guitar as he mesmerized the crowd during his solos. Other songs like “Land of the Free” and “Cinnamon Tree” examined topics like love among friends and criminal injustice.

Proceeds from the merchandise sold during the Radio Music Society North America Tour will benefit The Innocence Project. This is a non-profit legal clinic dedicated to exonerating wrongfully convicted people through DNA testing. They are trying to reform the criminal justice system to prevent further injustices from occurring. Esperanza Spalding is truly trying to make a difference in the world we live in, as she challenges us to think harder about ourselves.