YOU ARE HERE:Home » Reviews » Joshua Redman and Brad Mehldau
Reviews 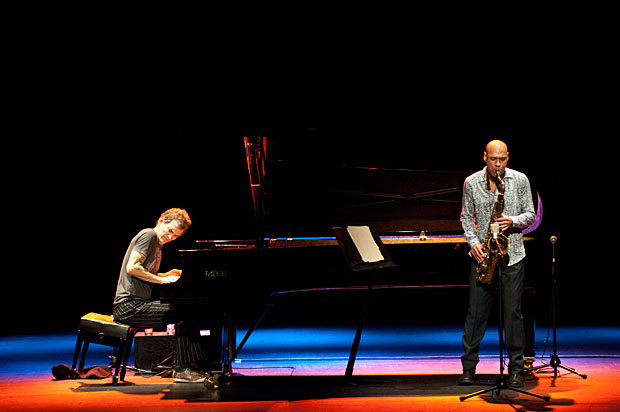 When Joshua Redman heard Brad Mehldau play piano in the 1990’s, he hired him practically on the spot. Since then, the two have made names for themselves as fixtures on the jazz scene, and have once again come together for a tour.

Mehldau is not as much of a straight-ahead player as Redman, but this doesn’t mean he is unable to play in that style. At their concert in St. Louis at Jazz at the Bistro, the duo played standards such as “I Remember You”, “My Old Flame”, and closed their set with the Charlie Parker tune, “Anthropology.”

They also played a lot of originals such as “Sanctus” and “Highway Rider.” On many tunes, Redman would play for three or four minutes unaccompanied—soaring through the changes and playing endless ideas. Sporting soprano and tenor saxes, he was able to show off his spectacular range.

In a duo, it becomes the responsibility of both musicians to keep time—and they did on the up-tempo Bird tunes and the slow ballads. Mehldau proved that he knew the originals should not result in a musician forgetting about the standard repertoire.

When trading fours, for example, the musician lacks the support of a full band to help them keep their place. The most interesting parts of the performance were where the two would create counterpoint through improvisation.

Redman had a very interesting and unlikely path for a jazz musician. After growing up in California, the son of saxophonist Dewey Redman, he graduated from Harvard with a degree in social studies.

“I wanted a sense of stability, and playing jazz wasn’t my first choice economically speaking,” Redman said in the Crimson. After being accepted into Yale Law school he deferred admission, entreated into the Thelonious Monk international Jazz Competition—and won. Whatever practice time he missed while in school, he certainly has caught up by now.

During the concert, Redman would hold notes and make it sound like a siren. When he played by himself, he gave a clinic on how to practice and create new sounds. It was pretty interesting to watch a master at work like that.

Keep your eyes and ears open as these two travel to Canada, New Jersey, and the Berklee School of Music.