YOU ARE HERE:Home » Interviews » T.S. Monk: Jazz is Driven by the Root Philosophy to the Music
Interviews

T.S. Monk: Jazz is Driven by the Root Philosophy to the Music 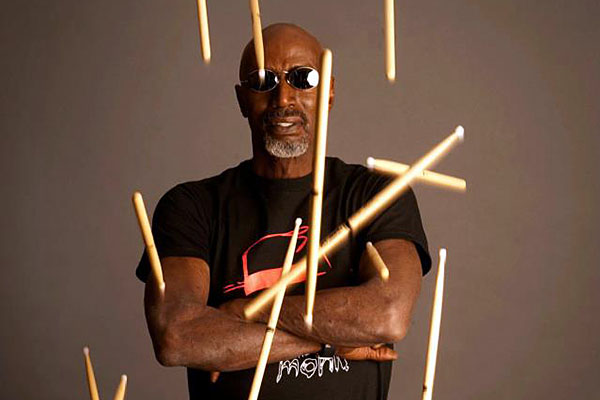 Of those that studied under Thelonious Monk – a list that includes Miles Davis, John Coltrane, and Bud Powell amongst many others – T.S. Monk may be his most successful pupil. Now before you cry foul, understand this: Education is not simply the accruement of knowledge, but its application. If you’ve ever talked with T.S., even for a moment, you already know where this is going.

You see, the Monk household was a perpetual master class by sheer proximity. As the son of Thelonious, young T.S. was schooled to the “philosophy” at an early age. What we’re talking about is the gospel according to Monk. It is something Miles accepted, Coltrane accepted, and seemingly every other great name in the canon of jazz has accepted. But don’t get too caught up in those names, because anyone can practice the “philosophy.” It is a mind state, not a musical manifesto.

This is what led us into today’s conversation. The successes of T.S. Monk have transcended the making of music and expanded into engagements well beyond the confines of 88 keys. In recognizing his own individuality, we can still see the reflections of the man he called “daddy.”

iRock Jazz spoke with T.S. Monk about his own work and how it has been shaped by his father’s enduring influence.

On becoming a drummer

TSM: During a recording session, I remember looking at Max with his drums and this beautiful brass timpani and it just looked so cool and over the top. He gave me a pair of drum sticks. It wasn’t until ten years later that my father sent me to Max’s house for lessons. Taking lessons with Max Roach – it’s not like he’s pulling out a book and saying, ‘This is lesson one’. It ain’t like that. It’s old school. What it’s really about is the hang and the conversation. Cats like that will point you in the right direction. You want to go over to his house and play drums all day, while he’s sitting in a room reading a book. And maybe he’ll come in and play a little something for you or give you something to think about and then you go on. On one particular day, I went over to Max’s and I walked in the door and there was this beautiful, green pearl drum kit, brand new. What was interesting about it was that it was built on this carriage on wheels. And naturally I said, ‘Wow Max, what is that’? And he said, ‘This is the new thing. It’s an electronic drum kit that some cats in Italy just sent it to me. Check it out’. So I played it all day and when I went to the door to split, Max said, ‘Look man, you know I’m too old for these drums. Why don’t you take them home with you.’ He gave me the first electronic drum kit back in 1966. So here I am in 2013 playing a $10,000 state-of-the-art electronic drum kit and feel very comfortable doing it because Max Roach told me personally that this is where the instrument is going. 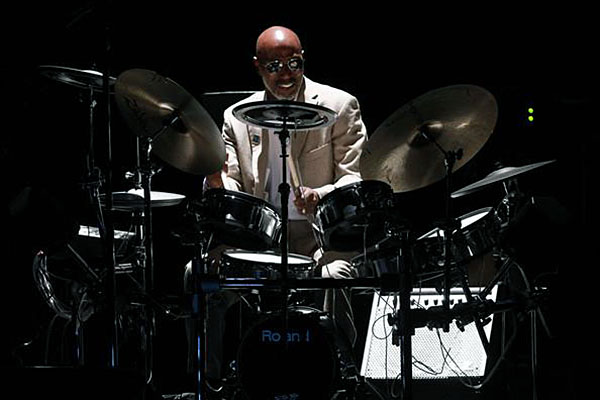 On the “philosophy” of jazz

TSM: What a lot of people don’t understand is that jazz is not driven by technique. Jazz is driven by philosophy and it has always been driven by philosophy. There’s a root philosophy to the music that will pass down from generation to generation and one of those philosophies is that you can’t stay in the same place. You must move forward. You must stay on or as close to the cutting edge as you possibly can. The objective is to explore the unknown. Fear of the unknown drives so much negativity in the human psyche. It is the objective – going back to Buddy Bolden and Louis Armstrong – to play something that you never played before. That’s why Thelonious was such a genius. He could play the same goddamn song fifteen times and each time he played it, he would make it interesting. So when people said, ‘What’s Miles doing? Why isn’t he playing ‘Boplicity,’ ‘Birth of Cool?’ Why isn’t he playing ‘So What’?,’ they missed the whole point. They were so far behind Miles, which is why he didn’t pay no attention to them and kept on doing what he was doing. That’s the environment that I grew up in. Every jazz musician who really gets it done knows about the philosophy. Everybody’s got all kind of different techniques and different levels of technique. That has nothing to do with what you play. That has nothing to do with your ability to tell your story.

“I say, play your own way. Don’t play what the public wants – you play what you want and let the public pick up on what you doing – even if it does take them fifteen, twenty years.” – Thelonious Monk

TSM: The majority of the younger players, including a lot of us older musicians, got the technique, but they don’t have the philosophy. So what you end up with is a whole generation of players, coming out in the 80s, trying to play like the guys in the 50s. If the guys from the 50s were alive, two things would have happened. One…they would have said, ‘Why are you bogged down in our old shit’? Two…they’d be punching them in the mouth for playing their stuff. All this transcribing Bird and transcribing Coltrane…you can’t even write down what Coltrane played. When you look at jazz education, which you know I’m so intimately involved in, the problem was that they were teaching technique with no philosophy. The young players were not told in the academic environment that you’re not supposed to sound like the guy next to you. So what happened is that we’ve flooded it with players that no one can distinguish. And that has hurt the music. That one issue has lost more jazz listeners than any other issue. I don’t care about rock and roll, I don’t care about economics. I don’t care about trends. I’m hearing a lot of young kids that are actually getting it and talking about their own sound and reaching for their own sound. That’s when the music will get healthy again. 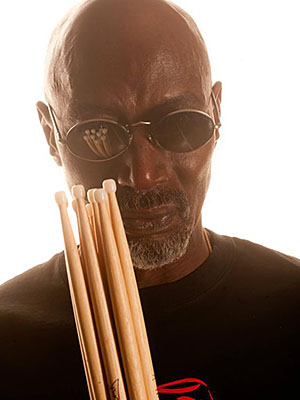 On the history of jazz

TSM: This compressed time that we have here in America sometimes doesn’t serve us terribly. Jazz popped up on the radar maybe a little bit over 100 years ago. Classical music has had 500 to 600 years to develop and a lot of the various ethnic music from around the world have had thousands of years to develop. We in America, particularly the academic heads, decided that there was a thing called traditional jazz. But in the world of art, you don’t have no tradition after 100 years. We’re still adding instruments. A symphonic orchestra is set. They had a couple hundred years to figure out what are the symphonic instruments. Most of the instruments in jazz are not in the symphonic orchestra. So we’re still developing things. We still have no set number of drums. We have no set tuning. We have no particular way to hold the sticks. We haven’t made any decisions on anything. It will take another 200 years to create a tradition. Jazz is a work in progress. And what people lament over from the 1950s and 40s and 30s, I simply call it the first golden era of jazz, just as classical music has had several golden eras over the past few centuries. 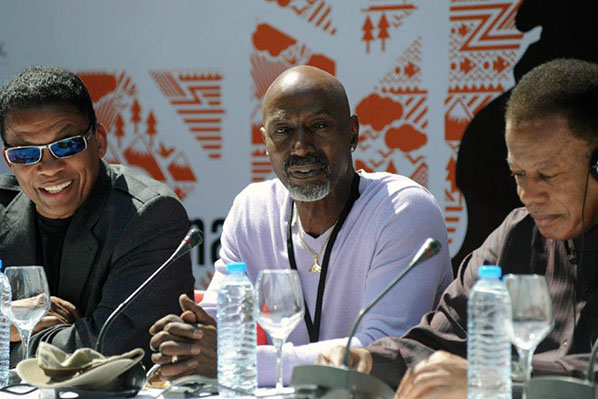 On the mission of the Monk Institute

TSM: The Monk Institute is not about Thelonious Monk. The Monk Institute is about jazz. Thelonious was about jazz. He wasn’t about himself. [That’s] Why he personally mentored Miles and personally mentored Coltrane and personally mentored Bud Powell. Those are the three most important individuals of the last half century in jazz. Thelonious’ footprint on the African-American music of the last half of the 20th century is absolutely profound. But there have been contributions from all over the place. The Monk Institute is about championing all the music. You can get some Monk here, but you can get Duke Ellington here too. You can get [Billy] Strayhorn here. You can get Betty Carter here. You can get Wayne Shorter here. It’s about jazz. Jazz is a big word that covers a lot of music. It covers everything from Ornette [Coleman] to Duke to Louis Armstrong to Kenny G. All of it and everything in between is jazz. We don’t have any rules or regulations about, ‘It can be only this kind way’ or ‘It’s gotta be traditional, straight ahead’. No. No. No. When you look around the jazz horizon, you see Monk Institute graduates and people that have gone through our program in every category of jazz – from actually teaching to one of our winners being on “American Idol”. The spectrum is gigantic and we’re going to keep it that way. That’s the only way the music moves forward. The critics are not supposed to know what you’re doing. They’re confused. They’ve always been confused by what’s happening on the cutting edge. We’re supposed to be pushing the envelope and we will continue to do that. 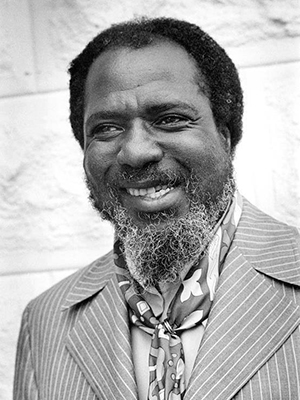 TSM: I would think what would impress him is what we did last week in Istanbul – having his name at the top of International Jazz Day, sponsored by the Thelonious Monk Institute, UNESCO. I don’t think a lot of people yet have really understood what happened. We had 196 countries to commit to celebrate International Jazz Day. There ain’t nothing that 196 countries commit to celebrate all on the same day on this planet. Jazz has always been considered an international endeavor and an international art form. Now, everyone is on the same page in terms of jazz as a profound tool for peace and profound tool of communication. You have to remember that every oppressed people tend to see their aspirations and dreams in their art and it’s no different for African-Americans. So if you look at fundamental principles of jazz, everybody’s got something to say. Everybody’s included. You have a team and an ensemble. You have an individual and a soloist. There’s a responsibility of the team to the individual, but also a responsibility of the individual to the team. That’s a fundamental democratic principle. All of these kind of object lessons are taught within jazz. These are things that will help the world come together. For that reason, again, I say if Thelonious were here today and something like that was happening in his name, he would be impressed. 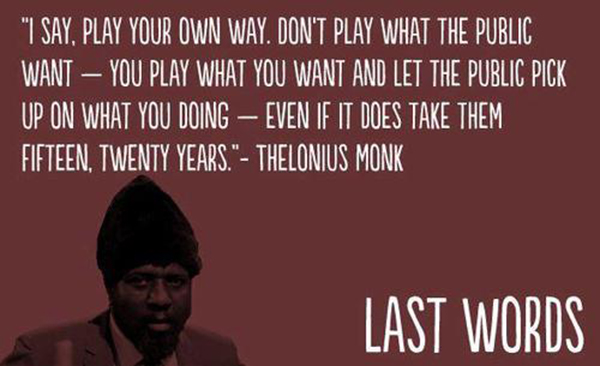 This is where T.S. Monk succeeds. As a musician, he has carved out a space for himself within the already crowded realm of jazz history. But artistic achievement has been done and will continue for as long as we continue to create. What it most intriguing about T.S. is his investment within the art itself. Many will play, few will cultivate. That will be the legacy of T.S. Monk. The application of his education was not concentrated towards merely sound, but his entire approach to life. This is why we have the Monk Institute. Under the guidance of T.S. Monk, music will be made better – not just his personal compositions, but those of an entire generation of young musicians learning the “philosophy,” finding their own individual genius. From Monk to Monk, the culture moves forward.