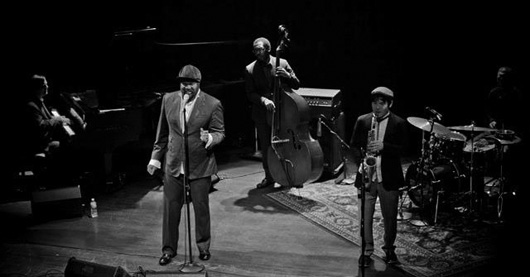 Grammy Nominee Gregory Porter wooed fans during a recent performance at Mayne Stage in Chicago. An amazing musical treat especially during Jazz Appreciation Month, Porter performed several selections from both his Water and Be Good albums including favorites like “Illusion,” “1960 What?,” “Lonely One,” “On My Way To Harlem,” “Be Good (The Lion’s Song)” and “Real Good Hands.”

There aren’t as many male jazz vocalists around today as fans would like, but Gregory Porter is one to make up for what the jazz world has been craving more of. Porter can effortlessly scat, improvise and accomplish amazing things with his voice. His creative storytelling skills and timely delivery has contributed to his rapidly growing success.

Backed by his band which included Chip Crawford on piano, Aaron James on bass, Emanuel Harrold on drums, and Yosuke Sato on alto sax, Porter took us on an emotional journey to which we could all relate. His signature soulful jazz and gospel tenor voice delivered lyrics of love and life, putting into words the feelings and experiences many have but can’t always verbally express. His warm, seductive, silky smooth voice and mastery songwriting make Porter so relatable.  He touches the hearts and souls of many just by being and expressing himself.  After singing “Mother’s Song,” a song dedicated to his mom, it was visibly evident that he himself was emotionally touched by it. He stated, “Singing this song is like a warm blanket being placed over me.” He had to take a moment to fight the tears. With shouts of supportive and comforting words from the audience, it wasn’t long before he was able to move on to his next selection.

Also adding to the great evening of jazz, appreciation was the way the band played with great balance and interesting techniques. Each was given several opportunities to display his solo abilities, which resulted in a roaring applause each time.

Gregory Porter wrapped up the show with one encore performance and he being the personal gentlemen he is, hung around afterwards to sign CDs and take pictures.

JD Allen - The Sound of Victory