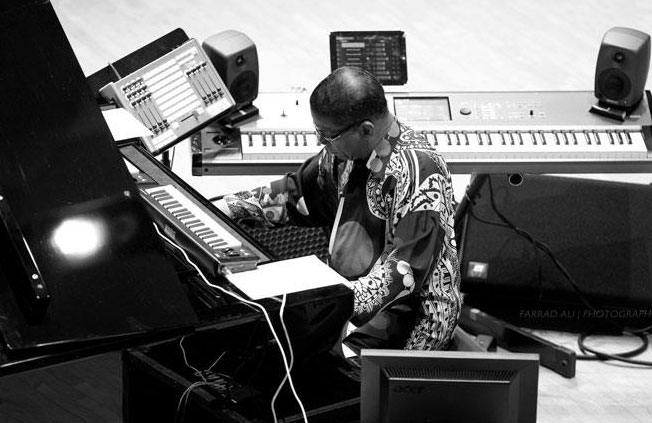 Herbie Hancock’s St. Louis fans sold out The Bistro, filling more than 1000 seats to hear this legendary musician and his outstanding band. This electrifying concert featured familiar tunes that help to catapult Hancock to fame. The audience showed their appreciation by dancing in the aisles and rocking to the beat.

Two and a half hours seemed to fly by as Hancock and his band soared through most of their well-known material including “Watermelon Man” (which made a reprise during the encore), “Cantaloupe Island”, “Chameleon”, and a solo piano version of “Maiden Voyage”. These signature songs captivated the audience and even the musicians, as they became engulfed in the sultry sounds jamming each hit as if they didn’t want to stop.

This award-winning band features Trevor Lawrence Jr. on drums, who is just as comfortable in a hip-hop setting as he is in jazz. He has worked as a producer for Eminem and Dr. Dre, co-writing many of their songs. Guitarist, Lionel Loueke certainly has a unique approach to playing guitar that must be experienced in person, rather than discussed. James Genus is one of the most sought after bassists around and currently plays with the Saturday Night Live Band.

Loueke delighted the audience with an extended guitar solo, jamming as the rest of the band left the stage and allowed Loueke to highlight his talents. This musician’s skills overflow into other musical genres; he is also known in the hip-hop arena for his rhythmic beat boxing. The Berklee School of Music graduate has been living in the United States for 12 years, and hails from the West African country of Benin.

Another highlight of the evening was Hancock singing an old favorite, “Come Running to Me”, from his 1970’s album, Sunlight. This song features the use of the vocader, which has recently suffered neglect with the emergence of auto-tune, which is used excessively by today’s artists. Hancock is known for taking his music to another realm by adding effects that wow crowds.

Hancock continues to give a full concert experience with a combination of new creations, experiments with different genres, and familiar hits. “Ask Herbie about Skrillex or some other kind of rap music and you’ll have yourself a thirty minute conversation,” Lawrence explained. “What Herbie has done in the past is not all that he has to show for; he’s still hip to all kinds of music.”

It is difficult to ignore Hancock’s accomplishments and vast amount of studio output as a musical leader and sideman. Aside from being a part of Miles Davis’ second great quintet, Hancock has also recorded alongside artists such as Wes Montgomery, Freddie Hubbard, Dexter Gordon, and George Benson to name a few.

Herbie Hancock is one of the most important musicians of the 21st century with impactful and lasting contributions. This musical icon has been consistently popular through the decades and is still attracting new generations. If Hancock can sell out to a crowd that included dancing teenagers in St. Louis, then there is no telling what the future holds for Hancock fans worldwide. Hancock’s connection to musical greats helps his audience to unify through the sounds and influence of greats like Miles Davis, Charlie Parker, Monk, Dizzy, Louis Armstrong, and Billie Holiday. Hancock creates a jazz family reunion for fans young and old during his concerts.

Jazz enthusiasts around the world can get excited because UNESCO Ambassador, Herbie Hancock announced this week that in addition to celebrating jazz music in April, which has been designated Jazz Appreciation Month, there would now be a grand finale. Hancock has taken the celebration to a climactic end naming April 30 as International Jazz Day. The goal is to highlight the art of jazz internationally.

After much maneuvering, this special commemorative day was organized by the U.N. Educational, Scientific and Cultural Organization in partnership with the Thelonious Monk Institute of Jazz, which Hancock chairs. The inaugural Jazz Day will feature jazz superstars in concerts in Paris, New York, New Orleans, and jazz events in countries around the world.

On April 27 leading up to the big day, Hancock will be joined by Dee Dee Bridgewater, Hugh Masekela of South Africa, Brazil’s Tania Maria, and other artists in concert in Paris. This celebration of jazz will also feature improvisational workshops, master classes, and discussions.

Hancock will then begin April 30 with a sunrise concert at the famed Congo Square in New Orleans, the birthplace of jazz. Local jazz artists Terence Blanchard and Ellis Marsalisare are slated to jam in this early morning concert. Hancock, known for experimenting with technology, will perform his signature piece, Watermelon Man with high school musicians from around the world via an Internet link.