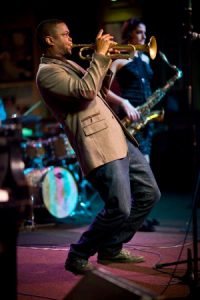 Outside, its 40 degrees with an occasional drizzle and no chance of a white Christmas in Chicago. But inside the Jazz Showcase, it’s warm, cozy and festive where a nearly full house is enjoying the holiday jazz/funk performance of the Maurice Brown Effect. Chicago’s beloved trumpeter has come home gift wrapped and prepared to share all that he has created since his last visit.

Maurice Brown, an accomplished trumpeter, composer and bandleader is a native of Chicago (Harvey, IL) now living in New York, has been credited with successfully fusing hip hop and jazz. So much so even jazz purists have been known to identify with and take pleasure in his compositions.

On this night, Brown’s quintet which includes bassist Solomon Dorsey, tenor saxophonist Chelsea Baratz, drummer Joe Blaxx and pianist/vocalist Chris Rob (the younger brother of actor/comedian Craig Robinson from “The Office”), also a Chicago native, played several selections from Brown’s Cycle of Love CD. Brown explains that Cycle of Love is his interpretation of the different stages we go through in our quest for love and happiness. Brown led each song with an explanation of what it meant and how it related to the cycles of love. From “Fly By Night”, the first stages of love to “Time Tick Tock”, which refers to the active mind at work when we take the time to weigh the good and the bad.

The quintet worked well together, merging each of their own sounds into a glorious array of catchy, rhythmic hooks and beats and also played some untitled selections from an upcoming album. Brown jokingly referred to them as “New Tune #1,” “New Tune #2,” etc. until he can name them. They included an assortment of upbeat funky melodies with an easy feel.

Brown’s spirited interaction with the culturally diverse audience was refreshing and well received. Whether he was on the stage or going from table to table, he melodically manipulated his way through the soul of his listeners, instinctively knowing what delighted them.

Brown took time after the show to mingle with his fans. One can look forward to more great work from this artist.

To get to know a more personal side of trumpeter Maurice Brown, check out the iRock Jazz interviews with him. 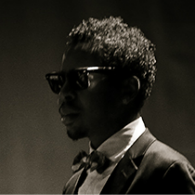