It is said that home is where the heart is. At Yoshi’s Jazz Club in Oakland, multi-Grammy nominated Cuban pianist and composer, Omar Sosa and his Afreecanos quartet performed to a full house or what seemed to be a house full of friends.  As he walked out, draped in a flowing red traditional African garb and carrying a dimly lit red candle adorned with a scarf, Sosa immediately made the stage his home and we all his honored houseguests. A Bay Area resident for a short time in the mid 90’s, Sosa welcomed the eager audience with a bow of gratitude doubling as a gesture of invitation to sit in his living room and experience an intimate jam session. As relaxed as I felt, I couldn’t help but also witness a heightened level of anticipation brought upon by the expressions of expectancy on the faces of both those familiar and unfamiliar with Sosa’s music.

Versatile, innovative, and internationally acclaimed for his improvisation and use of a myriad of styles, Sosa opened the set playing delicate chords to a lush backdrop of futuristic, ambient sounds. The rest of the quartet cascaded in a caravan of folkloric chants, African instrumentation, and electronic beats before plunging headlong into a tight, funky groove that seemed to blend from one song to the next for the entire performance.

Playing selections from his studio album, Afreecanos, which is a celebration of African music in jazz and Latin music, along with new material from a project currently in production, entitled, Afri-Lectric, Omar Sosa and his band took the audience on a genre bending journey in music. Mozambiquean bassist, Childo Tomas’ groove heavy bass play and drummer, Marque Gillmore’s rapid fire hip hop beats drove the rhythm section that inspired collective heads nods from every soul in attendance.  Fellow Cuban, Leandro St. Hill’s rich reed play ushered in tinges of smooth jazz, while Sosa approached the keys with an elegant fury and precise tenderness that eloquently built a sonic tension erupting in a celebration of sound.

Throughout the night the quartet shared a humorous, playful exchange that without a doubt can be attributed to the mutual camaraderie and the freedom expressed from their foray into skilled improvisation.  Their chemistry was amazing, almost rehearsed, but certainly natural. Sosa, sliding up and down the piano bench, standing up, pointing, smiling, and making eye contact with each musician, spoke in some form of musical code that seemed to awaken more inspired play. And they responded without disappointment. Paying homage to his Afro-Cuban heritage, Sosa also creatively mixed in a message with the music—tempering the revelry with spoken word sound bites chronicling Black achievements.

For the entire two hour set, the Afreecanos quartet virtually played non-stop without one song being formally announced. Intentional or not, no one seemed to care. Once immersed in the music, you simply went along with the flow pausing only to catch your breath. Applause (they received a nearly 10 minute ovation after the set) only served as fuel, which was more than enough to last through their second show. By the shows end, it was evident they didn’t run out gas, they simply ran out of time.

The Omar Sosa Afreecanos Quartet is currently touring Europe.  Check out Omar Sosa and a full list of his recordings at omarsosa.com. 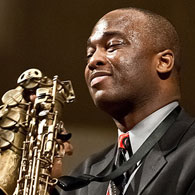