YOU ARE HERE:Home » Interviews » Yuna: Remember My Name
Interviews 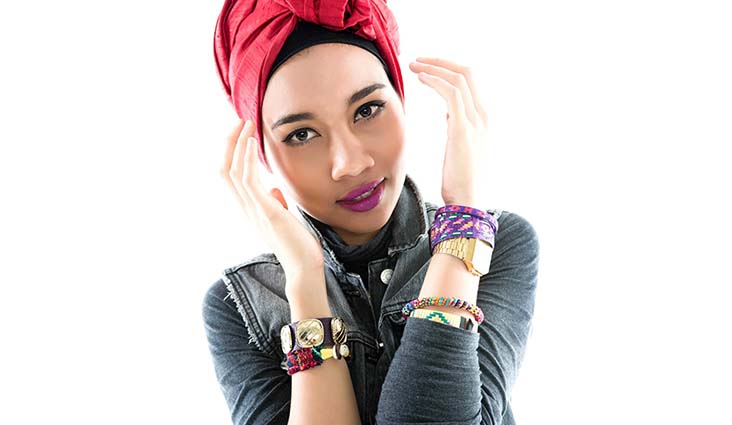 Whether you believe in destiny or fate, singer-songwriter Yuna has been blessed with it. The not so new comer is climbing the success ladder, not in a “material” sense, no, she is living her dream and that is success in and of itself. Born in Alo Setar, Kedah, Malaysia, Yuna began writing songs at 14 as a way to express herself as if she were writing in a diary. “That’s so funny you said that. Actually, yeah, maybe right now you’d be embarrassed to tell people (everyone) that you had a diary when you were a teenage girl,” she says. “But yeah that actually helped a lot in my writing because I’m the only child, so I didn’t have siblings or sisters to talk to about boys, you know what I mean, so I found peace in music. Whenever I listen to music, I’m like, ‘I should write my own version of it’. I feel every girl needs it. So if I were to get married and have kids, I’d buy a diary for my kids.” 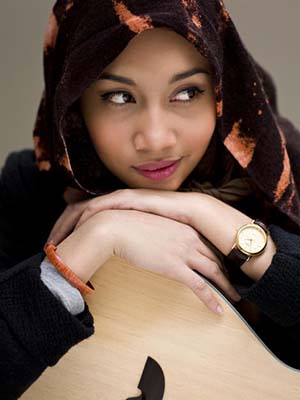 Being a Muslim woman from Malaysia, Yuna had no difficulties being heard here in the U.S. or taken seriously, it was quite the contrary. “When I first came out here; I’ve always been really positive, I told myself, I love music, just like anybody else. Everybody loves music and I happen to make music, so I feel like I should share this with everybody and that’s always been my attitude towards it,” she says. “All of the negative things I don’t really think about it because a lot of people would think – like the people from back home, ‘Ah but you’re Muslim; you’re going to the States’, but to me the States has one of the biggest Muslim populations in the world. I have nothing to worry about, it’s such a beautiful spirit; it’s such a beautiful religion and there are a lot of different people in the world and me being a Malaysian Muslim, I’m just like one of those people who are just like, ‘Hey, I’m here I can make music’. So I feel like people can appreciate that, people should see that. It’s really cool to be out here, people are wondering who I am and what I am and where I’m from and I’m always happy to answer those questions.”

“Live Your Life”, is the song that catapulted Yuna in to a stratosphere of what classic songs are made of. She reminisces on how the song and beats came together. “It’s pretty funny, I remember walking in to the studio, and he (Pharrell) was working on a beat – working on music and I was like, ‘Ah yeah this is really cool’, and I thought it was for somebody else. I thought he was working on other tracks for other people because I just got there and he said, ‘Yeah, you like it? Ok cool, you can work on this, write about cool stuff’. A lot of people were telling me, ‘Yeah maybe you can write about dancing and clubs or something like that’. And I said, ‘Uh, I’m not really the dancing and clubbing type (laughing)’. But this music is really giving me good energy and I feel like if I sing about something truly special, people can actually listen and feel good. Like when they’re having a bad day – I don’t know because I’m like that. If I have a really really bad day and I listen to something uplifting and immediately it makes me feel better and sometimes I really just need to listen to a good song. I’m really happy that “Live Your Life” is the go to song when you’re feeling down and blue. So I wanted to write something that was really inspiring.”

Yuna actually started out as an artist on MySpace in 2006. Her songs were both in English and in Malay and her popularity grew in Malaysia due to her following on the well-known social media website. “When everything started to get bigger, I got signed to the Fader label, so I had no choice but to move out here (to L.A.) and focus on my solo career and it’s been wonderful. I’m now signed to Verve/Universal and I’m working on my second album. It’s been quite a journey (laughs) for me. It’s close to 10 years. When I think about it – it’s like wow in two years it’s going to be 10 years in music for me, yeah it’s crazy.”

Sixth Street Yuna’s new EP will be released May 7th 2013. She says the name comes from where she lives and what it represents for her. “Sixth Street, is an EP actually, so it’s about five songs and we wanted to make an EP for my signing with Verve. So I have five songs I wanted to share with my fans and they can download them for free and enjoy them as an introduction in to the second album that is coming soon in September. So while waiting for that, they have Sixth Street.”

“So Sixth Street is where I live in Downtown L.A. and I love my apartment and this is where I write my music, it’s my cave. I don’t really go out so I made it everything – my home, my studio, I could chill by the window and just write. So all of the songs from this EP were written here and I’m at a place where I finally know the person that I really am and comfortable being the person that I am and at the same time learning new things about myself, so yeah that’s Sixth Street.” 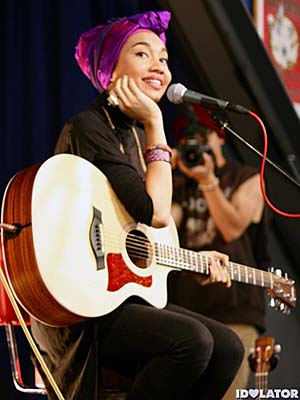 Yuna is a gentle spirit and her purity captures her audiences. Even in speaking with her, you can tell she is genuine about who she is and about her music. Although, it’s something she doesn’t think about, she says, audiences can indeed see and feel when someone isn’t being who they truly are. And as a result, it is something she doesn’t have to concern herself with. “I don’t know, I never really thought of it like that. I believe in whatever you do – you have to be sincere, it comes with everything, the person you are. If you just want to get in to music because you want to make money it will show and people will know that, and I feel that we have a lot of smart listeners, we have a smart audience, right, because of the internet and everything so, they will pick up on pretentious music really easy. I’m guess I’m really lucky from day one, I’ve been writing and it’s just like, I have this attitude where I just write and think, ‘It’s ok if people don’t love this’, it’s really how I feel and I believe that somebody out there would be able to relate to this and I’ve been having that same formula and that makes me really happy.”

When she is not performing, touring or writing songs, Yuna prefers and enjoys the luxury of interior design. She says she loves decorating her home, creating art and just enjoying her living space. “I do a lot of things to get inspiration from, for example I’m really really a homey person and I love interior design, so I’m always either cleaning the house or moving furniture around or getting cool furniture for my house and I love, I love doing that. I love getting pillow cases for my pillows, that and I also I got in to terrariums recently, so I make terrariums. You know, the tiny gardens in a jar and I sell them at a store downstairs here on 6th Street. That’s my hobby and I love creating things, I like painting on canvas I’m not a good painter but I paint the pretty things I would like to have in my house.

While creating, writing, and touring the world, Yuna also runs her online clothing store IAMJETFUEL back home in Malaysia. The idea started from her love of vintage clothing and the name that came from a thought “I also run a clothing store back home in Malaysia, so I’m busy with that and I’m always on line for the on-line store and the store back in Malaysia as well. I’m the kind of person who can’t stay in one place and not do anything (laughing).

Writing music was initially something Yuna did for herself, as her expression and then it became something that she wanted to share with the world. She saw that keeping this expression was a way of selfishness and so sharing herself with the world, Yuna the international singer was born. Her music, her sound, her honesty and genuine spirit will make us remember her name for years to come. “The first song I wrote in my room when I was 19, I just wanted to write for myself but I thought, that’s a little bit selfish when you want to do things for your own good, after a while you feel like, ‘Aaaah, I want to share this people’. Like when someone plays you a beat or a drumbeat, that’s really cool and I want to share this with people and that’s what I always think whenever I write music…”