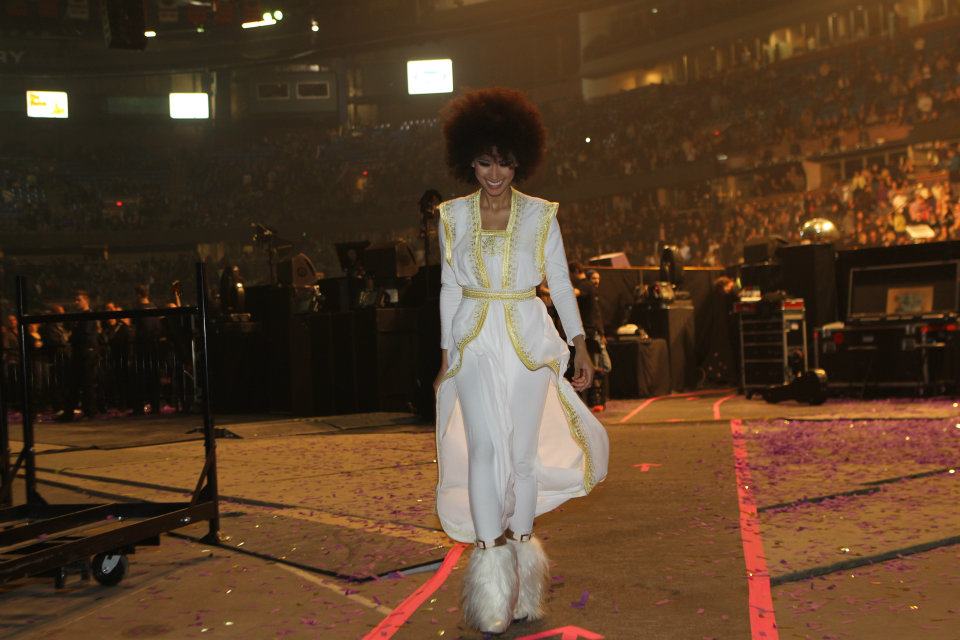 Singer, songwriter and guitarist Andy Allo is an up-and-coming artist on the music scene. Allo, the protégé of funk legend Prince, has a truly unique and refreshing sound. With her new album Superconductor out this November, Allo graciously offers the music community with a diverse, sonic collage.

Allo is both young and beautiful. Her striking sense of taste and innate musical instincts are rare and valuable qualities. It is no surprise the singer possesses these traits. She has been immersed in music her entire life. Born and raised in Cameroon, Allo learned piano from her mother at age seven. By singing and harmonizing with her older sisters, Allo discovered her keen gift of voice. “Growing up in Cameroon, life was very easy and simple,” she says. I was surrounded by music. Every morning there would be records playing, like Dolly Parton and Miriam Makeba; and on road trips, my father and I would listen to Fleetwood Mac.”

In her budding career, Allo has had the privilege of playing with Prince. While touring together, Allo and Prince shared musical bond that resulted in a deep friendship. This has led to a collaboration between the two of them on her latest project.

Superconductor is a display of Allo’s musical freedom and individuality. This artist has broken from the constraints of the mainstream. She beautifully incorporates elements of R&B, Soul, Jazz, Alternative Rock, Hip-Hop, and “a whole lot of Funk.” Allo’s music is filled with intricate texture, killin’ grooves and sexy vocals. The delicate, but precise guitar riffs heard in songs like “When Stars Collide” show evidence of Prince’s influence. Superconductor is well-produced with crisp, tight hits and fills. The musical form is fun, creative and produces a dynamic and rich sound. The musician’s sense of groove really comes out in her song, “People Pleaser”. She utilizes space and simplicity to create a rocking, aggressive and edgy song that will make you want to dance. Superconductor is filled with quirky, clever lyrics that are accentuated by Allo’s powerful voice. With players like Trombone Shorty and saxophonist Maceo Parker, this album is a collection of diverse musical creativity.

Andy Allo is a new cat on the scene that is truly bringing a fresh and exciting sound to music. “There’s a lot I want to share with the world,” says Allo. From listening to this album, there is a lot worth hearing.