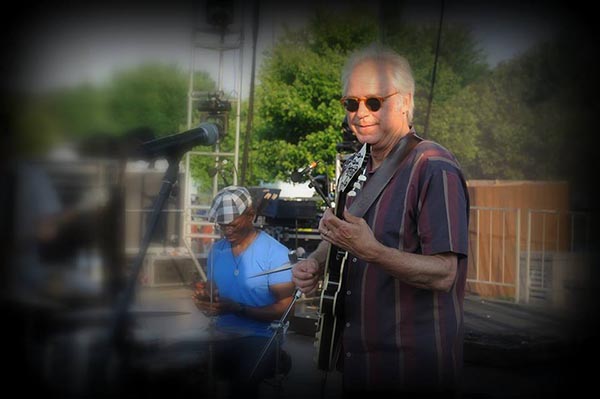 People are often accustomed to great outdoor fun being a centerpiece of their Memorial Day weekend.  The city of Atlanta is no exception.  Atlanta’s penchant for a great time, combined with its sophisticated southern flair, makes it the perfect city for the marriage of great jazz and the beautiful ambiance of Atlanta’s biggest park (Piedmont Park).  Since 1978, the focus of the Atlanta Jazz Festival has been to showcase Atlanta’s cultural and musical diversity, as well as provide a family oriented venue to bring the community of Atlanta together.  If this year’s strong international and talented local musical line up were used as a gauge, then the 2014 Atlanta Jazz Festival was a huge success.

The festival kicked off with action packed performances by the North Atlanta Center for the Arts Jazz Band, Roberta Gambarini Quartet, and the always dynamic Roy Hargrove Quintet.  Roberta Gambarini was an instant hit with her vocal interpretations of classics by Billy Strayhorn, and songs from her two Grammy nominated albums: Easy to Love and So in Love.  Roy Hargrove closed out the first day by electrifying the audience with an array of jazz compositions from his storied 24 year career. Hargrove and the band let loose with a few up-tempo renditions, and some of his signature smooth ballads played by Hargrove on the flugelhorn.  For good measure, Hargrove even threw in some vocal action on “Never Let Me Go.” (Later at a workshop, Hargrove would jokingly downplay his singing ability, saying he sounded like a “rooster”.) 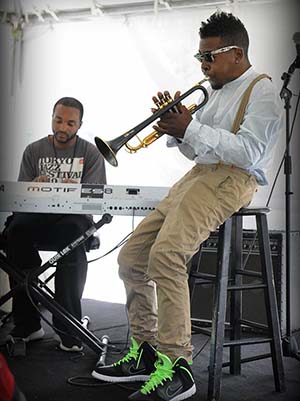 The second day featured the Edmar Castaneda Trio, Somi, and the Eldar Trio on the international stage, which was always well attended by people craving for unique and exotic artists.  Columbian harp player Edmar Castaneda wowed listeners, with his blend of Latin rhythms and supreme improvisational skills.  Young, but accomplished pianist Eldar Djangirov, put on a masterful display worthy of Carnegie Hall.  Not to be outdone, Somi showed Atlanta what her unique blend of American and African soul was all about, as she requested that the crowd “Ginger“ her, or, add a little spice to the performance.  She also transformed two classics by Fela Kuti and Nina Simone into her own masterpieces.  Somi turned Fela’s Lady into African Lady, as well as Simone’s Four Women, into Four African Women.

iRock Jazz was able to catch up to Somi after her performance and get thoughts on the heavy subject matter of Four African Women:

“My version is about the burdens that African women carry and finding those parallels.  The first verse, I’m talking about genocide and what it is to lose your family and still be strong.  The second verse talks about what it is to no longer appreciate your own self beauty and reach for bleaching creams.  I also talk about prostitution and sex workers in Africa and how they put their health at risk to actually leave and get a visa, and I also talk about circumcision.  I know it is a very heavy subject matter, but to me Nina was always about truth telling, so I was inspired to do the same.”

Somi was able to skillfully interweave serious subject matter, social commentary, and feel good dance music.  The audience was with her, every step of the way.

However, most did not expect the seismic explosion of raw talent awaiting them on the main stage.  Ester Rada brought the house down with her melodic blend of R&B, ska, reggae, funk, dance, and jazz.  Rada’s cultural background is just as diverse as her musical sound.  As an Ethiopian Jew from Israel’s toughest neighborhoods, she knows a thing or two about determination.  Right from the start, people recognized that they were watching a performer that put a lot of work into their craft.  Backed by her strong funky rhythm section, The Magnificent Seven, Rada blew through her set and had everyone wanting more.  Her vocal range knew no boundaries, as she reminded listeners of Amy Winehouse, Ella Fitzgerald, Nina Simone, Jill Scott, and Erykah Badu. (Just to name a few)  Comparisons to these great vocalists are easy to make, but Rada has her own style to offer.  To show their appreciation, her newly made fans swarmed her tent, in a rush to buy her new self-titled cd Ester Rada.  Her CD’s sold out in a matter of minutes! 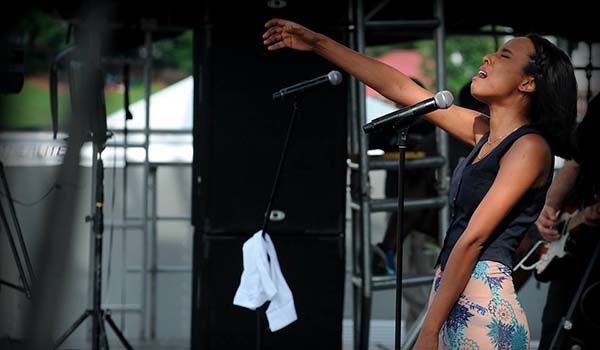 The second day of the festival ended with two outstanding acts, Russell Gunn’s Krunk Jazz Orkestra and Christian Scott.  Local favorite Russell Gunn brought an entire orchestra to bring his compositions to life, and even had his own hip-hop emcee to get the crowd “krunk”.  Just when you thought the energy level couldn’t get any higher, Gunn further energized the crowd by bringing renowned vocalist Dionne Ferris to the stage to sing one of her own songs “Fair”, and the classic El Debarge song, Love Me in a Special Way.  Christian Scott closed the night by utilizing his masterful technique on various brass instruments, as well as his unique fusion “stretch” sound.  If the full second day of the festival wasn’t enough, then why not party into the late night with Jon Batiste and Stay Human, who put on an after festival concert at the W Midtown hotel.

The final day of the festival kept the diversity theme going strong.  Patrons saw some extraordinary playing and singing on the international stage.  Moroccan Ali Amr’s qanun playing provided a special experience.  (The qanun is a Turkish stringed instrument that is similar to a zither.)  Also, Brazilian, Diego Figueiredo provided some soothing bossa nova tunes from his acoustic guitar. Finally, French/Dominican jazz vocalist Cyrille Aimee put on the type of vocal performance that has won her so many awards in the past.  The interaction between the artists and crowd was the most exhilarating aspect of the international stage.  The experience was so intimate and informal.  The infectious movement of all in the audience was even enough to make a wallflower like me groove a little bit. 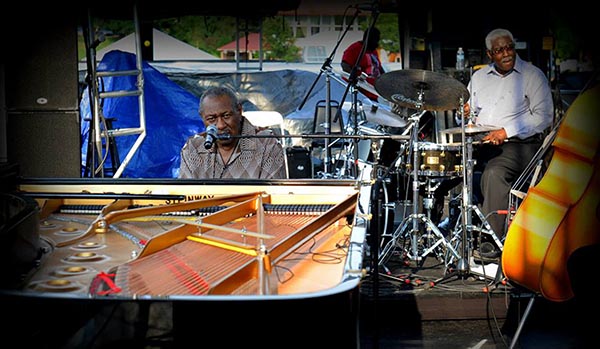 The final day of the main stage brought some notable performances by legends on the piano Freddy Cole and Ahmad Jamal, as well as on the guitar, Bill Frisell.  The USAF’s Airmen of Note warmed the crowd up nicely for an extended evening of legends.  Local favorite Freddy Cole took everyone back to the Golden Age of jazz, with his swinging piano playing  Cole also crooned his way into the hearts of many in the audience, who showed their appreciation by giving Cole several standing ovations.  Freddy Cole was so fired up, that he kept playing until he had to be told his time was up.  He didn’t want to stop playing, and we didn’t want him to stop either.  Now that’s what I call dedication!

Next to come was Bill Frisell’s Guitar in the Space Age Featuring Greg Leisz, Tony Scherr and Rudy Royston.  Frisell’s unique mixture of rock, country, and jazz was a melodic trip.  The addition of a pedal steel guitar really added that spacey feel that Frisell was going for.  The final act saw Ahmad Jamal give a strong performance that really resonated with the Atlanta crowd.  Jamal gave his all to the crowd, and the crowd made sure Jamal knew that the feeling was mutual.  Even a few raindrops didn’t stop the momentum of Jamal.  Most people chose to get wet, rather than miss an excellent performance by one of jazz’s true living legends.  For their efforts, they were treated to the grand climax of Jamal’s performance.

The Atlanta Jazz Festival was three of the most musically rich days of my life.  I felt like I grew as a listener each and every day.  Sometimes saying that jazz is a global art form can become clichéd, but after you experience the Atlanta Jazz Festival, one can have a true appreciation for what that phrase really means.  It is absolutely amazing to think of where jazz started, and where it is currently now.  I have to thank a long list of great jazz ambassadors like Louie Armstrong, Count Basie, Dave Brubeck, and Duke Ellington, who introduced this great southern art form to people all around the globe.  Many of these jazz greats refused to charge admission, in order to spread the message of jazz to as many people as possible.  All of their efforts have come full circle.  What we see now, in the form of great domestic and international artists, is the fruit of their labor.  The Atlanta Jazz Festival is a worthy celebration of their efforts.