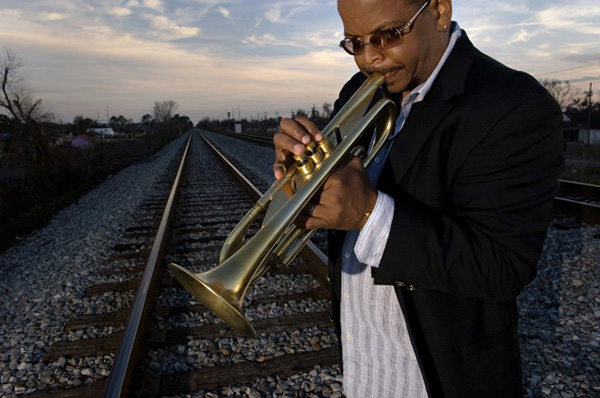 With a resume that goes on for days, Grammy-Award winning trumpeter, film score composer, composer and arranger, Terence Blanchard is set to release his 19th album Magnetic as a co-leader/leader in May (2013) on the Blue Note Record Label. The replacement to Wynton Marsalis in the legendary jazz group “The Jazz Messengers”, led by drummer Art Blakey, Blanchard has been playing and making music with virtually every legend in jazz, starting at a very young age. A brilliant composer as well as trumpeter, Blanchard has also worked on scores for several films such as “Inside Man”, “Miracle at St. Anna” and “Red Tails”. In addition, Blanchard served as the artistic director for the Thelonious Monk Institute of Jazz Performance for ten years. At age 51, Blanchard’s forthcoming release features a cast of musicians that perhaps gives a nod to the upbringing he experienced as a member of the “Jazz Messengers”. Employing pianist Fabian Almazan, saxophonist Brice Winston, drummer Kendrick Scott and twenty-one year old bassist Joshua Crumbly, Blanchard turns to each member to provide material for the album, thus, each having a featured composition.

In addition to this solid unit, Blanchard makes room for special appearances by fellow Blue-Note recording artists Lionel Loueke and Ravi Coltrane, as well as the legendary Mr. Ron Carter on bass.

The opening and title track “Magnetic”, sets the tone of the record. Blanchard and Winston play in tandem a repetitive theme as the rhythm section creeps in; adding layers to the already building composition. The use of electronics throughout, especially on Blanchard’s trumpet, definitely contributes to the pensive vibe that the compositions harmonic landscape utilizes. Winding chromatic lines and bursts of expression from Blanchard propel the rhythm section through to a brilliantly stated piano solo from Fabian Almazan and then a restatement of the central theme. 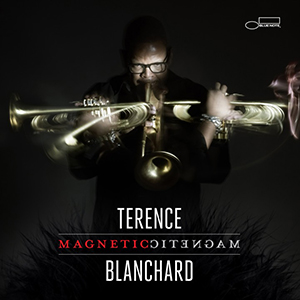 Bassist Joshua Crumbly’s contribution to the album entitled “Jacob’s Ladder”, was one of the most compelling, as well as a wonderful choice for the second selection of the album. The track features excellent solo work once again from Almazan which showcases his patience as an improviser.

Three tracks in we arrive at the second of four tunes that come from leader Terence Blanchard. In a complete change of direction, the frontline of soprano and trumpet navigates their way through the bop melody of “Don’t Run”. Stripping the band of piano for the tune, guest soloist Ravi Coltrane makes a great statement, seamlessly tying together the sounds of Sideny Bechet and modern language that the listener would be accustomed to hearing from Coltrane. Blanchard follows with a similarly diverse exhibition of beautifully crafted lines soaring into the upper register at times with fluidity for miles. The track then comes to one of the most swinging parts of the record – when Kendrick Scott and Ron Carter meet in duo fashion briefly before the re-entrance of the horns to take the theme out.

“Pet Steps Sitter’s Theme Song”, is one of pianist Almazan’s contributions to the record and features the guitar work of Lionel Loueke. Loueke adds a sense of mystery to the track with punctuations in sound-effect fashion behind the saxophone solo that encourage interaction in the rhythm section, especially in the interplay between guitar, saxophone and piano. Blanchard goes back to utilizing the electronic sound on the trumpet and solos over the steady groove and pensive harmony laid down by Scott and Almazan, once again aided by the work of guitarist Loueke.

Similar to the previous tune, “Hallucinations” also features guitarist Loueke but in a dramatic fashion. The spacey feeling of the tune provides a different texture from what has occurred on the record up to this point and Loueke takes full advantage of the openness to the solo section.

Drummer Kendrick Scott shows his skills as both a soloist and composer on the track “No Borders Just Horizons”. If it wasn’t apparent already, the two minute unaccompanied solo to open the track solidifies the facility and musical IQ that Scott plays with at all times. 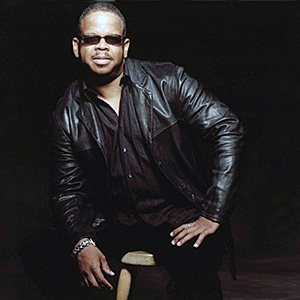 On “Comet”, another composition from Fabian Almazan, the listener is treated to the brilliance of the composer. No horns, bass or drums, this track puts Almazan front and center and for good reason. Acting as a perfect buffer between the track that came before it and after it, “Comet”, was a personal favorite of the record.

Rounding out the record are the compositions “Central Focus”, “Another Step” and “Time to Spare”. “Central Focus” is another occasion for the band to swing and in doing so; Blanchard favors the purer trumpet sound sans electronics. As this track closes the band goes directly into “Another Step” and Blanchard is right back to the trumpet with electronics sound and like Blanchard, the reset of the band jumps on board. Bass and drums lock to lay down an authoritative groove as Blanchard goes on another adventurous solo. It’s with the final track that we hear the contribution of long-time saxophonist of the band, Brice Winston, via his composition “Time to Spare”. An up-tempo groove tune, it features the solo work of the composer as well as Blanchard and Almazan. The interplay between Winston and the rhythm section for the duration of his solo is marvelous and moves things to a nice boiling point by the end of his solo, which leads into Blanchard’s solo.

As previously noted this record covers a lot of ground and does so in a way that has a great flow. The first album from Blanchard since his record Choices in 2009, Magnetic is a must have for the loyal and the curious listeners of Terence Blanchard.