YOU ARE HERE:Home » Interviews » Pharoah Sanders: A Spiritual Journey Through Music
Interviews 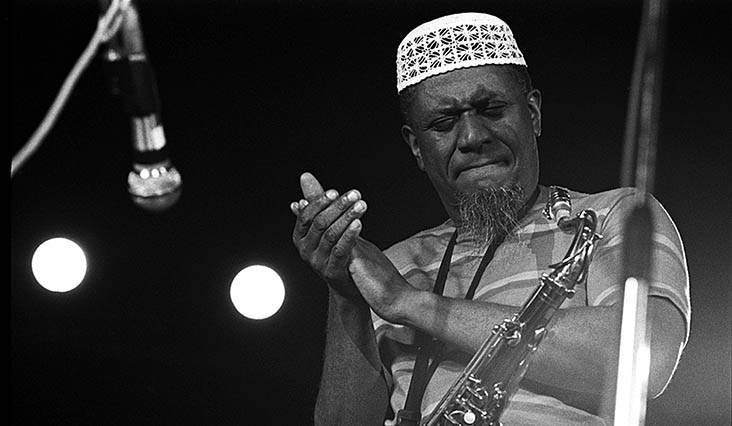 Jazz, the genre that has sub-genres within the culture itself. There is Swing, Bebop, Harmony, Afro-Cuban, Modern, Smooth, Cool, Avant-Garde and Free or what some call Cosmic/Mystic/World Fusion Jazz. This sound of the 1970’s includes artists such as Sun Ra, Lonnie Liston Smith, Ronnie Laws, Yusef Lateef, Alice Coltrane and none other than Pharoah Sanders. 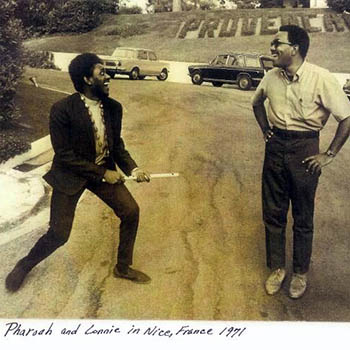 Born Ferrell Sanders in Little Rock, Arkansas, he began playing the tenor sax; his instrument of choice in the 1950’s and even backed up Bobby Blue Bland for a short time. In 1959, Sanders moved to Oakland, California to attend college and eventually moved to New York City and played with bandleader Sun Ra and the Arkestra. It was Sun Ra who gave Sanders the nickname “Pharoah”. Known most for playing alongside John Coltrane, Sanders’ name is heavy enough to stand on its own. After his time with Coltrane, Sanders began to record on his own and perfect his distinct sound. A sound he also played with Coltrane’s widow Alice. Sanders and Alice Coltrane collaborated on various projects including the 1970 album Journey in Satchidananda. Sanders says his sound is just him, nothing more or less. “It’s just me, I don’t get into all of that; I don’t know how to get in to all of that. I guess I would be putting myself in something if I did. I just travel, perform and I love people to come hear what I’m doing now. I just try to play me, that’s it, an expression.”

Known for his harmonic, multiphonic techniques on the sax, Sanders says he always played the harmonica growing up and it helped him play the way he does now. “I like the sound of the harmonica and I’m always trying to see if I can play a note, maybe like a cord on the same note I’m trying to develop. I don’t think I got it yet I’m still working on it,” he laughs. “It’s kind of strange because you have to press your mouthpiece and reeds, I just don’t give up.”

Back to Sanders’ sound; it is a spiritual, meditative and thought provoking sound. Thoughts that make a listener ask, “What was he thinking when he composed this song/record?” For instance, his 32-minute masterpiece, “The Creator Has A Master Plan” from his 1969 album Karma takes the listener on a spiritual ride. A ride that encompasses highs and lows, frequencies and vibrations that can’t be defined, cosmic interludes and expressions only Sanders can express. Two minutes in, there is a little Coltrane sound of “Love Supreme”, but again, this is all Sanders. “I try to bring up something way out; a title or something, in some ways,” he says regarding his spiritual connection to his music. “It’s whatever I feel like, that’s what I put down. It has to be something of more of an expression, awareness.”

He says the title “The Creator Has A Master Plan” came after meeting Leon Thomas at the Dome Club in New York City. “It used to be called St. Martin, and we’d have jam sessions there. I asked him, ‘Do you want to do some things because I like what you’re doing?’ And he said, ‘Yes give me a call’. We talked on the phone; I had a record date coming up and I had this song that I wrote and I felt it needed some lyrics so I asked him if he would hear it and write some lyrics. That night he went home and he called me the next day and he had some lyrics and I didn’t really like the lyrics and I told him, ‘No man, I don’t want these; these are great but it’s not what I want to hear’. And I asked him to do something more spiritual; feel it that way and then write some lyrics. So that’s what that is about, he wrote some lyrics and that’s how the song was made up.” 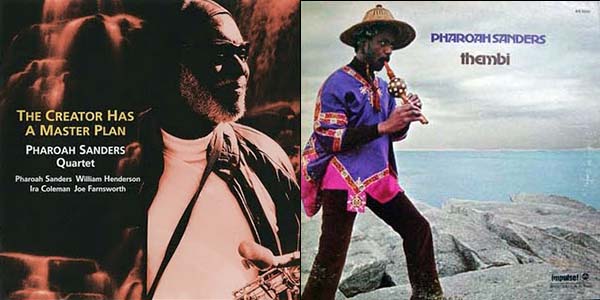 Outside of “The Creator Has A Master Plan” another fan favorite is “Astral Traveling” from the 1970 album Thembi. Lonnie Liston Smith, Sanders’ key partner helped create the trance-like song. “We were in the studio; that was Lonnie Liston and he was playing some chords and started to make changes when we were getting ready to work on some of the songs I wanted to record,” Sanders says. “So I had my soprano and he started playing and I started playing with him. The people in the studio really liked it and we started blowing and that’s how that came up. It wasn’t my writing it was more him playing changes. It wasn’t a melody Lonnie had me play, I just started playing. Nobody said play this chord change or this different melody, he was just playing. I felt what he was playing. I felt it would be a soprano, so I said, ‘Let me get my soprano on this one, whatever he is doing, I like it’, so that’s what I did.”

With the perfect marriage of jazz and Hip-Hop back in the early 1990’s, many legendary musicians have been sampled such as Grover Washington, Jr., Miles Davis, Idris Muhammad, Coltrane and yes, Sanders. The younger generation is even bringing the two back together by using jazz loops in their songs, such as newcomer Kendrick Lamar. And while some elders in the jazz community may not like the fusion, Sanders on the other hand agrees with it. “I feel good about it,” he says. “If they want to stretch out and do something different, they’re honoring other musicians, it’s all connected in a positive spiritual way. The way I feel about it; it’s great. If somebody uses my music or one of my licks, ok great. That’s how I feel about it.”

Sanders is very discreet when it comes to speaking about his friend and musical teacher John Coltrane, however, he did tell iRock Jazz that one of the things he took away from playing with Coltrane is his spirit. “Playing with John is like a spirit when he’s playing. That spirit is still inside of me. I still remember that feeling, it’s a certain a feeling,” he says. The feeling I got from working with John, were the things that he was doing. I could imagine he must have been practicing very hard to do those things that he was doing. And I know that as another person if he could do that then maybe one day I can wait until my turn come 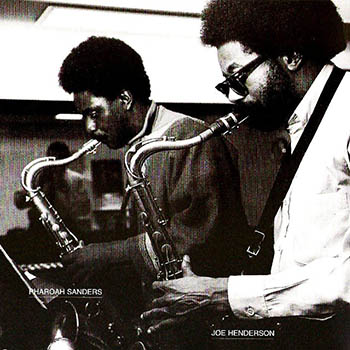 around and find whatever that is, I don’t know what it is. I’ve never had that spirit with anyone else. When I was working with Sun Ra, he was very different. And both of them remind me of each other. When I was around Sun Ra, I don’t know what it is, but it reminded me of John. Not playing, just being around him. Not for a long period of time but just being around him. When I was working with John Coltrane we never talked too much, we would sit beside each other and never say a word. So I take that feeling out of all of the musicians I work. If I don’t get that kind of inspiration I have to make it up myself.”