YOU ARE HERE:Home » Interviews » Justin Kauflin: Seeing Through His Musical Vision
Interviews 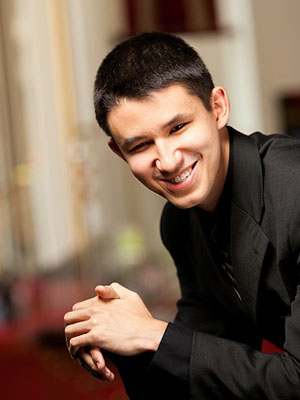 How many people are fortunate enough to be mentored by the legendary jazz trumpeter Clark Terry? Say, Miles Davis and Quincy Jones. And how about those Quincy Jones mentored; Michael Jackson, Tevin Campbell and Tamia to name a few. There is an individual who can say he has been blessed to be mentored by both greats, he is Justin Kauflin. Pianist, composer and bandleader, Kauflin is one of jazz’s new generation sensations.

At the age of two, Kauflin began playing piano and classical violin. By age six, he was performing at various venues including weddings, concerts and as concertmaster of orchestras. At eleven, he lost his total physical vision to a rare eye disease. Kauflin says music was a part of his family and his parents encouraged him (one of five children) and his siblings to get involved with something. “So there was a piano in the house, and I guess I was naturally kind of attracted to the piano at first at two, and fooled around with melodies and things like that. And because they got me started on the violin at four, it wasn’t really my instrument of choice but they were able to find a teacher who was comfortable teaching a student with low vision,” he says. “So I started with the violin and that teacher had experience with low vision students and that worked out well. Then they finally found a teacher on the piano when I was nine and that is when I started doing the piano.”

It is often said that when a person loses a sense such as sight their hearing may improve, or vice versa if there is a loss of hearing their sight may improve. Kauflin says he doesn’t believe that to be true. And because of his loss of his “physical” sight, his musical vision enhanced. “Before I lost my sight, music was definitely there, I was in to it, but not so much. There were a lot of other things going on that I could do. I’d rather be outside, rather than practice or play video games,” he admits. “So when I did lose my sight, it got rid of a lot of the peripheral things that tended to be distractions. I didn’t have those things to do so I found myself sitting at the piano more and more. Because I lost my sight and because those distractions were gone it became something that I actually began to love as opposed to something that I was kind of interested in. Music became more central in my life and a lot of people ask, ‘So you can hear things better, now that you can’t see’? To me that is a bunch of baloney, I was always able to hear pretty well and not forced, but I had to rely on what I heard may be a little bit more once I lost my sight but that’s something that I never really thought changed. It was something that helped focus me once I lost my sight. I just brought me to the forefront.”

The transition from classical piano to jazz piano came after Kauflin auditioned for an arts program at the school of the arts in his hometown. He says going in to the classical program would have been a challenge because he wasn’t reading braille music and classical music is more about sight reading. “They said I could come to the program (classical) but they kind of put me in the jazz program as a solution,” he says. “It didn’t take long once I started at the program, it was a perfect match. Jazz being something that is traditionally passed on in an oral fashion; I really fell in love with it, I really loved the freedom it gave me as a musician. I learned to better express myself I think more than I could have in the classical realm.”

Kauflin’s introduction to the great trumpeter Clark Terry was while he attended William Patterson University. Kauflin says Terry had been involved with so many other universities however, at the time he was ‘attached’ to his school. Al Hicks (creator of the documentary Keep On Keepin’ On), and friend of Kauflin also went to the university to study drums. He was the link that put the pianist and trumpeter together and as the saying goes, “the rest is history.” “He (Hicks) went to Clark’s house a bunch to help out, so he was pretty close with Gwen and Clark, just helping drive Clark around and he said, ‘Man you should come to the house and hang’”, Kaulfin says. “It started pretty informal and we just kind of went to Clark’s house once or twice a week and then we’d do a little bit of playing but mostly hanging. We’d hang at the kitchen table and Clark would tell stories for hours. That is kind of how it started. He would come to the school once a week to meet with a group and I was in that group. Al was kind enough to get me to Clark’s house just to hang with him. I graduated and he had to move to Arkansas for health reasons and we continued to make the trip down there. We went down there once every two months and we would spend a few days to a week with him just hanging and playing and talking.”

Kaulfin continues his admiration for Terry, “He is totally selfless. He thrives off of giving and teaching and sharing. It’s contagious and it’s definitely wonderful to be around.” And his meeting with Quincy Jones? Kauflin says that was due to ‘hanging’ with Terry. “Last summer, we kind of collided. I went down to visit Clark and Quincy was also visiting Clark at the same time. They were working on some kind of project and we were both at Clark’s house at the same time and that’s how I got to meet Quincy and play for him a little bit. We spent the whole afternoon and evening doing what we do at Clark’s; you hang around, you eat and you chat and tell stories, that’s how I got to be around Quincy and Clark at the same time, something that was extremely special to me. To be able to see these two people that have known each other for so long and to see Quincy who is somebody who is huge and to see the respect he had for somebody like Clark was something that left a real mark on me. I was just blown away. Just the presence of both of those people and I’m right between them.”

At just 25, Kauflin has been truly blessed with meeting and becoming a student of Clark Terry’s and meeting and taken under the wings of Quincy Jones. At 23, Kaulfin produced his first album Introducing Justin Kauflin, in 2011 he was one of 12 pianists who were selected to compete in the Thelonius Monk Institute of Jazz International Jazz Competition, and in 2012 he was voted “Jazz Artist of the Year”. Kauflin says, “Yes it’s a blessing. It’s a blessing and that is really all there is to it. I’m fortunate and very thankful to have gotten them, that’s really all there is, it’s a blessing from God. When stuff like this happens, in my case and most people’s cases you do put in a lot of work and you do the best you can and that stuff really comes from God and that’s all I can say. I’m very thankful and hopefully the goal is to show my gratitude to God and to people like Clark for opening up those doors a little wider for me to sneak through. With music and my life I try to say thanks the best that I can.”

“Being comfortable with where I am came from the experiences; trying to learn the best I can from the experiences I’ve had and it puts me in this position,” says Kauflin when asked where his confidence and faith in himself comes from. He continues, “I have learned something from another pianist in that completion from a couple of years ago (Thelonius Monk Competition), ‘I’m going to play what I play, and if it’s good it’s good and if it’s not it’s not, and there is nothing more you can do’. And that was a good lesson for me, it’s not so much of being confident, but being honest. This is where I am and I’m not going to diminish it or blow it up more than it is, this is what it is and I’m going to be honest about it and I think that meets the goal for me. I’m going to keep on working and not diminish what I’m doing, like recording the CD, before I actually did it I thought, ‘Oh I’m not ready, I don’t think I’m ready to record I don’t think this is a good time’. And I will never be ready, I had to change my mindset, ‘It’s like no it’s not the fact that I will never be ready I need to caption this right now where I am’.” 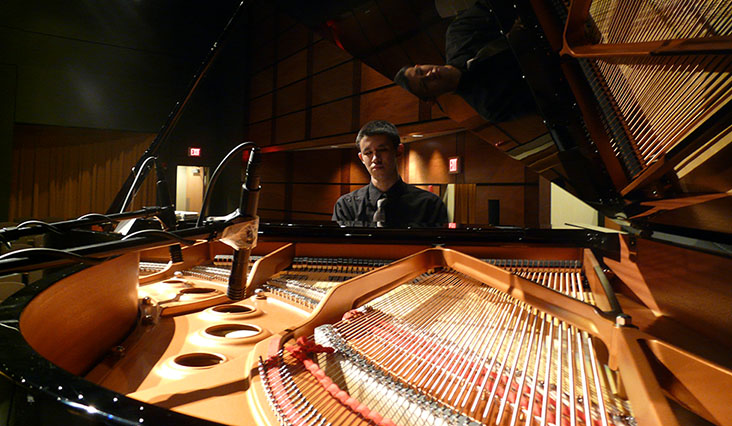 Kauflin’s sight these days comes through his eye seeing dog Candy, a gift he found in Morristown, New Jersey and she travels with him wherever he goes. “She is a sweetheart, she’s a real sweetheart. I’ve had her for four years now. I finally decided to get a dog while I was living in Brooklyn. It was just too much. I’m still comfortable with the cane and I think the cane is fine but it was nice to have someone with me even if it was a dog to give me a little bit more confidence of getting around the city. She definitely helped out a lot. She (me) gets gigs,” he laughs.

Justin Kauflin is definitely a musician on the rise. While he may not be able to physically see, his passion and love for music is his true vision:
“I love the way that music moves me, it’s something that I love. I love the kind of power that it has and the feelings that I get from listening to music and being a part of it is what I want to do. I want to share that; I want to make that connection with people. It’s another form of communication. I think it’s a very powerful form of communication. Of sharing whatever it is, life experience an idea and it really resonates and it succeeds where words fail in a lot of cases. It doesn’t need to be words to a song, it’s so powerful and moving,”