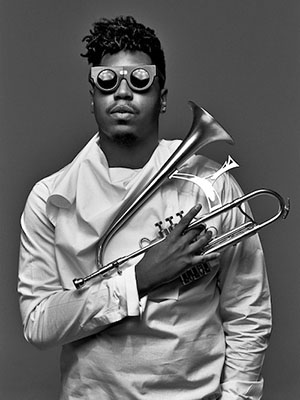 Christian Scott is a Grammy Award-nominated trumpeter, composer, and producer. The nephew of Jazz Saxophonist Donald Harrison, Scott has been called “Jazz’s young style God,” after receiving critical acclaim for both his progressive sound as well as his innovative fashion sense. His most recognizable attribute is a practice known as the “whisper technique,” a tone shift contradictory to that of other trumpeters. As a band leader, he has released four albums to date, including 2012’s Christian aTunde Adjuah.

Placing Christian Scott is difficult. On the surface, he is simply a musician. What complicates this narrative is his approach. He is a walking art exhibit; his sensibilities conjuring memories of jazz countercultural past. His New Orleans birthright prescribes that he plays the music of his ancestors, which he does quite remarkably, I might add. However, he engages this timeless form with an unconventional embrace.

Today, iRock Jazz sat down with the 29-year old trumpeter to talk about “presentation.” It is an idea that extends far beyond music. When it comes to Scott, we are left with more questions than answers; something that I believe he prefers. Whether it is his self-given name, his accoutrement, or his fashioned instrument, he is a menagerie of people, places and things. While we may never fully understand his eccentricities, we hope to gain a better perspective on the interworking of Christian aTunde Adjuah.

iRJ: Before an audience can assess you musically, they are first introduced to you visually—your signature trumpet and eclectic style. How does image play into your role as an artist?

CS: One of the first things I was taught growing up in New Orleans is that they see you before they hear you. When I first hit the road, I was playing with a lot of older guys that had come out of the neoclassicism generation. One of the requisites was that we had to wear suits. For me, I thoroughly enjoyed dressing that way because, at that point in time, I didn’t really have a perspective musically. It wasn’t until I left New Orleans and moved to Boston and got in college that my ideas about everything in life started to change—when I started to read James Baldwin, and Bertrand Russell, and Albert Camus, [Frantz] Fanon. I began to think more about what I wanted to express in terms of my experience. I was born in 1983, in the 9th ward, New Orleans, which, at that point, was pretty much a crack ruin. It’s hard to express that when you’re a nineteen year old guy dressed in a suit. I was very fortunate to have that type of thread game when I was younger, but I wasn’t really saying shit about who I was. I was just dressed nicely.

iRJ: You’ve talked about being pushed to wear a suit in your early days as a musician. As your career has progressed, you’ve found a new sense of freedom and independence that has enabled you to develop your own brand. When you’re looking to reinvent yourself, who or maybe what do you look to for inspiration?

CS: It’s funny because when I would come back home to New Orleans, all of the kids would always flock around me and I couldn’t figure out what the hell the deal was until one day my drummer Joe Dyson broke it down to for me. He was like, ‘Look man, when you put out Anthem, you were on the cover wearing Spizike Jordans and a gold chain and some jeans. You’re telling them that it’s ok for them to be themselves’. At the end of the day, this is music born out of black communities, man. And if you dress like you’re from the black community, you get ostracized or looked at with a discerning eye? That doesn’t make any damn sense. Something that Rob [Glasper] and I would really talk about is the fact that when you dress up in the suit and you perform this music in front of people, it says that in order for me to be valid in your eyes as a performer, I have to dress in conjunction with what the western canon says is valid. This music has a lineage and history and it’s not about dressing in a fucking suit and tie. The lineage is about expressing yourself through your experiences.

iRJ: Speaking to black culture, you’ve recently made connections to West African heritage. With your latest album, you introduced the name, Christan aTunde Adjuah. What brought about that change and what were you looking to convey to your audience?

CS:If I’m walking down the street and someone said some shit I don’t like, you’d have a hard time discerning whether or not Christian Scott was kicking your ass or if Christian aTunde Adjuah was kicking your ass. It’s the same person [laughs]. aTunde Adjuah has just been added on to my name. Scott is my father’s name, his father’s name and so on. I certainly have the utmost respect for them. But for me it was important to make sure that I had something that reflected what my identity politics say that I am, not something that was assigned to me. If someone calls me Scott, fine. If someone calls me aTunde Adjuah, fine. It’s like someone calling me one of my nicknames. I think a lot of people think I did this because I’m an angry black man and I hate certain people. That’s literally absurd. The reason I’m doing this is that when my kids get here, what they’re assigned comes from a place of love and the ideas that I actually want to convey. It’s not a negative thing, it’s a positive. 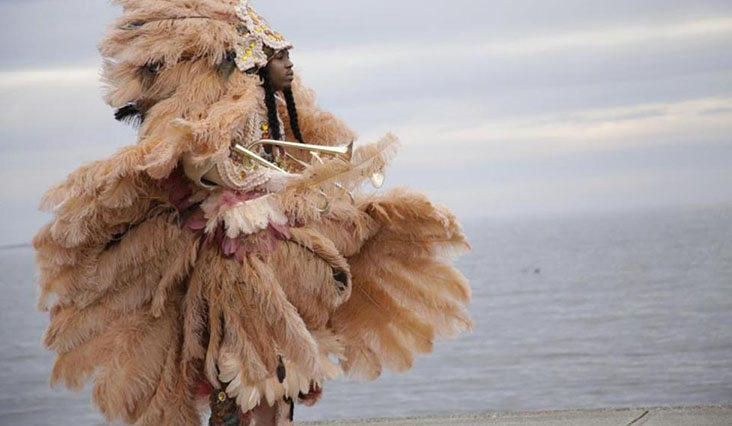 iRJ: Jumping back to fashion, you’ve done a lot of work with various brands over the years. What everyone wants to know is when we’re going to see you launch your own signature line?

CS: We’ve been talking about that for the last six months. I don’t want to give anything away, but it’s actually coming. It’s funny because I actually do a lot of interviews about this subject, but you would never see any of this shit in America. You’d probably hear more about this if you grabbed a Vogue in say Paris. They’re captivated by the music, but to them it’s a very interesting character type when they see someone whose fashion ties into all of these things in the way mine does. They’re intrigued by someone whose identity politics are diasporic West African meets southeastern Louisiana Native American meets Harlem [laughs]. That audience is very, very interested in what our communities is doing fashion-wise. 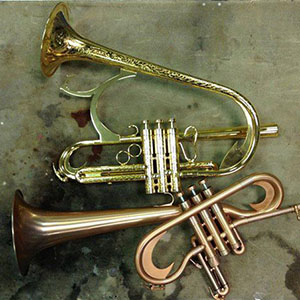 iRJ: You’ve actually designed your own trumpet. What purpose did that, whether it be functional or purely aesthetic?

CS: It’s a functional thing first. In the last two years, I’ve created three new types of Bb instruments. Aesthetically, they’re all different, but it all comes from function more than anything else. I never wanted to be a trumpet player. I wanted to play the saxophone like my uncle [Donald Harrison]. I didn’t like the sound of the trumpet. So, for me, it was important to try and create a horn that could do some of the things that saxophone players could do.

iRJ: What advice would you give to someone looking to upgrade their style?

CS: You start with accessories. One of my favorite places in the world is a spot called Beads of Paradise on 17th and 5th Ave. in New York. They have stuff from all across the world. For me, it’s cool to find all these things that are stylistically different; these are what provide you with character. When you do this, it doesn’t really matter what else you’re wearing, because your pieces are captivating. Shoes are important too. You’ll notice with a lot of women, once they get past your face they immediately look at your feet. It’s important to have a nice pair of walking shoes, a nice pair of loafers, a good pair of wingtips, and try and get some things off the beaten path—some type of suede or leather type shoes. The thing is, if you have a really bad ass pair of sunglasses, a really nice watch, and a nice pair of shoes, you could throw on a t-shirt and jeans and be cool. 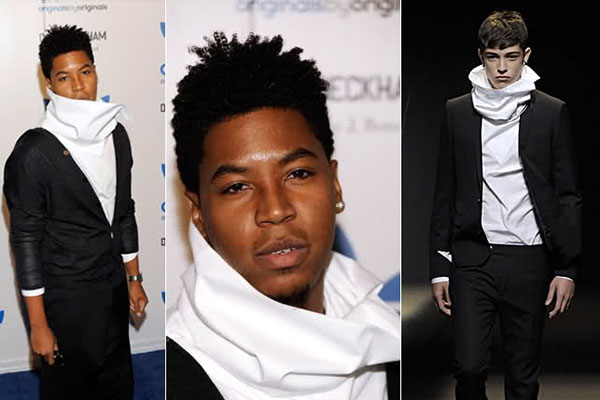 iRJ: Who are some of your colleagues that you look at and say, “They can really dress.”

CS: That’s interesting [laughs]. Because in jazz there’s still people fighting that whole “what they’re required to wear” shit. I love how cavalier Rob [Glasper] is in that he’s going to wear what the fuck he wants to wear. I like Andy Allo. Her fashion sense is really cool. I also like Annie Clark (of St. Vincent). We actually went to Berklee together. I think she dresses very well. Miguel, the R&B singer, I like his sense of fashion. I’m trying to think of someone in jazz. You know, Jamire’s fashion is off the charts too. I think he’s one of those guys in our community that’s a trendsetter. It’s tough because the vast majority of the guys in jazz are still on their suit and tie shit [laughs].

CS: I want it to be a question. Anyone that’s actually studied art knows that artists always exist on the fringe of multiple cultures. One of their best qualities is that they belong to so many things, but they don’t actually belong to anything. From a cultural standpoint, when I think about my fashion, it has to represent that. When I was younger, it was, ‘Oh nice, young black kid trying to play jazz. Cute’, [laughs]. Then when I started doing my own thing it was, ‘Oh Christian, he’s like a hip-hop trumpeter’. And then it was tattered jeans and t-shirts and really long crazy hair and it had the rock vibe going. And it went from that to having all of the West African accoutrement with shit from the Polynesian Islands and mixing the Pan-African with the Pan-Asian and blending that with the hip-hop stuff. No one can look at my style and say ‘That’s this…’ and musically they can’t either. I think it’s very important to make people ask questions before they come to conclusions about who you are as a person. 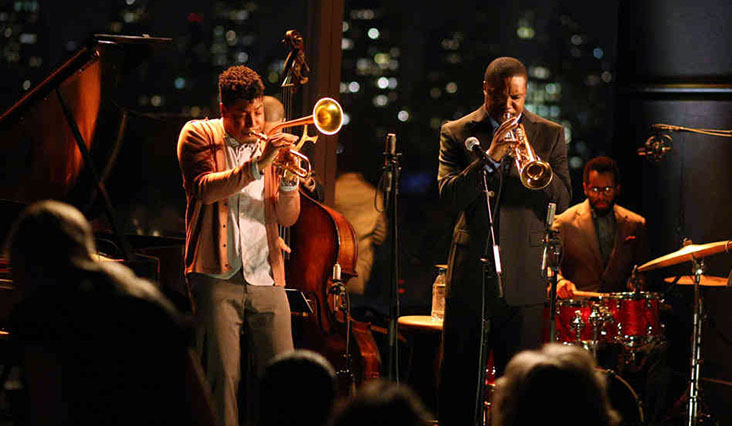 Perception often supersedes reality. For many, particularly those in the jazz community, this notion has placed invisible shackles on its participants—mental bondage actualized in physical form. Christian aTunde Adjuah has approached this with a revolutionary dissonance. Through music, he pushes the boundaries of conventional thought into the realm of modernity. However, it is his cultural work, deconstructing the accepted narratives of jazz that positions him far beyond the world of art and into something much greater. His visual presentation is a contemporary resistance movement. With Christian aTunde Adjuah, it’s more than simply self-indulgent sartorial splendor. This is where music meets fashion meets politics.