YOU ARE HERE:Home » Interviews » Lionel Loueke: A Heritage of Freedom
Interviews 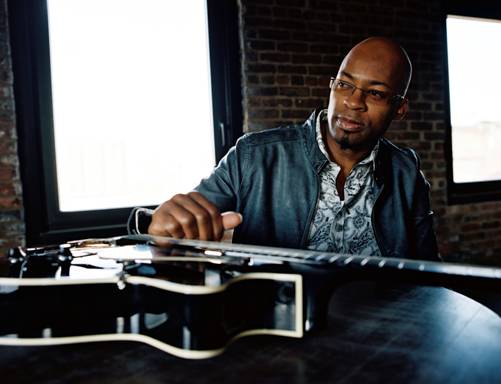 Humility is a characteristic few are graced to possess, especially in the music industry where recognition and praise often morphs into the type of self-adulation that can often taint the purity of the music. And when you can call Herbie Hancock, Wayne Shorter and Terrence Blanchard mentors, staying humble can be a stretch. Yet, while talking to virtuosic guitarist and vocalist, Lionel Loueke, it is clear that even with his iconic mentors and high demand with some of the world’s best musicians, he remains committed to allowing music to be at the forefront.

Loueke built a solid reputation as one of the most rhythmically astute musicians today. Leaving his native Benin in the early 1990s, Loueke’s star power rose significantly after attending the Thelonious Monk Institute of Jazz. Since then, he maintained a successfully balanced career. On one side, Loueke traversed the globe and added his melodic style to bands led by Hancock and Blanchard, and backed fellow contemporaries Esperanza Spalding and Blue Note label mate, Robert Glasper. The other side saw Loueke thrive as a solo artist and trio bandleader, blending Jazz and the music of West Africa on his acclaimed projects Virgin Forest, Mwaliko, and Karibu.

Loueke spoke with iRockJazz about collaborating with Robert Glasper, the duality present at the core of his project and why Blue Note Records is such a rich environment to record music.

LL: We both have kind of the same vision, which is to push the boundaries. There is no limitation on what we do. Robert and I have known each other for a long time. Robert is hard to put in a category. You can’t limit us to Jazz, African, or Hip Hop…it’s just music. I think that’s the way we play and the way we hear music. When I decided to make this project happen, he was the first one to come in to my mind because he totally understands what I’m doing and where I’m trying to go. We have a mutual respect for each other, so the session was great because we both made some great suggestions. It’s all about trying and seeing what works and what doesn’t. There were no moments where we didn’t know things were going to work.

iRJ: Your music is rooted in West African music, but incorporates many other influences that give it a beyond genre sound. Is pushing the boundaries of music a characteristic of African music?

LL: If you listen to African players play music, you know its African music. They are not trying to mix it with something else. But an artist like an Omar Sosa, who is from Cuba, is influenced by Cuban music, but he’s very connected to African music, so he’s blending both. There are some musicians who are not from this country, who live in this country, who keep their original influences and blend it with Jazz. Of course by doing that, they push the boundaries. People like Avishai Cohen from Israel and Vijay Iyer from India— those guys are pushing the boundaries.

iRJ: You mentioned Herbie Hancock, Terrence Blanchard and Wayne Shorter, who are popular music icons that you draw mentorship from. Can you talk about what their influence has meant to you?

LL: I’m learning from those guys all the time. It’s more of just learning on stage or just playing music. For me, it’s beyond the music world. I’m learning about life with them, and at the end of the day, that’s what we try to play anyway. Those guys are my heroes. They have so much experience and they approach the music in the best way I can imagine. They definitely helped me out and opened my ears and eyes.

iRJ: In Africa, music is traditionally treasured, but not always a path to success. How did your family feel when you left Africa to pursue music? What do they think now?

LL: Oh, it was hard. Any parent, especially from Africa, knows that everybody plays music, but it is often thought of something to do on the side. So for my parents, it was obvious to them they they wanted me to be something else and do music on the side. But, I didn’t want to be distracted with doing something else; I just wanted to focus on music. So, yes it was difficult. But today they are very proud and they are my number one fans.

iRJ: You mentioned your new project, Heritage, is “a direct reflection of your personal odyssey” and founded upon two heritages, the African and Occident. In what ways are both heritages present on the record?

LL: The percussion element comes from the African tradition. The harmony I’m using is not the harmony I grew up with and not harmonies commonly used in Africa. So, all the harmonies are those that I learned from the Occident. All of the influences come from experiences touring all over the world from Europe to America to Australia, so all those influences are present on the record.

iRJ: Your label, Blue Note, has a long tradition of releasing great music. Your new project, Heritage, is your third release with Blue Note. What makes Blue Note a great environment to record music?

LL: The first thing is that they recognize the originality in all the artists that they sign. If you think about it from the beginnings until today every single person on Blue Note has his own voice. Nobody sounds like anybody else. I think that’s the most important thing to start with because most of the other labels try to sign someone in a particular category. This goes for the whole music business— people are afraid to go for the unknown. People will most of the time need a reference and believe they can sell music because it sounds like McCoy Tyner or Wes Montgomery, instead of looking for somebody with his own voice. All those guys are original and we don’t need to have another Norah Jones or Ella Fitzgerald. The second thing, at least in my case, is that there is a freedom of expression. Nobody asked me if I would make this project more commercial. With the three projects I’ve done, I have been able to do whatever I wanted to do. It’s kind of hard to believe especially with a major label. There’s not that many out there that will give you that type of freedom.

Loueke is currently touring Europe promoting his 2012 Blue Note release, Heritage. Check out more of his music, touring schedule and more at www.lionelloueke.com.