YOU ARE HERE:Home » Interviews » Alfredo Rodriguez Makes New Sounds from All Spaces
Interviews 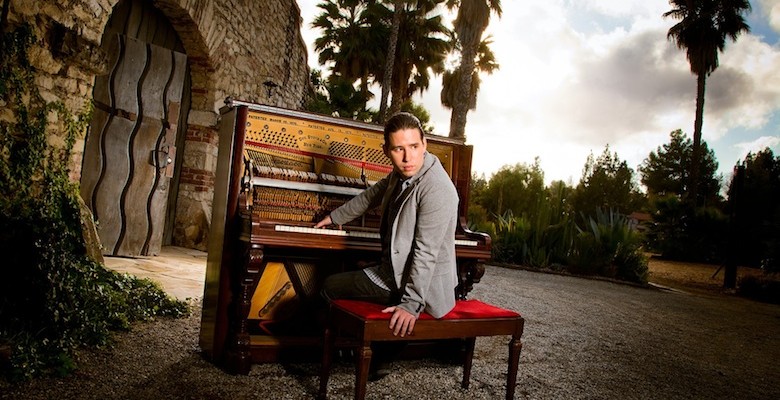 Oil and water. These are two items that do not mix. Some would say science and spirituality don’t mix either. Well, when listening to pianist Alfredo Rodriguez’s album Sounds of Space, it’s difficult to support the idea that barriers exist being the technological and the intuitive. The 26-year-old Cuban prodigy studied the best of the best American, Russian and French composers at a Havana conservatory of music since age seven, and absorbed the best of his Cuban musical roots. However, his artistry relies heavily on instinctive stream of consciousness composition, and not only allowed his education to influence his sound, but also the energy of his surroundings, be it nature, people, voices of the past and present. It’s that artistry that caught the ear of Quincy Jones, who produced Sounds of Space, and prompted him to anoint Rodriguez as one the best ever. Alfredo spoke to iRockJazz about his writing style, his yearn to learn and how we all have something important to say.

iRJ: Why did you call the album Sound of Space?

Alfredo Rodriguez: I love science. All the sounds I’ve been surrounded by seems like they have the ability of listening. So with this sound I have a truth, I relate all the sounds around me and I try to make music from all of those sounds. The sounds of the space surrounding me made me who I am.

iRJ: How many of the songs were already written before you started recording?

AR: The way that I did that record, I composed all the songs before we went into the studio. I composed some of the songs back when I was in Cuba and the other songs when I came to the United States. There’s the song “Crossing the Border” I wrote the week that I came to the United States. I spoke to the musicians and told them what I wanted to express with each song. I wanted my stories to be on record and the musicians express the words that I told them through music.

iRJ: The song “Crossing the Border” is the centerpiece of the record. There are these intricate and sudden rhythm changes in it, like much of the album.

AR: The way that I compose is just improvising. When I was 10 years old, I was falling in love with the way that we don’t have a chance to write something; we can just be ourselves. That like if I have conservations in English, you almost have to plan a response in the mirror because my English is bad, because my accent is bad because I’m Cuban, but the real truth is that I’m not going to not be myself, because that is not me. It’s me, but it’s not like speaking Spanish. What I like to do in terms of music is just sit at the piano and perform whatever is coming to my mind, same as what I’m doing with you right now. I don’t really care about making mistakes because from those mistakes, I am learning. I don’t really care about my accent because it’s me, it’s who I am. I’m being honest with myself. Music is the same in my opinion. Music is just to be you, express who you are. Inform yourself, educate yourself and try to learn from the people who know, and learn from the people who don’t know. So, the way that I composed this album, just sitting at the piano and performing whatever idea that’s coming to my mind. Those ideas that I really like, I just make a song from that.

iRJ: What was it like being produced by Quincy Jones?

AR: He just lets you go and it’s something very, very beautiful to see. So people tell you to do this or do that, he doesn’t work that way. The way that he works, he like to choose the people he likes to work with and after that, he just believes in those people and he lets you go. If he tells you his opinion, and you also tell him your opinion, you’re going to learn everything from he’s going to tell you, because he’s the master of anything in music. He’s just going to let you be free and be you. I was so impressed. He’ll say “I like this, I don’t like that, but be you,” and that’s so important for me. That was one of the best surprises that I got in my life.

iRJ: I read that Quincy said he thought you were one of the best pianists he’s ever heard. Considering all the legends he’s worked with, that’s heavy praise. How does that make you feel?

AR: I have to tell you, it’s really important to me that somebody that I admire so much he thinks that way about me. Really, I think that are some many people doing beautiful things and it’s kind of difficult for me to say that I’m one of the best piano players in the world. I don’t really think I’m the best of something. For me, everybody’s got something special to say and different to offer. But to know that Quincy feels that way is something very special.

iRJ: You’re a part of a great wave of young pianists who are taking Jazz by storm – Robert Glasper, Gerald Clayton, etc. Are there any pianists working today that inspire you?

AR: Definitely, and it’s not just piano players. As I told you, I’m inspired by everything. I am right now in my apartment and I have this view of a lot of trees. I’m looking at all the trees right now and they are telling me something important. They are telling that they are alive; they are telling me that they have music in their sound. So, that’s a great inspiration for me right now, and that’s the way that I see my life. These trees, these leaves, every human being, every living thing, they have something special to offer me. I’m going to learn as much as I can from all of those to try to make myself happy. There are a lot of great musicians doing things every day, but if you want to put something interesting in our interview about young people, please put that we need help. Please put that there are a lot of people doing great things and they need an opportunity. I represent somebody that sacrificed his life just to play music, but there are a lot of people doing the same. I just represent a lot of young people, not just as a musician but as a human being, doing a lot of beautiful things, and sometimes we don’t have support. We don’t have support because sometimes the money. People see a pianist and say they won’t make us a lot of money and they won’t sign them. So, that is what I want to say. Not just musicians, but in every aspect of life, we need to be together and help each other, tell people who we are and stop hiding. I know a lot of people are hiding, and I don’t know why. Everybody’s so special and everybody has something to say. It’s not fair. They don’t have the help, and I want to change that.