YOU ARE HERE:Home » Reviews » The Worlds’ Best Come to Play at the Detroit Jazz Festival
Reviews 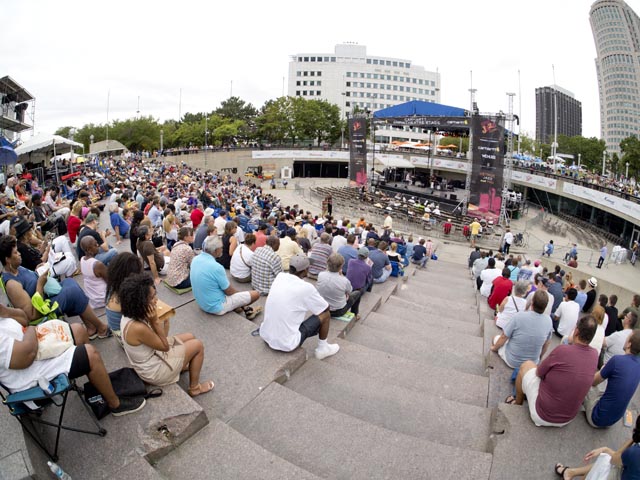 Now in its 33rd year, the Detroit Jazz Festival continues to live up to its reputation as North America’s largest free public jazz festival. It occupies a whopping two million square feet of downtown Detroit, culminating into a large soundstage at the beautiful Campus Martius Park near Cadillac Square. There were five stages and over 100 acts over four days, along with musical workshops, educational activities, fireworks and late-night jam sessions. iRock Jazz was there absorbing all of it, making it happen.

This year the festival featured notable headliners such as the Wynton Marsalis Quintet, the Pat Metheny Unity Band, Chick Corea and Gary Burton. The legendary Wayne Shorter, Terence Blanchard, Joe Lovano, Gerald Cleaver and Charles McPherson added to an already stellar list of jazz luminaries. Sonny Rollins reminded us of why “age ain’t nothing but a number” with his passionate and endearing performance, which officially opened the festival. This year’s lineup had “no additives or preservatives” anywhere to be heard. The large, encompassing crowds eagerly anticipated each performance soaking it in, hanging on every note. The warm summer breeze made the surroundings even more inviting.

Event planners made it easy to patronize local vendors by making services openly accessible around all the stages. Outdoor facilities were adequately supplied, yet hidden effectively without disrupting the general aesthetic of the grounds. The largest stage was at the Chase Bank Stage located in the center of downtown Detroit. It provided a unique backdrop to the sights and sounds. Memorable performances took place at the Volt Lounge, which is located at the Renaissance Center Marriott. These late night jam sessions were a veritable “who-is-who” of the festival. Musicians like Danillo Perez, Cecile McLorin and Gregoire Maret were easily spotted in the crowds. With artists like Etienne Charles and Sean Jones gracing the stage with their bombastic sounds, each session was a unique experience.

iRock Jazz worked with Chrysler (a very prominent sponsor) to produce a video detailing their strong relationship with the festival. Interviews with Wynton Marsalis and Ali Jackson gave an intimate look at their beginnings as musicians. In an open and freewheeling setting, the Detroit Jazz Festival offered several opportunities to interact freely with world class jazz musicians. At any moment you could be walking by the likes of Christian McBride or Kevin Eubanks as they prepared for their next gigs. It was a truly communal and welcoming experience. The large and expansive festival works hard not to leave anyone disappointed.