YOU ARE HERE:Home » Interviews » Sonny Rollins: In Search of the Man in the Music
Interviews

Sonny Rollins: In Search of the Man in the Music 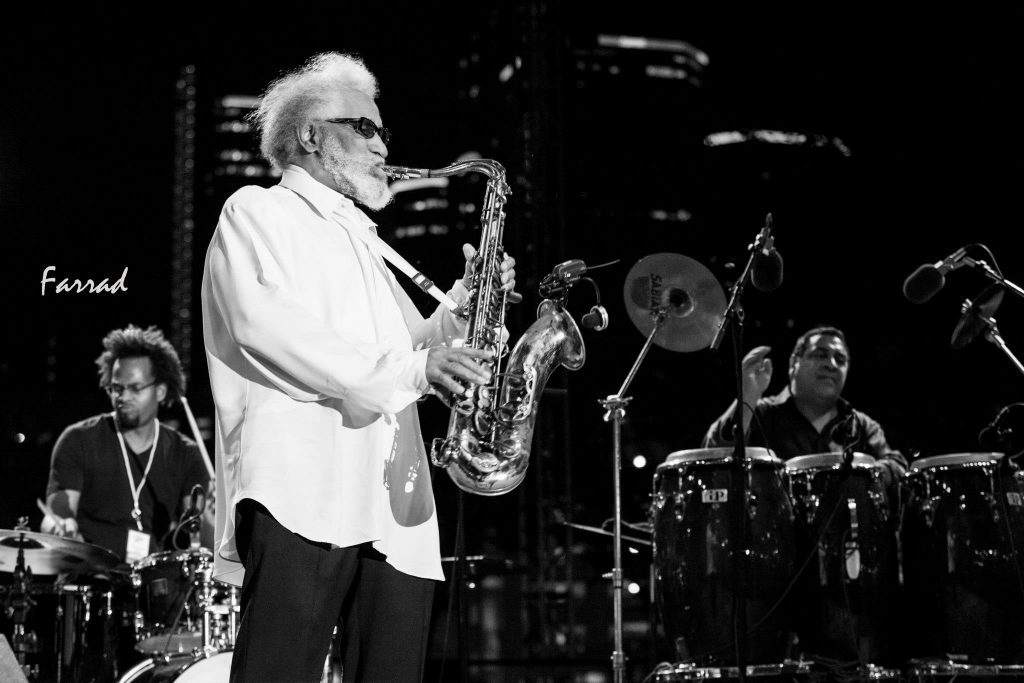 “Music expresses that which cannot be said and on which it is impossible to be silent.”
–Victor Hugo

Saxophonist, bandleader and composer Theodore Walter “Sonny” Rollins was born on September 7, 1930, and grew up in Harlem, New York in a community that was known also as Sugar Hill, not very far from the Savoy Ballroom and Apollo Theater. Rollins was born at a time when the Harlem Renaissance was in full swing. At the time, Sugar Hill was a modern day Mecca for affluent African Americans who enjoyed “the sweet life” with all the benefits that came from professional entitlement for a race of people 50 years past the end of Reconstruction. Around that time, the neighborhood was reaching its greatest acclaim, from having in its midst a significant number of black professionals active in business, law and the arts, including W.C. Handy, W.E.B. DuBois, Adam Clayton Powell, Jr., Langston Hughes and Thurgood Marshall. On any given day, Rollins could easily spot those individuals as well as the legendary jazz artists of the times, including Duke Ellington, Charlie Parker and Thelonious Monk, who became his musical mentor and guru.

Rollins lived comfortably among lush, well-manicured streetscapes that provided his neighborhood with a special sense of space and place while offering Rollins a secure youth to become a self-taught pianist, alto saxophonist and finally tenor saxophonist by the age of 16. It was a young Rollins, not yet 20 years of age, who would become the first of his peers to work and record with jazz musicians Babs Gonzales, J.J. Johnson, Bud Powell and Miles Davis.

This is the charmed existence from which Rollins’s musical talents were nurtured and quickly developed. These are the unique beginnings of the man whom I met on a recent Sunday afternoon. At once graceful, elegant, dignified, sensible, straightforward and remarkably down to earth, Rollins spoke with candor and humility of a grand musical life led almost entirely in the public sphere—except for two relatively short occasions, the first in 1959 when he withdrew from public performance and spent 16 hours or more a day practicing alone outdoors on Manhattan’s Williamsburg Bridge, and the second in 1972 to study yoga, Zen meditation and Eastern philosophies—for a span of over 60 years. Herein is a transcript of Rollins’s thought-provoking words shared on what was for me a monumental afternoon.

Lewis: It appears that your musical journey has been an intertwining of your spiritual and personal quest for freedom. What have been defining moments to bring you closer to the infinite “all knowing” and closer to your higher self?

Rollins: You’re asking me to share a lifetime of experiences. Well you know every human soul wants to be free – everybody wants to be free. So, it’s nothing that’s unique to Black Americans or Estonians or Czechoslovakians… That’s the nature of being born a person. I was brought up with a very activist grandmother who used to take me to a lot of political rallies when I was a little boy. And, so I got interested in many of those activities when I was a child. People like Paul Robeson, Marcus Garvey and Adam Clayton Powell, Jr., just everybody that you could name that was interested in freedom for our group. But, again, I want to stress that every group wants to be free and this is a natural condition that we all strive for. If it’s denied to us, then we’re going to try to get it because it’s a natural condition of the human spirit. At any rate, these were my beginnings. I had a musical gift that I was able to pursue and be helped along the way by many great musicians. I was born at the right place and at the right time – that being Harlem in 1930. There was a lot of music in Harlem. Music was all around and so my life has been a really charmed life because of it. I’ve also been blessed by being able to, well, I guess, rise as someone in my profession. You know that I’m really a self-effacing person. I’m not a guy that thinks he’s a big shot. I’m still trying to get someplace in my own mind. Please don’t think that it’s phony when I say that. Anyway, so that’s it. You’ve really asked quite a question.

“Not being tense but ready.
Not thinking but not dreaming.
Not being set but flexible.
Liberation from the uneasy sense of confinement.
It is being wholly and quietly alive,
aware and alert, ready for whatever may come.”
-Bruce Lee

Lewis: Interesting that you would say that you’re a self-effacing person, because that’s exactly how I perceive you. I also want to go back to the whole freedom and liberation aspect of our discussion and how it relates to your artistry. When you’re playing and improvising on stage, would you say that this is the time that you feel the most free?

Rollins: Well, yes, I would say so because the secret to my playing on the stage is what I see myself as being, and that is a true jazz musician. That means that I improvise during my playing. The secret to my improvising is that I make my mind blank. In other words, I learn the material that I’m going to use – the song, the lyrics, whatever it is that I’m going to play – and then I don’t think about it anymore. So when I go on stage, I then let the music play itself. And, that’s the only way that I feel you can do it. You see, I don’t feel that you can think and improvise at the same time. You can think and play at the same time, but not think and improvise. I’ve tried it and have found it to be impossible. For example, I’ve tried to come on the stage with something that I’ve thought about and that I think really sounds clever, and that I believe everybody will think, “Boy isn’t this great!” And, then I get on stage and can’t do it because the music is going by too fast. If I stop to think about something or to insert something into the improvisation, that spoils it for me and I lose it. So, for me, I’m unable to think and improvise. Then, too, I realize that I’ve always done that. When my mother bought me my first alto saxophone when I was about seven years old, I just went in my room and started playing. I didn’t know what I was playing but I just started playing what was in my spirit. And, that’s how it is today. 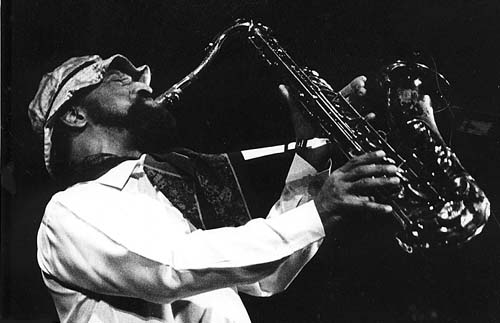 Of course, I’ve had to learn as I’ve gotten down into the music business and dealing with other musicians. I’ve had to learn certain rudiments like reading music and the stuff you have to do to make it among other well-known musicians. But, I mean, I was ultimately just a guy that started playing without knowing anything, and that’s how I approach it today. Of course, today I know the chord progressions and all of this stuff, and learn the music that we’re playing. But, basically when you’re improvising, you’re supposed to let the music come from the sphere–come from the universe. You’re not supposed to be thinking about it or trying to do something special. It just comes out, and this is the beauty of it. So, I consider myself very fortunate that people like what I’m doing because a lot of what I’m doing is not me. I didn’t know anything coming into this. It’s a gift. You know, this is it, and it is that music takes people someplace else. It’s another world. And it’s something that you don’t have to… you can’t describe it. It’s difficult to describe. Jazz writers have a hard time trying to describe this music. It’s that difficult. Music is another chord of existence. We don’t know precisely where it comes from. I’ve been born under this star and it’s really great. I realize that I’m a fortunate person who is grateful for being who I am. The fact that I’ve made an impression and that other people like my music, well this is beyond what I could expect for being a human being out here just like everyone else. I’ve been blessed and I realize that.

“Music washes away from the soul the dust of everyday life.”
-Berthold Auerbach

Lewis: I don’t know what it is about jazz, but I feel jazz is the most spiritual music. When I listen to jazz and I hear performers play and they’re improvising, all of these jazz greats. I get in a Zen within myself. It’s a Holy Ghost moment and that’s the way I have to say it because I’m Christian – it’s a Holy Ghost moment. My father asked me once if I had heard Red Garland play piano since he knew about my interest in jazz piano, and I remember telling him that I didn’t specifically recall hearing him play. Well, I recently bought the Miles Davis CD Relaxin’ and I remember first listening to that first solo by Red Garland and I tell you, it made me speak in tongues! I mean, it was that powerful! And, that’s how I feel when I listen to your music. When I saw you in Miami, it seemed like you were searching for something – that you were seeking something – and you weren’t going to relent until you got what it was that you were looking for. Does that accurately describe what happens to you when you’re improvising before a live audience? I don’t know if that’s necessarily a precise question…

Rollins: Not only is that a question, it’s a beautiful statement. Red Garland was a very good friend of mine personally. And, he was a great musician. When, he played, it’s like you say… The Holy Ghost got you. That’s it. That’s where it’s at. You see, jazz is a profound music. I’m always searching within the music because I haven’t found “it” yet. You know, there was a joke about this guy who was playing guitar and he was always playing one note. So, the guys went up to him and asked, “Look, man, why are you only playing one note?” So, this guy says, “Well, you guys were looking for it and I wanted to make sure you found it!” Well, I’m not the guy playing the guitar because I’m still searching. By the way, the chords, the harmony, the music… It’s all out there in space in the universe, and we as jazz musicians are always trying to get to that sound out there. So, that’s what it is. It’s a fantastic thing that we have in this world. This is a messed up world, but we have the music.

Sonny Rollins has spent a lifetime in personal and musical exploration resulting in some of jazz’s most purely innovative recordings, live performances and collaborations. His most recent CD, Road Shows, Vol. 2 (2011), released on Rollins’s own record label, Doxy Records, captures three live straight ahead jazz performances from 2010, with a heavy emphasis on Rollin’s 80th birthday celebration that includes a host of A list guest musical artists. More on Rollins, including his current musical itinerary, can be found at sonnyrollins.com.