YOU ARE HERE:Home » Reviews » Making A Memory Out of Three Songs: A Photo Essay of the Jacksons Live at the Apollo Theater
Reviews 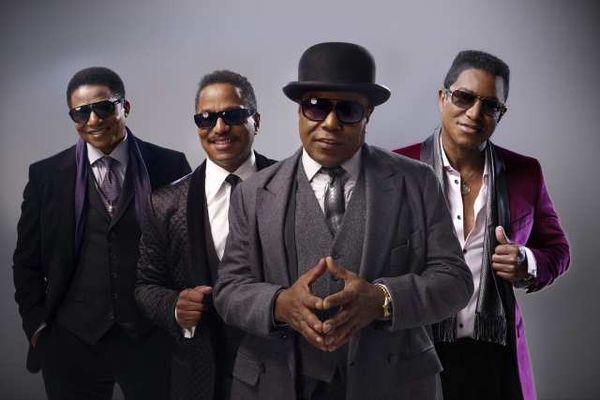 Three songs. As I emerged from the A-train and swiftly made my way down 125th Street, the words “three songs” echoed in my mind. As I crossed the stoplight at Frederick Douglas BLVD, the big red neon letters became clearer and clearer with every swift step: A-P-O-L-L-O. I squinted my eyes to see the name on the marquee while I removing a Nikon D3100 DSLR camera from the bag around my neck. Soon enough, the name was clear: The Jacksons! Sold Out! The Jacksons were performing at the world famous Harlem Theater as part of their Unity Tour, a North American jaunt that marked the first time the brothers toured together since The Victory Tour in what seemed like a forever ago, in 1984. In front of the lauded venue were vendors and instant artisans, selling Jackson paraphernalia; buttons, key chains, posters, post cards; you name it, they had it. Jackson fever had been reignited three years prior with the death their brother, lead singer and all-around deified icon, Michael. I had my apprehensions about attending an event to see the brothers without MJ; he’s my favorite artist of all time. It may not make much sense on paper to see a show with a group without the person who sang 99 percent of their songs, but the words “sold out” proved otherwise. Once inside, I received my credentials from the Apollo press agent who echoed, “You can shoot from anywhere on the right and left orchestra sections, in the back of the orchestra section, you can’t use the center aisles, and you can only shoot for the first three songs, after which you must all leave the building.” Three songs! No chance for me to see the whole show??!! I prayed and wished they’d make an exception, but to no avail! Apollo rules…. no matter what. 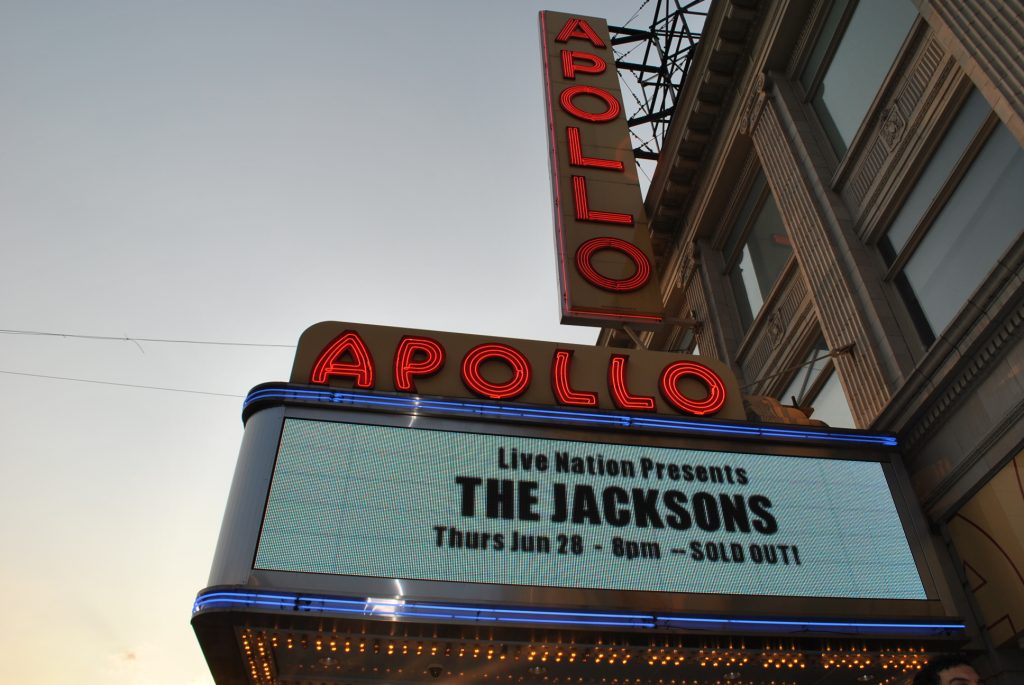 As I walked through the foyer, I saw up close and personal the famous and legendary Black performers who lined the walls of this infamous theater. I stared dumbfounded, and remembered seeing so many of them perform on television when I was younger. I just couldn’t believe I was covering this once-in-a-lifetime event. The Jacksons returning to the same place they played as The Jackson 5 forty years ago gave me Goosebumps.  In my mind, I saw an image of five afro-wearing kids with cherubic cheeks rubbing the sacred log for good luck one by one as they took the stage to impress an audience who’d only moments before booed some horrendous singing group that Sandman Sims just put out of their misery.  Their triumph then carried over into millions of albums sold, and stature as an American music institution.  Now their return is somewhat of a homecoming, reaping their reward from a New York audience who still worshipped them and their songs.  I was surrounded by folks from age 3 to 90; Young Asian ladies wearing sequins dresses with Michael’s likeness designed into the front, a Brooklyn grandmother with sneakers that had a hand-drawing of Michael from his “Black or White” video, and men from the Middle East wearing “Beat It” jackets with gold zippers. These people were ready for a spectacle more so than a music show, and considering the Jacksons’ reputation and incomparable record sales, they had good reason to. Everyone in attendance were anxiously waiting for the curtains to rise and the Jacksons to emerge. I certainly was excited and ready for the performance of a lifetime!

Song #1: “Can You Feel It”
The lights go down and there’s an instant reverberation of screams and roars. My heart is jack-hammering against my chest plate as if it was trying to claw out of my body. I pulled the camera up to my chin, afraid my beating heart will knock it right out of my hand. Within three seconds, the curtain slowly rises. A dense fog covers the stage; I bring the viewfinder to my right eye while, ‘here they come, here they come,’ repeats in my mind. The fog quickly clears and the four shadows reveal themselves to be Jackie, Marlon, Tito and Jermaine Jackson. Dressed in sleek regal type wardrobe – no doubt a tribute to Michael – and donning sunglasses, they posed before their devoted fans who confirmed their adoration with an unwavering stream of hollering. Then the beat drops. The deep, driving bass of “Can You Feel It” shakes the auditorium as the four brothers take off their glasses and slowly step toward the front of the stage. I’m frantically taking snap after snap after snap, battling the New York Times and Amsterdam News for position on the right side of the orchestra section seats, holding my camera high above my head to escape the obstruction of the 1,506 people all standing and jumping. Each brother alternated shots on the verses and chorus, ordinarily occupied by Michael and Randy for this song (Randy declined to participate in the tour). As they were passing the vocal baton, I’d found an opening under the right balcony seats in between two fans. I shot with a clear sense of purpose, forcing my idolization down deep into my soul and replacing it with a desperate sense of professionalism. The band was tight, blasting out the horn-driven fanfare that made that song a classic. 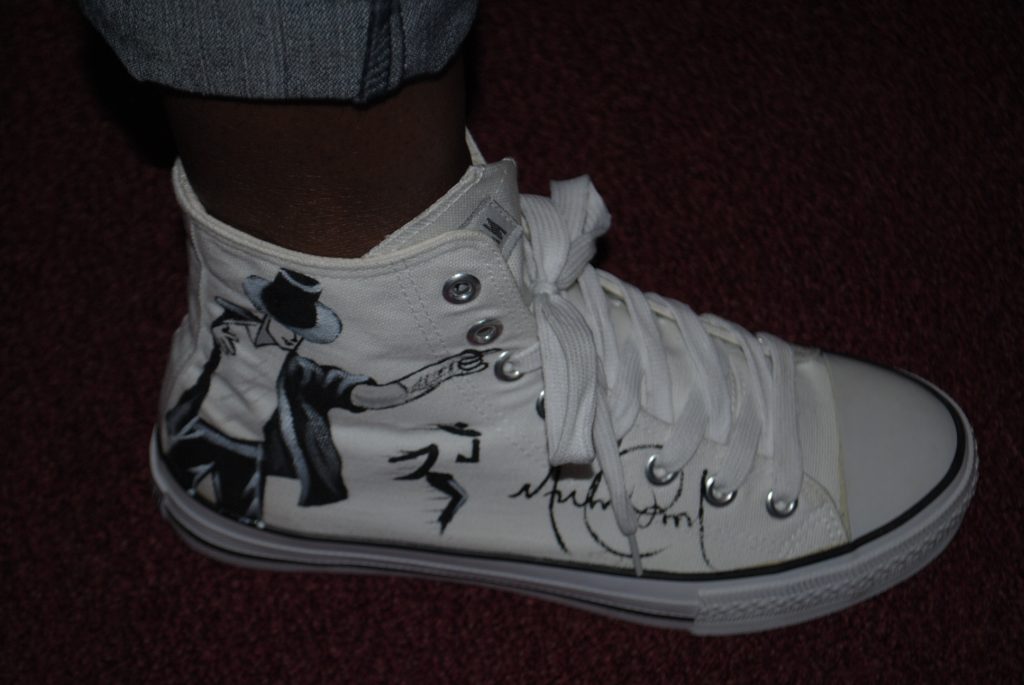 Song #2: “Blame It on the Boogie”
Tito’s funky staccato riff of dance smash “Blame It on the Boogie” sent the audience into frantic frenzy that I didn’t think was possible at that point. Jermaine took the reigns on this cut as the other three Jackson brothers gleefully danced behind him. The view from the opposite side of the orchestra under the balcony didn’t prove as successful as the right side had; the glaring spotlight darkened what was an otherwise perfect shot of Marlon spinning on his tippy-toes. The Jacksons were fully immersed in their signature choreography style, mixing freeform improvisation before conforming into rigged routines at strategic points of the song; something they’ve mastered since their late days in Motown. I, too, am in the groove, finally getting the hang of the manual focus on the D3100. This was no longer a case of point and shoot, and simply pick the best of the bunch. I almost completely divorced myself from the lifelong Jacksons fan by this juncture, shooting away, searching for better angles that New York Times wouldn’t think of. Caught up in the competition, the audience continued to sing so loud, it was nearly impossible to hear the brothers. When their mouths moved, all I could hear was the masses behind, in front and above me harmonizing, “Don’t blame it on the sunshine/don’t blame it on the moonlight…”

Song #3: “I Wanna Be Where You Are”
The second song fused into the third, and my thoughts were, “Oh, man, that’s my soooooooooonng! Oh, man! It’s the last song.” This was it, the three song limit was imminent. Although disappointed at my luring departure, I had to continue the job. But, I engaged in a silent prayer that the Jacksons would go into a 10-minute version of Michael groove heavy 1972 solo hit.

In the interim, I saw Jackie and Marlon were hit right on point with the song’s original dance routine…. crossing their legs in place while snapping to the beat. It was reminiscent of their performance at the Save the Children Festival in 1972 (a YouTube video that I religiously watched for years). Jermaine was also in his element. He completely engaged the crowd and crooned for his people as the stage lights reflected off of his white sequined outfit – reminiscent of a disco-ball. Once they reached the vamp out, “I wanna be, I wanna be, ohhh…” time was running short. Any second the clock was going to strike 12 and I had to leave the ball. Oh, but then… 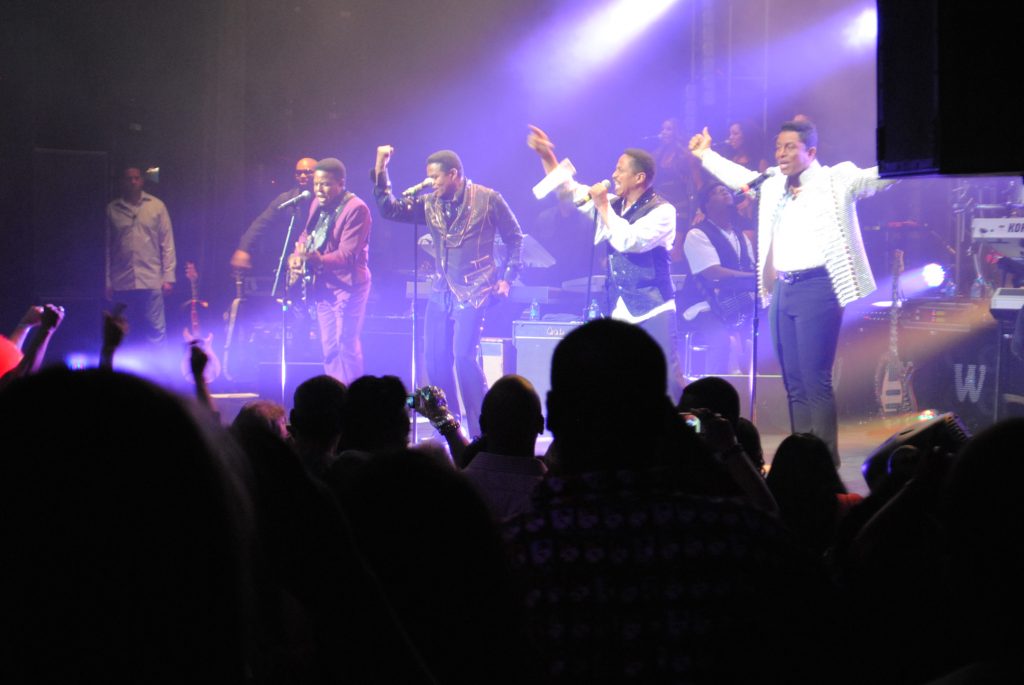 The Jacksons perform at the Apollo Theatre

Song #4: “Rock with You”
…Jonathan “Sugarfoot” Moffett broke into that hallowed drum roll the world knows by heart, just as he had on The Jacksons’ Triumph tour and Michael’s This is It rehearsals. I looked behind me on the left side of the orchestra section and no Apollo security and execs were summoning me to leave. Here we go! I was going to stay until someone grabbed me by the collar and dragged me out. Luckily no one did as Marlon took center stage to slide into that first line the way he had been sliding across the floor all night, “Girrrrrrl, close your eyes/Let that rhythm get into you…” For obvious reasons, all the songs were in different keys to accommodate the brothers’ voices since they were singing songs that were originally recorded with Michael’s high tenor. As a result, Marlon and the Jacksons never looked uncomfortable, owning the material and attacking it with power and gusto. In this moment, they reminded the audience why they demanded so much attention in the first place. They were The Jacksons, masters of harmony and execution. They knew how to entertain, with or without Michael. They knew they were stars, but more importantly, they knew what the real draw was: the songs. The songs were the stars and the fans got just what they came for.

Song #5: “Show You the Way to Go”
The brothers took that harmony and execution up a notch during this number. I caught the Apollo attendant making her way down to me and the photographers in my peripheral vision, so I took 10 seconds to put the camera down and allow myself to be in awe of the choreography, the voices and gorgeous Gamble and Huff guitar licks and strings soaring above my head. Slowly I smiled and absorbed the music and the musicians. I was never going to see this ever again, and the pictures weren’t going to be enough of a reminder. So I stopped, opened my eyes wide and made myself a memory, singing “Let me show you, let me show you the way to go.” On the day Michael died, this was the first song I listened to see if I could handle hearing his voice. I could. I called upon that same relief as I had to depart barely halfway through the second verse. There were no regrets, no disappointment.

As I set myself up to leave, the other photographers were coming up to me, asking me which was which brother. They must’ve recognized my small spurts of fandom during our brief battles for position only moments prior, and now they depended on me to identify these legends. I obliged, completely flattered by the whole situation. All the while, I could still here Marlon and Jackie splitting the audience in half, instructing them to sing the chorus and find out which side’s the loudest. It occurred to me that I was in a privileged position. These other photographers were just doing another gig. And while I was nowhere near as skilled as they, nor did I possess comparable equipment, I had an advantage they didn’t: The Jacksons are my favorite singing group of all time. I knew what they might do when they might do it, when they would or wouldn’t move a certain way. I knew how they deserved to be shot. Did I do them justice? That’s not up to me. However, one thing I do know is those three songs have a deeper meaning to me now…along with two others that weren’t supposed to be.

Jimmy and Albert “Tootie” Heath—a jazz perspective over six decades in the making Pt. I