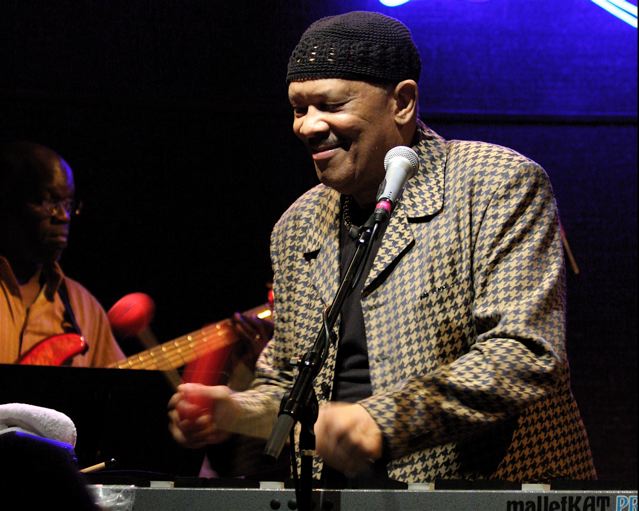 Many of the guys that influenced me have faded away. Miles Davis, Thelonious Monk, and John Coltrane; these are some of the great musicians that have been on this planet…. They never said a lot verbally, but they said a lot musically.

Without question, Roy Ayers continues to be an influence on several aspects in the industry. His innovative sound has made him an endearing part of the international musical spectrum. His work will go down in history as some of the most influential and significant musical contributions. In Part II of this interview, Roy Ayers talks about his sense of activism as an artist and his feelings about how New York City has influenced his career.

iRJ: You are considered to be an innovator in many regards. Do you consider yourself to be an activist?

RA: No. I’ve been made an activist. Over the years, I went from a creator of really fine music, and the music is still fine and really wonderful and I enjoy playing it. But I guess my reactions are like an activist because there is something to being an activist, thanks to all things that are being eliminated from our system; the system we live in. So therefore, I have to complain and express myself. And I guess I am an activist. But I am a musician first. And I have become an activist. But I guess if you listen to my music there are alot things I say in the messages that I deliver in my music. One of my strongest messages is “Everybody Loves the Sunshine”. I talk about life and liberty and enjoying the natural things in life, like the sunshine. That’s probably my biggest hit. And it’s probably been sampled by all the hip-hop artists including Mary J. Blige and Erykah Badu and Jill Scott. There are so many wonderful things that have happened with my music that has been inspirational to people. And that’s all good, I really appreciate that fact that they sampled my songs, but I guess I never claimed myself to be an activist. But I guess if what I am talking about is true and it is, then I’m an activist. They are reacting to a lack of air play, to the lack of a proper label and the labels have cut back. Everybody is selling CD’s now. It’s all about the money. Everybody is trying to make money. It’s a shame, because money has become the priority. I understand it. I’m trying to make money. I have to make money to live, to pay my rent and to pay my bills, just like everyone else. But the individuals that own and run the record companies, they have to be held accountable for all these things they are creating and have allowed to disrupt the industry. And I’m talking about all the major labels. All of them including some of the not-so-popular ones. They all do the same thing. And on top of everything, there are inaccuracies with reference to their statements.

iRJ: You’re originally from LA. How has New York influenced your career as an artist?

RA: That’s a good question. I am influenced by the world. I live in New York because it’s a wonderful place to work out of. I can go up to Boston, up to Canada. I can go down to the south. I can go across the water to Europe and other foreign countries. And I can go out to the west coast as I do on one or two occasions. But the west coast is kind of far and there aren’t that many jobs except for Los Angeles and San Francisco and occasionally San Diego. Nothing is happening in Arizona. And maybe every two years a gig in Las Vegas; so there is nothing happening out there. And there’s a gig in Seattle or Portland; but that’s every once in a while. But all the gigs from Chicago to New York, all the way down to New Orleans to all southern states, including Florida and Alabama, different places I’ve played; New York is a good base to work out of. When I was with Herbie Mann for four years, it was really wonderful working with him. I worked almost every day for the whole four years I was with him. The only days we were generally off were Mondays and Tuesdays and the rest of the week we would work. He was a workaholic and he passed away about 3 years ago. But he was a wonderful guy to work with and share the stage with. And had a lot of fun and met a lot of people like Chick Correa and Herbie Hancock; just wonderful guys. So New York is a wonderful base to work out of! And so many great musicians still live here. A lot of them have passed on. But there are still some great ones that are still here. I guess nobody really thinks about the musicians. Musicians are like the old soldier…General MacArthur. They just slowly fade away. Many of the guys that influenced me have faded away. Miles Davis, Thelonious Monk, and John Coltrane; these are some of the great musicians that have been on this planet. They have all passed away. It was a wonderful thing to have them in my life because they have been inspirational. They never said a lot verbally, but they said a lot musically. I guess I am an exception to the rule. I can see and feel the change. And it doesn’t make sense. A lot of people are doing a lot of things because of money, but I do understand that. But it’s a shame. They are not doing it because of art.

iRJ: Ahmir QuestLove Thompson called you the “Godfather of Progressive Hip Hop”. In your mind, what is the relationship between jazz and hip hop?

RA: I guess it’s all creation. I believe jazz and hip hop are both innovations from generally black people. And I’m not racist, but I’m just saying I believe black people are the ones that created it. They created the style. They created the form. They have been very innovative in the creation of these two art forms. It is a black thing. And I believe there are people out here who resent it, that don’t like it, that hate it! They hate it to the point that they are trying to eliminate it or cancel it out! And that is exactly what they are doing now, if you really check it out. There are a lot of things that are hidden now. It’s unfortunate. There are a lot of things that are hidden now…. that people hide. But racism today is hidden. It’s a shame because it’s a disease and people have it. It’s a damn shame when you really look at it. So a lot of things are hidden or covered up. But eventually it all comes out.

iRJ: The Roy Ayers Project is a very ambitious project documenting a lot about your career. What do you hope that project achieves?

RA: Well I’m not doing it. It is being done by a group of young artists in Oakland, California. These guys are doing a tribute to Roy Ayers. And they flew out to New York and they interviewed me for a couple of days. And they interviewed several other artists about my music because they are Roy Ayers fans. I am very thankful for these guys. It’s a wonderful thing because they are doing interviews of other artists that have played and performed with me. They are doing a special tribute to me. It’s a documentary. They are setting it up. It won’t be ready until the beginning of next year. They’ve got excerpts on a website. They are working on it long term. There are a lot of people that they haven’t been able to interview that they want to interview that I have been with over the years. It is an interesting project and I like what they are doing. I’m just involved with it enough to say, “Hey, how are you doing?” To learn more about Roy Ayers, please check him out at www.royayers.net.

By Mark A. Moore

Design Star! Danielle Colding Continues Her Rise to the Top