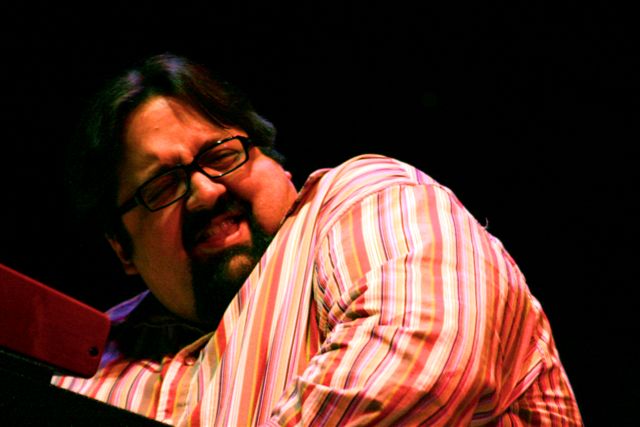 At the 11 PM set on a Wednesday night in New York, concertgoers got a lot more than they bargained for. Joey DeFrancesco’s trio consisted of Peter Bernstein on guitar, George Coleman Jr. on drums, and his father George Coleman Sr. on tenor.

The tunes that the band played included many standards such as, “Come Rain or Come Shine”, “It Could Happen to You”, a lesser played ballad “Nancy With a Laughing Face”, and they closed the set with “Bye Bye Blackbird.” Being the eldest of the band members, it was most natural that Coleman called the tunes that were played.

Three of these band members require no introduction in jazz—Bernstein having established himself as one of the most formidable guitarists on the scene, and both DeFrancesco and the elder Coleman playing alongside Miles Davis. But the younger Coleman, who took just one solo during the long set, responded beautifully to both the soloists and the rhythm section.

During this set, Jerry Welden sat in with the band for all but the first tune. For the last two tunes, DeFrancesco played muted trumpet and was able to play the melodies as well as solo. On “Bye Bye Blackbird”, Mike LeDonne happened to be in the audience and played organ so the bandleader could try his chops at trumpet.

People started exiting the club a little after midnight when the set ended, but I was preoccupied with this hangout of New York musicians who had all come to see the band play. As if that wasn’t enough, about an hour after their set ends, into the club walks Quincy Jones.

At the persuasion of the musicians and out of respect to one of the most important people in music, a private concert took place for Quincy, and the audience enjoyed a third set. Saxophonists Eric Alexander and Joe Farnsworth, established New York musicians, also joined the band.

The band first played, “Killer Joe” with an energy that was pervasive throughout the club. This must have been nostalgic for Quincy who recorded this song in 1969 with a big band that reads like a “whose who” in jazz. They gave it a Latin bridge. The band next played “Blues Up and Down”, off the Sonny Stitt/Gene Ammons album, “Left Bank Encores.” All the players took solos, but Weldon took an extended one, as did Stitt on the album—blowing for nearly 50 choruses.

Quincy walked up and gave a short speech, thanking the musicians for playing for him and saying, “This is what jazz is all about!” Indeed, it is.