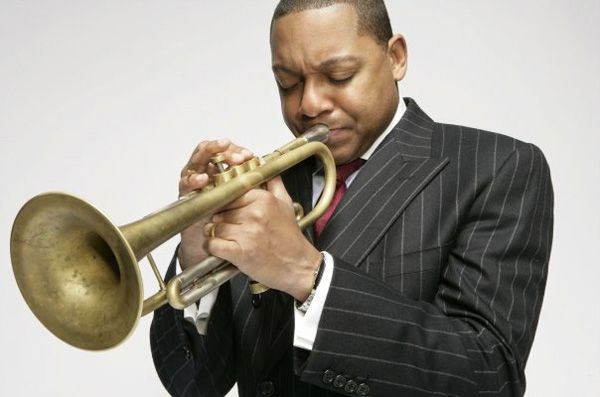 On Friday, April 27, The Jazz at Lincoln Center Orchestra, led by trumpeter Wynton Marsalis performed at Chicago Symphony Center, as part of the Symphony Center Presents Jazz series with a special tribute to bandleader Wynton Marsalis in honor of his 50th birthday—a yearlong celebration. The evening celebrated Marsalis’ compositions, ranging from the Pulitzer Prize-winning Blood on the Fieldsto some of his more recent compositions, including Abyssinian 200 Mass.

Marsalis spoke at length during the concert about his perspectives on arrangements for each song that he performed, the interruptions welcomed, a perfect introduction to his next selection.

This was the first of three consecutive nights for Wynton Marsalis. The performance summed up many of his achievements. Like all the best concerts on the Jazz at Symphony Center series, the house was sold out, the audience listened raptly.

Though he said, he was exhausted after a concert in Dayton, Ohio. The first half of the concert involved light, bright forays into classical jazz pieces. Marsalis dug deeply into bona fide jazz improvisation, reaffirming his stature as one of the most technically accomplished, intellectually provocative trumpet traditions.

Once Marsalis plunged into the Abyssinian Mass the 15 piece orchestra attained a new depth of expression. The linear clarity of Marsalis’ solos and the technical prowess of each player’s statements distinguished the night’s performance.

Wynton has been described as one of the best trumpeters and composers of his generation. He is a traditionalist; In Friday’s performance he systematically emphasized the value of tradition. The audience was swept away to former time, a time that predates Marsalis’ 50 years.

The audience was led to Jazz’s Golden Era. He told the tale of adventurous ground breaking musicians like Dizzy Gillespie, Thelonious Monk, Charlie Parker and John Coltrane with his trumpet. Before arriving at Jazz’s Golden Era the audience led by Marsalis through the gospel tradition.

The JLCO was able to fuse the talents of 15 exceptional musicians with that of its bandleader Marsalis creating a consistency that carried throughout the entire performance.

Note: In honor of his 50th birthday, Marsalis released Swingin’ into the 21st Century, a compellation of his 9 albums; its available in a boxed set on his website. There is also a CD featuring selected tunes available.