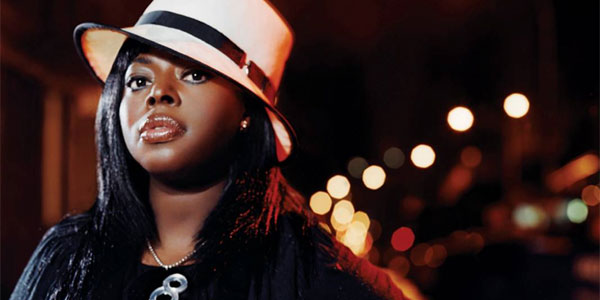 Two Lady of Soul Awards, five Grammy Nominations and four Top 10 R&B albums are just a few career highlights of musical talent, soul singer and prolific songwriter Angie Stone. With hits ranging from “No More Rain In This Cloud” to “Brotha” and “Wish I Didn’t Miss You”, fans are consistently reminded of what raw, honest music sounds like. Stone candidly discusses love, life and music with iRockJazz.

Wanting love and being in love is universal, no matter who you are. Stone admits that she is in love, and shares a story about her current love interest, Ashanti, who she’s dated over the last seven years. When they first met, she says, “I wasn’t looking for love or anything like that. We met in an airport, had a conversation, exchanged numbers and it went from there.” They were living in different states at the time, ended up reconnecting in Atlanta and eventually moved there together. As with any relationship, Angie admits they’ve had their ups and downs but have pulled through and are in a great place. “Oh I enjoy being in love,” she responds. “Companionship, having someone to talk to, support you and help you make decisions,” she states are some of the benefits of being in love that she enjoyed most.

Talks of love for her fiancé Ashanti quickly transitions into a conversation about love for her family. She and Ashanti both have two children from previous relationships. When asked about how the blended family works out for her, she assures it’s not an issue. “I love my family…the blended family works great. All the children have their own rooms in the house, and when they get together they have a great time.” This proud mother mentions how each child is very talented; her oldest daughter has even done lead and background vocal appearances on her several of her albums. Stone shares, “Sometimes my daughter doesn’t feel like I push her enough to get out there, but I use highlighting her on my albums as a springboard for her. That’s my way of letting her know I have her back.” She thinks her daughter, as well as the other children are amazingly gifted, and says they all have a bright future ahead of them.

Of course, the conversation on love had to change focus to Stone’s past love. She dated R&B/Soul crooner D’Angelo early on in her solo career, and he is the father of her son. Rumors and speculations ensued soon after their romance became public knowledge. “Nobody even gave a shit at first. It wasn’t until he became a star that people even took notice of who I was dating. By then, I was already four years deep into the thing.” Stone explains it was easy to move on because she knew the truth. “The media wanted to paint a picture like I was so in love with him, but it was really the other way around. D’Angelo was in love with me and still has a strong love for me as the mother of our son.” She has since moved on and found happiness with Ashanti, and D’Angelo has done the same in his personal life as well as in his musical career.

There is no arguing that Angie Stone has made her mark in the R&B Soul music genre. Before launching her solo career, Stone garnered success with the all-female trio the Sequence and as lead vocalist for Vertical Hold. I was interested in how she felt about being nominated for awards such as the Grammy’s. “I don’t feel anything when I find out I’ve been nominated for an award. I understand the politics that goes along with those award shows and learned early on not to get caught up into it.” She admits of course it feels good to be acknowledged, but she can’t base her career off awards. This frame of mind has allowed her to stay true to herself and her music.

With all of her accolades and accomplishments she simply views life right now as purposeful. She acknowledges walking in your purpose and allowing others to do the same as one of the biggest lessons life has taught her. “You know, my current manager had no experience, but I gave him a chance. Now, he is doing an excellent job.” She believes that is what life is all about. Living your purpose allows you to give and help others to live theirs as well.

When it comes to inspiration, Angie confirms her father, who passed away a few years ago, will always be her inspiration. Musically, however, she loves all kinds of music and artist. Ne-Yo, Betty Wright, Patsy Cline, Celine Dion were just a few she named. When it comes to the one artist she would love the chance to work with, she quickly named Lauryn Hill. “I would want to be in the studio with her. Even if we never put it out…I would just love to work together and vibe.” Lauryn Hill is a talented individual, and Angie says she likes to explore the unexpected.

Fans can expect to see her out on tour this summer. In August, she is set to do a concert with jazz musician, Robert Glasper. I asked her thoughts on Glasper’s latest CD where he blends jazz with hip-hop and soul. “Mixing jazz with other genres is nothing new,” she replies. “I’ve been singing jazz and doing that since the beginning of my career.” Stone explains that most genres are rooted in the church. The church is where most of your musicians and singers are first influenced. That is where the “soul” in the music comes from.

Angie Stone firmly confirms, “I don’t know what neo-soul is. I am an R&B Soul singer.” From the looks of it, this soul singer has no intentions on stopping any time soon. She is slated to release her next studio album later this year entitled Rich Girl. The first single off the album is “Do What You Got To Do”. We can also expect to see her back acting on the big screen, as she spilled that she is working on a film.

For those who want to know more, make sure you connect with her on Facebook at Angie Stone and on Twitter at @RealAngieStone.