YOU ARE HERE:Home » Interviews » Avery Sunshine: Everybody loves the Sunshine
Interviews 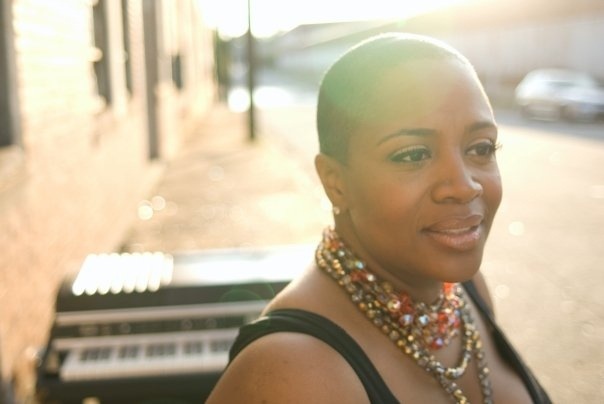 Denise White wasn’t thinking of the words strength, light, and bright, when she decided to adopt the name Avery Sunshine. According to Sunshine, she now personifies all of those qualities.

When she looks at her life, she wonders how she does it all. “I’ve reached that Avery Sunshine part of my life,” she explains. It includes ministry. It’s not a difficult transition for her to come off tour and go right to church. “I’m hoping to shed some light on a situation for somebody,” says Sunshine.

She still works a day gig. She’s choir director at legendary Ebenezer Baptist Church in the “Sweet” Auburn district of Atlanta; the same place where Dr. Martin Luther King and his father used to preach, and at Zion Hill Baptist Church also in Atlanta where she currently resides, by way of Chester, PA. She has two children, a daughter twelve, and a son 10. Her parents moved in with her to help care for her children, while she’s on tour.

When I spoke to Avery Sunshine, she was returning home from shopping for flats, shoes that she could wear to navigate comfortably airport terminals; her traveling schedule has increased tremendously since the debut of her self-titled release, Avery Sunshine. Next, she’s off to London for a scheduled performance on a gospel television show that was arranged by her record label, Dome, which is located in the U.K.

Sunshine writes with her partner Dana Johnson. “When we first started touring, we’d get in my Kia Rondo and drive up and down the east coast; he’d pick up the guitar, and I’d sing; we’d write songs like that.” Many of the songs on Avery Sunshine were created this way.

They would head south along I-95 to Florida, and then from Florida back north to Connecticut. “We’d go from one song to the next, they’d flow,” says Sunshine. They’re in the preparation stages for her next release. It’s difficult for her to find the time to stop moving, and write due to her touring and the promotion of her current release.

Sunshine began playing the piano at the age of eight. The first piece she learned was Beethoven’s Für Elise. It was her idea to play to piano. Her mother warned that if she bought her a piano she was going to play. At times, she lost interest, but her mother made her stick to it.

Sunshine focused so much on playing the piano, “I never thought I was a good enough singer to sing; I would sing out of necessity”, Sunshine admits. “I would sing out of teaching somebody parts of a song”. She can’t remember anyone saying that her voice was good, that part is a blur, according to Sunshine. “People always talked about my piano playing. She can recall her sister commenting that she sang too loudly, she recalls fondly. Sunshine is grateful for the compliments she receives now, but admits, she’s learning to accept them.

Avery Sunshine attended Spelman College, her major started out as piano, but after four years, she changed her major to philosophy. She regrets the decision because now, she doesn’t have a music degree. She would have to go back to Spelman to take one more class in music to have a music degree, “I have a degree in philosophy, how about that,” says Sunshine.

What she appreciates most about her college experience is the dedication to a genre of music, which happened to be classical. “There was a theory behind it,” says Sunshine. She appreciated the consistency. According to Sunshine, her classical training taught her musicality, “I absolutely appreciated that,” she adds. “What I didn’t like is that they really didn’t encourage anything else; there was no outlet for R&B or Gospel. She explains, “I had to find my way.”

“I do soul music – that other thing”. She says that jazz wasn’t really her thing in college. “I respect it and love it, but it wasn’t really what I did. I felt that it was no place for me as a pianist and a vocalist in college. That’s part of the reason she left Spelman’s music department.”

“I didn’t feel like a jazz or a classical musician,” says Sunshine. The jazz influence is there, but by no stretch of the imagination would she put herself in the same category of artists she’s worked with, like Roy Ayers, and bassist Christian McBride, whom she describes as “other worldly musicians.” Roy Ayers and Sunshine perform a duet on track 3, titled The Most.

Chris McBride and Avery Sunshine’s first collaboration happened over 23 years ago. It was a recital, they performed Satin Dolls. She was 13-years-old. It was one of the first recitals she’d been a part of; she recalls that McBride was a serious musician even way back when.

It was never Sunshine’s goal to become a solo artist. “I wanted to be in the background,” says Sunshine. “I had a few people tell me you’re really doing it, you always said you were going to do this, “I don’t ever really recall me saying I was going to be doing this, this is something different,” says Sunshine.

The moment she decided to become serious about becoming a solo artist was when her partner, Grammy award-winning writer, Dana Johnson urged her to become serious about a music career. “Dana went to Morehouse; I went to Spellman. We were in the same circle, that’s how they met.” Johnson and Sunshine created an EP with three songs on it. Ugly Part of Me was one of the songs.

“A friend happened to be listening to Ugly Part of Me at work, Earnest Davis who is in the radio business happened to hear it. He inquired about the vocalist, he wanted to know who that person in that song was—that was four years ago, and the rest is history.” Davis helped Sunshine finish her self-titled album. Davis now serves as a partner, he’s the marketing brain. He’s a huge part of Sunshine’s success.

Sunshine says she’s a loner but her parents brought her up around so many people.” This is why I’m able to get on stage and interact. I do love people.”

Avery Sunshine shares that she is in love; “I don’t say much about it, I’m not ready to bring it out yet. He’s my best friend. We were friends first. “When you’re in love that is all you can think about. That’s all you can talk about, just like pain.”

Admittedly, Sunshine wished she wasn’t affected by love this way. “I try not to write when I’m on the outs with him ‘cause some of that stuff comes out a bit dark.” One of the songs on the album Like This, the lyrics are—I remember meeting him for the first time… “In the shows, I always say when I meet my baby daddy I’m going to sing this song,” says Sunshine. If I ever have this chance again I must say I’m so happy that we crossed paths; my friend, I never knew it would be quite like this that something so wonderful would come from a little ole kiss….

“The best way I can express that this love thing is real is to sing about it. I believe that anytime we’re in love it’s real. It may be for a short season, but I do believe it’s real. Love can shroud things. I absolutely believe in love, and I will continue to write from that place – love for my companion, love for my children, my love for God, and for myself,” says Sunshine.

Sunshine’s songs come at the strangest times in the middle of the night when she’s asleep. She’s lost many songs because she didn’t write them down when they came to her like a revelation at 3:00 a.m. “When I try to find that place to write it doesn’t work,” says Sunshine.” She can’t work in manufactured formulaic environments.

A humble artist like Sunshine has a difficult time acknowledging the qualities, which makes her voice distinctive. She’s working on accepting compliments so that her daughter and son are able to talk about what’s great about them and love themselves. “I like my phrasing and tone. I owe a lot of that to listening to Whitney Houston and Luther Vandross who would sing a line and it sounded like warm chocolate,” says Sunshine.

It is what she describes as “flat foot singing,” which she likens it to women in church who would sing about God, music was so much a part of them, they’d ooze musicality. “You either have it or you don’t, Donny Hathaway was an example – you’re born with it,” says Sunshine.

She didn’t believe her album would be success until she got the numbers back from iTunes. The number of singles sold at that time was 10,000 units, “we knew something was going on,” she said.
“I would like to work with D’Angelo so bad, I can taste it and Michael McDonald,” Sunshine shares. She has something in the works with Ledisi, and recently created a track with Raheem DeVaughn. She also has something cooking with Musiq Soulchild. “Michael, wherever you we are, we have to do something,” says Sunshine.

“I want to be able to perform until God calls me home; I want to work. I pray to God that I live and work until I transition like the late great Lena Horne or the late Shirley Horn,” Sunshine shares.
For more information on Avery Sunshine, check out her official website, averysunshine.com.

Terence Blanchard: The Man with the Crescent Touch