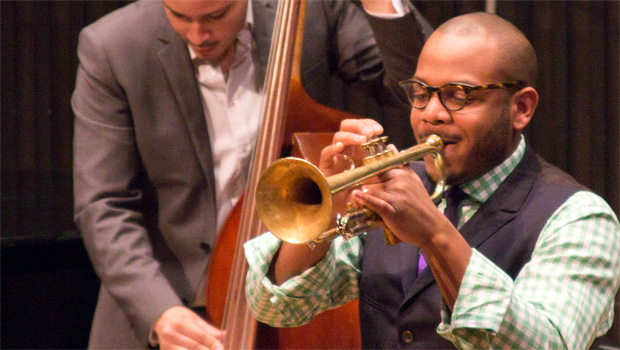 A sold out crowd packed the house at Stanford University’s Campbell Recital Hall to experience the melodic, Caribbean flavored sounds of the Etienne Charles Quintet during the Stanford Lively Arts 2011-2012 Performing Arts Season. Donned in his signature porkpie hat a la Lester Young, Etienne Charles, the progeny of four generations of musicians in the tradition of the cultural musical styling’s of cuatro, folk, calypso, steel pan and African Shango drumming, treated the diverse Stanford audience to an exhilarating 105 minutes of music, Afro-Caribbean history and folklore, and great conversation.

The quintet opened the set with an eclectic free for all that metaphorically resembled runners stretching before a race. After this collective fusion of individual sounds they transitioned superbly into a moody piece that showcased Charles on trumpet and Jacques Schwarz-Bart (Roy Hargrove, Meshell Ndegeocello, Chucho Valdes) on tenor saxophone. The elegantly mysterious song entitled Dance with La Diablesse, patois for “dance with devil woman”, is one part of a suite on Charles’ 2009 recording, Folklore. Charles performed selections from Folklore, his latest recording, Kaiso, and calypso arrangements.

Check out the making of Kaiso:

In the tradition of the vivid imagination of the African griot’s and the engaging sing-along style of the great calypso master’s like Lord Kitchener, the Mighty Sparrow, and the Roaring Lion, Etienne Charles wowed the crowd with his imaginative storytelling, educating the audience on the significance of his selections. The second tune of the night was a more upbeat and playful contrast to the opening tune. Douens, another selection from Folklore, tells the story of child demons whose feet are turned backward—kind of creepy, but it makes for imaginative visualization while listening. New Orleans piano maestro, Sullivan Fortner, Jr., who recently played with Roy Hargrove at Yoshi’s in San Francisco, (check out the review here) and has toured with Stefon Harris and Christian Scott, kept the pace intertwined with Charles’ trumpet play eventually fusing in an humorous impromptu interpolation of The Simpsons theme song. Charles’ then turned his attention to the congas and became a man possessed unleashing a rhythmic fury enhancing the tropical groove assisted by pulsing undertones by Hartford bred bassist, Luques Curtis. Charles impressive conga play is a testament to the percussive lineage of his father, who was a member of Phase II Pan Groove, one of Trinidad’s most revolutionary steel bands.

What is so enlightening about Etienne Charles’ performance is the abundance of colorful textures that provided a substantive experience with meaning behind the creation and then exhibition of each song. Charles dedicated a slow calypso called Memories to the April 4, 1968 anniversary of the assassination of Martin Luther King, Jr. A beautiful, reflective ballad that put on display Charles’ full range of trumpet play was heavy with emotion and breadth rendering a collective calm of the audience as it seemed all began to remember the legacy of those whom have passed on.

To round out the first set, Charles told a humorous quip about a song “The Mighty Sparrow” created after a fight. The audience chucked and didn’t put up a fight when asked to participate in the calypso call and response tune that requested them to sing the chorus line “Ten to one is murder”. The lighthearted song, which included an explosive drum solo by Miami native, Obed Calvaire, displayed the intrinsic cohesion of the quintet’s sound and the apparent fun they experience approaching and interpreting Charles music.

As Assistant Professor of Jazz Trumpet at Michigan State University, Etienne Charles keeps busy with teaching, but also keeps a hefty performing schedule. He is currently touring around the US and abroad. His latest offering, Kaiso, has received notable reviews from Down Beat magazine and The New York Times.

Founded in 1969 at Stanford University, we produce and present music, theater, dance, spoken word, and multi-media events. We place a special focus on innovation and risk-taking, and through commissions and premieres are an incubator and destination for new work. Stanford Lively Arts plays a leading and collaborative role in the university’s thriving vision of a sustained culture of creativity – one in which the arts integrate with the academic disciplines, flourish as a vital part of campus and community life, and inspire new perspectives on our lives and culture.