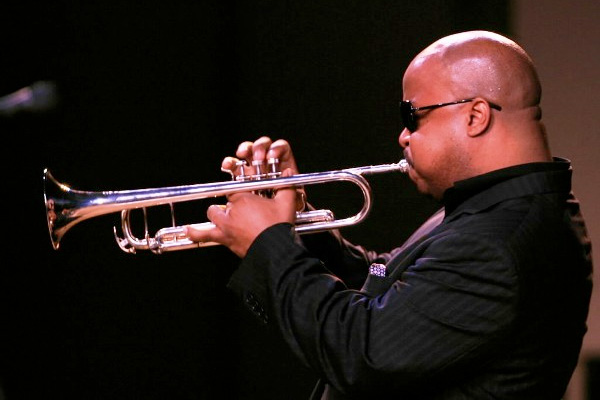 The extraordinaire Nicholas Payton played with a twenty-piece ensemble as he debuted his own big band, the Television Studio Orchestra (TSO) at Chicago’s Symphony Center. The entire group took to the stage, each member adorned in black from head to toe, with the exception of Mr. Payton – in his white sneakers. The audience saddled in for an incredible genre-bending journey through Payton’s compositions.

The night began with what sounded like a tribal chant, a vocal duet between Payton and featured songstress Johnaye Kendrick. The opening was almost celestial, followed by the full ensemble blending in, kicking off the evening with “Backward Step”. Payton would go on to lend his vocals alongside Ms. Kendrick on a number of tunes throughout the evening.

The second composition, “Aria”, was nothing short of an adventure – beginning with classical baroque, shifting to a funk/soul groove, moving into a slow and mellow samba, and finally giving way to a blazing samba. Once again, the vocals of Ms. Kendrick enraptured, and Payton did what he does best on the trumpet.

“Tiger Rag” marked a true Mardi Gras moment, as audience was transported straight to the streets of Payton’s own New Orleans. The often-reserved CSO audience was moved to calling out to the stage, and at any moment, you felt (and hoped) that someone might get up and dance in the aisles – so you could join them.

The evening ended with a piece entitled “Congo Square”. It began with a riveting extended drum intro by 26-year-old Marcus Gilmore that evoked the mystery of and reverence for all those who so long ago sang, danced, and played in the famed location. In true New Orleans fashion, the Spirits were with us.

Find out more about Nicholas Payton, his latest release Bitches, and concert dates at nicholaspayton.com.