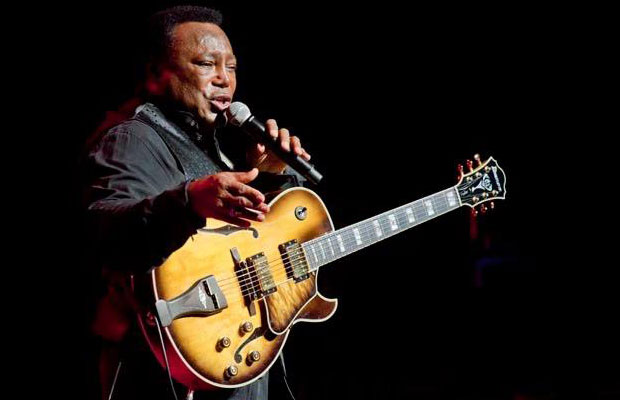 There is probably no musician within the broad encompassing label of jazz who is more of an enigma than guitarist George Benson. Is he a jazz or R&B singer? Is he a pop, straight-ahead jazz or contemporary jazz guitarist? Is he serious about the idiom or just all showmanship and Las Vegas glitz?

For those fortunate enough to obtain tickets to his March 23rd performance at the Chicago Theatre, chances are that none of those questions were answered to full satisfaction as Benson continued to be not easily defined as one of the most popular and satisfying performers in all of the above music genres.

Benson treated a packed house to more than 14 of his biggest pop, jazz and R&B hits – in a career spanning nearly 50 years. After a quick introduction by the show’s emcee, Benson’s six-member band wasted no time breaking into his smash platinum instrumental hit, “Breezin’.” After getting the audience swaying back and forth to the Bobby Womack and Gabor Szabo- penned tune, Benson moved directly into the vocal R&B hit of “Love X Love.” His vocals struggled a bit throughout the song, especially trying to hit the higher register notes, but Benson assured the audience that his voice would get better as the concert progressed. He kept his word and did not disappoint.

One of the most touching moments during the concert was Benson going into an impromptu guitar solo rendering of the gospel classic, “He Looked Beyond My Faults.” Shouts of “Amen!” and “Praise Him!” filled the Chicago Theatre’s air as Benson made his guitar sing on the level of many gospel vocal greats.

“Moody’s Mood For Love,” “Turn Your Love Around” and “Kisses In The Moonlight” (among others) were rendered superbly in versions that didn’t veer too far from the studio recordings.

Benson’s ebb and flow of jazz ballads, fast-temple dance jams and lush Brazilian sambas reached a crescendo when he started the guitar and scatting intro to his classic ballad, “This Masquerade.” Women – and some men – screamed out in delight as Benson took his time – via vocals and guitar plucking – to describe a long sensual dance between two lovers whose romance was slowly disintegrating within the song. The band beautifully reproduced the song note for note with extended guitar and piano solos winding throughout the eight-minute plus performance.

Prior to Benson hitting the stage, sizzling Contemporary Jazz saxophonist Boney James warmed up the crowd with his blowing muses, while jumping in the audience and dancing with various female fans. The audience responded enthusiastically to James’ interpretations of Rufus’ “Sweet Thing” and Stevie Wonder’s “Creepin’.”

Benson is scheduled to resume touring in June, visiting selected cities in the U.S., Canada and Europe. The Chicago Theatre show proved that Benson still has the swagger and a broad musical scope to appeal to a wide-range of music lovers looking for a good time and great sounds.

PJ Morton: Throwback to the Future