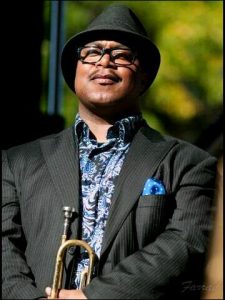 Nicholas Payton is regarded as one of the greatest trumpet players of all time. An accomplished musician, gifted composer, writer and producer, Payton was born in New Orleans into a musical family. His father Walter was a bassist, composer and educator and his mother, Maria, is a former operatic singer as well as a classical pianist.

Payton received his first trumpet at the age of four and was sitting in with bands when he was nine. By his teenage years, he was a earning his way as a musician and recognized as a young virtuoso. An accomplished pianist, bassist, and drummer, Payton also plays the tuba, trombone, clarinet and saxophone. These skills fervently demonstrated in his 9th and most recent album, Bitches.

Though his music is rooted in the jazz genre, you won’t hear Payton say he plays jazz. In fact, he is refusing to say the word at all. It’s a 90 day sabbatical to, according to Payton, bring attention to the fact that jazz needs to be given a little more respect. Payton has replaced the word jazz with the term Black American Music or BAM.

The BAM movement has stirred a lot of controversy, and iRockJazz caught up with its creator to tell us more about why he feels jazz isn’t cool anymore.

iRJ: How was BAM created?

NP: Everything got set off from the blog posts I made in November on why the J-word isn’t cool anymore. It was not my intent to start or create the movement. In fact, at that time there was no acronym BAM. I said for myself, I am a post modern New Orleans musician and others said they weren’t from New Orleans and that didn’t fit them. If not the J-word then what would be the appropriate title for this music? I came up with Black American Music and from there it started a movement and it sort of caught on and started this whole thing that we’ve seen.

iRJ: It seems that something that was defined as good has come under fire from divisions between musicians, race and more. Do you think critics are shooting the messenger and not looking at the message?

NP: To some degree. I’m not dividing anybody. I’m perhaps exposing divisions that have existed that people were not aware of. What is so controversial about what I’m saying? Isn’t this a well documented fact that the music they call the J-word is of the black community? Why is this offensive to anybody? To me that bring up all the reasons why there probably needs to be a change. If this is what’s lurking at the surface, obviously there is more to this then calling it the J-word. We’ve become conditioned over time and by repetition to accept certain things that we as artists shouldn’t have to accept.

Some folks feeling secluded have said, well, if I’m not black can I still play this music? I never said no one other than Black American could play this music. It’s for everyone. There have been many great people from all walks of life and cultures and beliefs that have been able to play this music.

It’s just recognizing where it comes from. Every culture has music that is indicative of their experience that they celebrate. Why black people aren’t afforded that same identity with the music? I think it’s a problem of black people not being looked at as American to some degree and not being able to own anything without others feeling they have a right to co-op it.

iRJ: Does BAM include other genres of music as well?

NP: That’s the intent. Gospel and Blues is what started it. They precede the music that became known as the J-word. Those are the root and foundation. The J–word took those things and made them a popular medium. What was folk, spiritual music and made it pop music. When it started it was all pop music and somewhere down the line it all got separated. It became more elitist and disconnected from all other black popular music. Some people ask what distinguishes it from Marvin Gaye, James Brown, Stevie Wonder or Michael Jackson. As I said, I don’t want to be separated from their music because the spirit of their music is the same as what I see in Louis Armstrong. That’s what Michael Jackson was doing on Off The Wall and Thriller, was the modern day version of his time when Louis Armstrong was doing when he recorded Hot Five and Hot Seven. When we talk about American popular music, there is no way to discuss it without discussing the black contribution.

iRJ: During an interview iRockJazz did with Christian McBride, he gave his thoughts on BAM. Do you agree with them?

NP: I thought it was a great article. What do I think of what he had to say (about BAM), it doesn’t make any sense. Life is contradictory, and he contradicts himself. He said BAM is just a terminology. Nothing is just a terminology. We speak and think in words. Everything we do is connected to a word. That’s how we communicate. He cites a great example of how we’ve evolved from, Negro to Colored to Black, to Afro-American to African American. My point was let’s go back to the first one which was Nigger. Yes, there’s been an evolutionary process. As we gained more rights and freedoms, the name changed with that. Isn’t the music the same? Then why not change this word. As we became evolved called something else as Black people, Black people created it. Aren’t we more deserving of a name more suiting and fitting for what we do then the J-word?

And the part where he says he’s not going to call it BAM because he already knows it as BAM. Well, if you know it as such then what’s the problem calling it that? Whatever you call it what can’t be argued is there is so much negative history attached to that word. It’s not a new argument.

iRJ: We have a rich history with no financial footing to continue to support it. There is no Grammy category for it. How is this going to happen?

NP: Let’s get one thing together first. This is relatively new. What’s irrefutable is it’s affected everybody. It’s changed the way everyone thinks about what they do. If for no other reason that this has been important is that. People need to start thinking critically and start thinking differently about this. This regressive thinking that heralds the days of yore and wants to hold on to things that has not served us is exactly what’s killing it.

They’ve eliminated many categories. Most of which are music of color. They’re already telling us what they think of it. In terms of the political system that’s in place? Why not have Black American Music category? Eventually, it should all be the same anyway. If we’re looked at in the same light as the other then people can see the connection between all of it.

iRJ: Was the title of your recent album Bitches album about a shock value or were you tying it in to Miles Davis’ Bitches Brew album of that time?

NP: I don’t do anything for shock value. I’m just me and I talk how I talk. People label it controversial. I’m just me. A lot of times I don’t filter and play the political game like a lot of artists do. Back in the day most cats were outspoken, but I think I stand out because others keep their mouths shut talking one way amongst one another, but saying something different in front of the media. I express my way in different ways. One day I might be quite profound and another day quite profane. Its how the spirit moves me and comes through me.

I called my album Bitches because a female friend of mine suggested it and I said, you know what…that’s it. Bitches is a love story that musically chronicles the joys and heartbreak of relationship. Bitches is like Bitches Brew in that it’s a similar type of break away from the idea of what a musician with the kind of history Miles had and the kind of history I have, suppose to do. It just happened to be released 40 years later. There is no musical connection. Nothing on the album sounds like what Miles did. And, certainly Miles never played all the instruments on the record.

iRJ: When you look at the legacy now, do you think the BAM movement will supersede your music?

NP: I don’t think about stuff like that. I’m an artist. I don’t even think of myself as a musician. I use a lot of different mediums to express art. I hope I’m perceived that I was honest and had impact.

I just share my love and knowledge of what I do with others and hope they get it.

Read more about Payton’s view on BAM on his blog, and visit his web site at nicholaspayton.com.