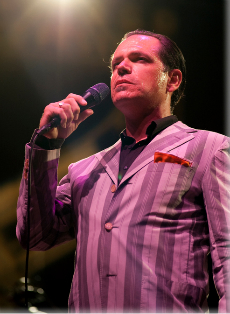 In many ways the Kurt Elling Quintet was just the kind of performance you’d want to see on Valentine’s Day at The Chicago Symphony Orchestra. Along with special guests, Violinist Regina Carter and Clarinetist Anat Cohen, Elling paid tribute to lovers everywhere as selections chosen for the evening were international ballads of love, lost and pain. It was Elling’s Passion World concert.

Elling informed his listeners upfront he was going to do his best to sing each piece in its native language. Though his story telling along the way helped provide some understanding to what the motivation was behind the selection, a verbal explanation wasn’t necessary. Whether or not you were familiar with French, German, Spanish, Italian, or Portuguese, (all the languages Elling incorporated), the meaning of each song was translated clearly through the brilliant efforts of the musicians that provided plenty of emotional energy and Elling’s four octave baritone voice which he developed singing in church choirs. Elling’s style is so effective. He paces himself, being careful not to rush the words, always in control even through the series of scats and vocalese.

A master improvisational violinist and a 2006 MacArthur Fellow, Regina Carter over the years has developed a signature style that is a mixture of jazz and soul that did not disappoint on this evening. She captured the audience with amazing solos in which she made her violin sing as she jerked to and fro as a fiddler would.

Anat Cohen is an Israeli born bandleader and composer. Her compelling performance on the tenor clarinet was consummate. She displayed tremendous energy and enthusiasm throughout her performance,

Among the world’s most legendary jazz vocalists, Elling has been named “Male Singer of the Year” by the Jazz Journalists Association on half a dozen occasions in the past ten years, and he has been the recurring winner of the DownBeat Critics Poll for the past several years. Elling’s current album The Gate received the Grammy nomination for Best Vocal Jazz Album this year. Visit Kurt Elling online at kurtelling.com.