Anyone recently introduced to the music of award winner Rene Marie would find it difficult to believe this jazz vocalist did not begin her professional singing career until the age of 42. Marie’s story is one of courage to follow a dream. She married at 18, and focused on raising her two children. Though she still enjoyed singing, and did so as a family around the house, Marie and her husband were members of a strict religious group and therefore was only allowed to sing occasionally in public. Well, like most passions, you can’t suppress them for long. The yearning to pursue them becomes too great and Marie wanted to sing more. It was when her husband of 23 years gave her the ultimatum to give up the music or leave the marriage that Marie left with songs in her head and an intense conviction in her heart to do what she loved. What was to come next was a journey that taught her how to live successfully in her own truth.

So who is this woman whose soulful interpretations and mesmerizing performances makes people shake and shiver like they’ve been placed under a spell? iRockJazz learns more.

iRJ: Do you feel the jazz community saw you any differently because you started your singing career later than most and became so successful? 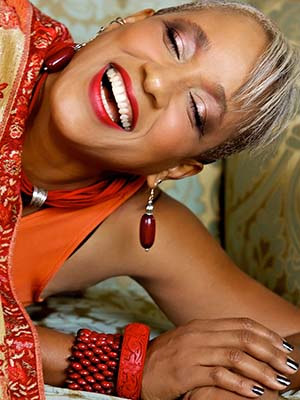 RM: I’m certainly glad I didn’t start any earlier. I was quite impressionable as I think most women are in our 20’s and even into our 30’s, but honey by the time we’re in our 40’s it’s a totally different story. We are not willing to tow the line; we’re not as submissive, if we were that way in our younger lives. We stop caring much about what people think. I know for myself, once I got into my 40’s, I was like wow, is this the halfway mark for me? It could be the 9th or 10th mark for me. I could die in three years or maybe tomorrow. I realized there is so much I haven’t done that I wanted to do. Let’s get going. I just make sure the steps that I take live in me as being my truth. You can tell when you are doing something to please other people versus living your own truth. Sometimes it’s the fear that, oh, they are going to be mad. That’s how you know you’re living the truth because you are scared everyone is going to be mad at me. I’m glad I didn’t get started any earlier because (laughingly), it would have been a mess. I would have been a mess.

iRJ: You don’t label yourself a jazz singer, yet most of your style incorporates elements of jazz, soul, blues, gospel, and even country. What do you want to be known for? What do you consider your style?

RM: A storyteller, a seeker of truth. It’s my divining rod. Something has to resonate with me as truth before I’ll follow through on it. It hasn’t always been as clearly defined as it is for me now. As when I first started out, I didn’t know what my truth was, so I was all over the place. Saying things other people told me I should say about my singing and doing things they told me I should do during an interview. So I tried it, and it just rang false for me. I thought there is enough bullshit going around already. I don’t want to add to the bullshit. I want to try and help clear the air at least as far as I am concerned. There are other people, other women, and other singers that are trying to figure out how they can do this. And, if I speak bullshit and don’t really tell the truth then where does that leave them? When I sing I approach my music the exact same way I approach my lovemaking which is with honesty, and some nervousness and a whole lot of excitement.

iRJ: You have attracted so many fans. People have said how much you’ve encouraged them and how your performances have even changed their lives. I think it’s the truth seeking that you speak about and being honest with yourself that may at the same time draw criticism. In 2008, when asked to sing the national anthem at a civic meeting in Denver, you substituted the lyrics to “Lift Ev’ry Voice and Sing” (the “black national anthem”) to the melody. Some people took offense to that. What is it do you think critics may not have understood about this creative change?

RM:  Let’s say you go to the Post Office regularly and there is a certain person there you are used to seeing in their uniform behind that counter. Then, you’re at a party somewhere and you see that same person’s face but you can’t quite place them. I know I know this person. Who is it? Something isn’t right. Putting those two songs together, The melody of “Star Spangled Banner” and the lyrics of “Lift Ev’ry Voice And Sing,” you could tell by looking at the expressions on people’s faces they knew the words and they knew the melody. You could see people being confused, which is fine. I think art should do that. I think as musicians we should know where the line is drawn and then cross that line deliberately and not keep doing the same thing. I want you to be disturbed and not all the time and not throughout the entire concert. My whole thing is, are you moved by what I’ve done? If you aren’t moved by it, then I have not touched that emotional G-Spot I know you have. I know you cover it up every day, but when I’m there, I don’t want you to cover it up anymore.

iRJ: What do you think is the single most challenge that jazz artists face today?

RM: The single most? I have no idea. For me, it depends on what kind of gigs I have lined up. Sometimes, for me the single most difficult challenge is continuing on when the pay is abominable and coming back home you feel beat up, beat down, tore up, knocked down and you come home thinking, I just can’t do this anymore because it is hard. There are other times when it seems like the single most difficult challenge is simply staying true to my original music and not caving in. I really can’t speak for other musicians. I think we all share the same struggle.

iRJ: What’s next? How do you want to expand your brand? What do you want your legacy in music to be? 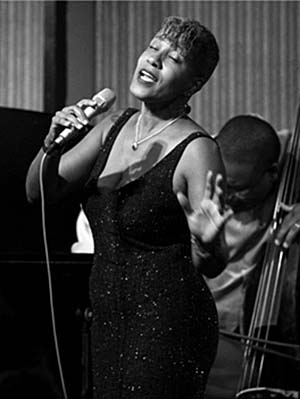 RM: Actually, this may be a boring answer, but I don’t look at it that way. I just can’t think like that and be creative too, because I think I have to approach it from a more organic way of looking at music. It sounds like a plan and I don’t like to have a plan. I like being inspired from one movement to the next and one step leading me to the next step.

iRJ: You have a very unique style. Was that done deliberately or have you always been fashionably put together?

RM: I don’t see myself that way at all. There is no put on. I’ve never felt anything I’ve done was a put on since I’ve been singing professionally.

iRJ: How much are you in control of your imagery and what you want to convey?

RM: When I was on the Max Jazz label I didn’t feel like I was very much in control. I had preferences and I also was led by what I thought I was supposed to do and supposed to be. I don’t have anyone to blame for that except myself. I was new to the game and new to singing in public. Since I left the label in 2004 I have gone through some serious changes of knowing who I am and being my own advocate of that and not being embarrassed or ashamed of it. The photos since 2004 do reflect my strong inclination for inner direction. I don’t like being told what to wear. I don’t like anybody telling me what my image should be. I guess because I’m in my 50’s I can get away with it.

iRJ: You used to have the High Maintenance Quartet. What happened?

RM: (Laughingly replies). They hated that name. I had to change the name of the group. The name started off as a joke because they are anything but high maintenance. The other name I wanted and they approved of was Experiment In Truth which really does reflect what we do on the stage and really off the stage.

Rene Marie is currently on tour at select cities throughout the country. For more on where you can catch her live visit her web site at renemarie.com.